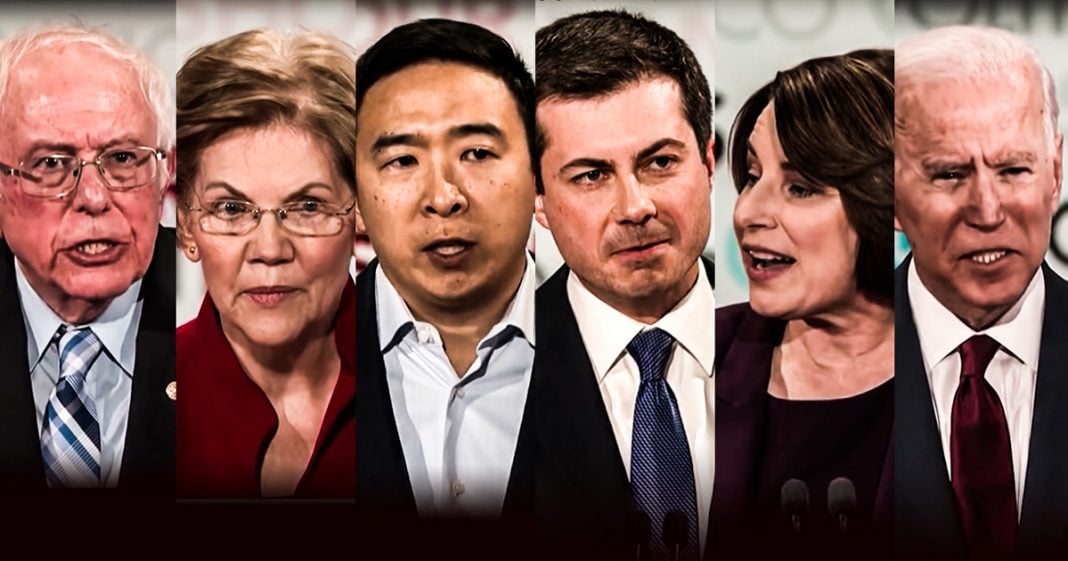 Joe Biden might still be leading in the polls, but the good news is that most Democratic primary voters actually haven’t made up their minds about who they will vote for, and 61% of “decided” voters say that they will likely change their minds before the vote in the primaries. This means that the nomination is currently anyone’s for the taking, and Ring of Fire’s Farron Cousins explains how to make the case for your candidate to attract these undecided voters.

*This transcript was generated by a third-party transcription software company, so please excuse any typos.
So there’s actually some pretty good news out there in the latest round of polling for the Democrats running for president as we head into the primary caucus season in just a couple of weeks here. And that good news is that it’s still anybody’s race. I know we see the polls out right now. I think the aggregates have Joe Biden ahead by six points over Bernie Sanders. Those two have pretty much maintained those top two positions. Occasionally Elizabeth Warren goes in there, she’s taken the lead at points, but she’s dropping again in the polls. Buttigieg kind of holding steady in single digits, but still in fourth place. Everybody else below that single digits with really not much of a shot or do they? Cause here’s the thing that these new polls found out and they were three different polls conducted that all found similar things. You had an NPR, PBS news hour, a Marist poll, and a Quinnipiac university. And of course, wow, a USA today suffolk university poll. So we have four different polls, not just three, but what they found is astonishing. And that is that close to 70% of Democrats in this country have not made up their mind about who they’re going to vote for in the primary. And of the roughly 30% who have decided who they’re going to vote for in the primary, roughly 60% of the 24% to 30% say they don’t know if they’re going to stick with that person. Meaning they are open 100% to changing their minds. So basically what this means all put together is that most people, with the exception of maybe 20 to 30% know who they’re going to vote for. Everybody else is up for grabs. So why is that good news, right? Cause that could mean Biden could easily win this thing with you know, 70% support because we have a chance right now to communicate better, to reach out to all of these undecideds and explained to them rationally, calmly and intelligently why our candidate is the best pick. And here’s how we do that. If you encounter someone who says, I support Medicare for all who want it, ask them what they pay in health insurance right now. Ask them what kind of medical bills they’ve had. Ask them if they or anybody they know, as Bernie Sanders has been doing on Twitter, has had to put off medical treatment because they simply couldn’t afford it. Even if they had insurance, then ask them, wouldn’t it be better to have a system where everybody’s just covered that there is no cost at the point of service and if they ask, well how are you going to pay for it? say, well, first and foremost, the Medicare for all program is going to reduce overall costs. It’s going to eliminate waste, fraud and abuse. We’re going to cut down on administrative costs. We’re going to negotiate drug prices. So automatically the system itself is cheaper. Now cheaper doesn’t necessarily, that’s how we pay for it, but then we do pay for it with things like a wealth tax. We pay for it with a payroll tax. We’re going to have to do that and that’s okay because it’s still lower than the premiums we’re paying now. For those who can’t afford that payroll tax, hopefully they will be exempted from it and we make up for that with a wealth tax. We cut the budget on some wasteful programs. For example, our $738 billion military budget could be cut in half and still be the highest military budget anywhere on the planet and give us plenty of money to get this program kickstarted. That’s how you address those, you know, we do see a lot, and this is coming from supporters of every candidate running for president. It’s not limited to just one, but people get mad. People get snarky, they yell, they they, they try to say, you’re an idiot because you don’t believe this. That kind of language and rhetoric, I don’t care who you’re supporting. We got to kind of put that aside right now, probably for longer than just for now. There are people out there who are reachable. There are people out there who are open. They want things to be explained. They want to get a better understanding of what’s happening. And it’s our job, you know, through these videos, through social media, through interacting with people face to face, to explain to them why our candidate is the best choice for this country. Almost 70% of Democrats in this country are willing to have those conversations and listen to us. We just have to do it in a way that is not condescending or disrespectful, and that is the best way to win these people over.