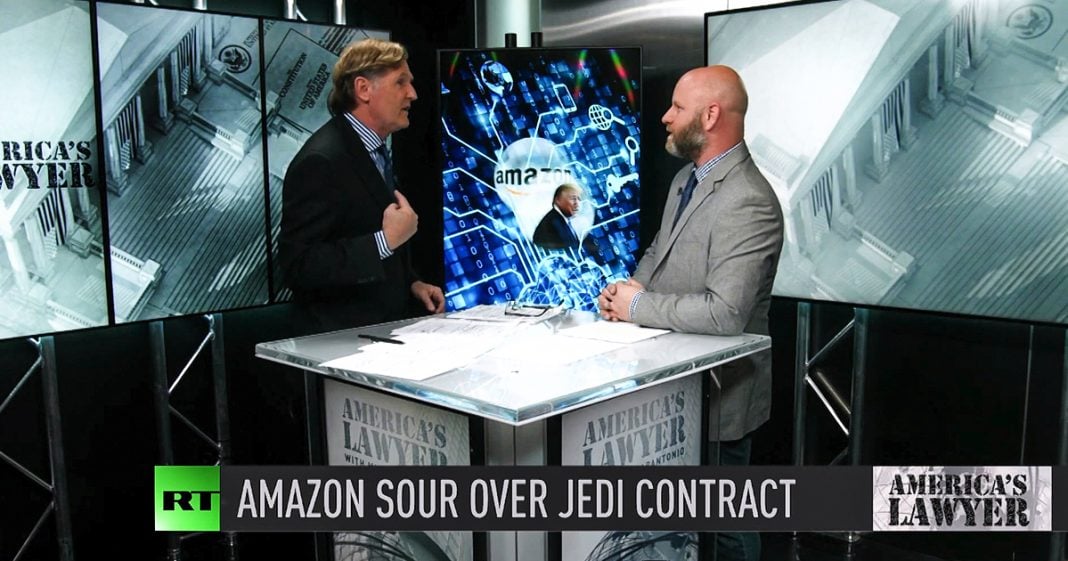 Via America’s Lawyer: Amazon is accusing the Pentagon of improperly awarding its highly-coveted $10 billion JEDI cloud contract to Microsoft, alleging the decision was based on President Trump’s bias against Jeff Bezos. Mike Papantonio and Farron Cousins discuss.

Mike Papantonio:             Amazon’s trying to claim that they were denied a multibillion dollar Pentagon contract because president Trump has a grudge against the company. Okay. This story is this, this is out in the, this is out in loonysphere. Let’s start from the beginning, all right. We know that the first contract that the Amazon got, tha Bezos got that it was a scam, right? We know, it was $600 million contract, we know that some of the players in that, in securing that government contract, they did the same thing with this government contract where they were looking for $10 billion. Right? They had an inside person, Amazon had an inside person working to try to, to try to shove this contract down the president’s throat, down Washington’s throat, and we find out you have a bunch of people that are on the inside operating directly for Bezos and Bezos says, oh, I’m really disappointed I didn’t get the contract. Really?

Farron Cousins:                  But, but that information you’re talking about that chain of people from Amazon into the Pentagon, that’s all from Mother Jones. You know, this is not, crazy.

Farron Cousins:                  But they pointed out that there were two people working in the Pentagon who used to be connected with Amazon, and what they were doing was they consistently and repeatedly changed the criteria for what you needed to meet in order to qualify to be considered for the contract. And then they were accused of actually sending information to Amazon about competitor’s bids and offers so that Amazon could counter the, the whole thing reeks.

Mike Papantonio:             Doesn’t it, isn’t this the crazy part? The white house can decide whatever they want.

Mike Papantonio:             That, there’s, the white house doesn’t have to give any reason for saying, you know what little Bezos, you’re not getting this contract because we found out that you were involved in all kinds of scams and skullduggery trying to get the contract. And yes, Trump does hate Bezos and yes, Bezos does hate Trump. That doesn’t change the, that doesn’t change the atmosphere at all. The president has an absolute right to do that. And for Bezos to bring this lawsuit, let me tell you what I love about it. Well, here’s what I love about it, the lawyers representing the white house in this case have like a free, they have a free road. They can dig into as much Bezos stuff as they want. That’s where we’re going to find the rubber meets the road in this case. If you think that Bezos is some kind of national hero, and my God, he ought to get the $10 billion contract because he’s Jeff Bezos, you don’t know the history of Bezos. Do you?

Farron Cousins:                  No, and to be honest, like I don’t know that I’ve ever agreed with Donald Trump on anything, but, but even if he had said, listen, I’m not giving you this contract because I don’t like the color shirt you’re wearing, I still would have said, you know what, I like that decision because Bezos cannot be trusted with these contracts. He’s been horrible with cybersecurity. Horrible with selling our data.

Mike Papantonio:             I mean, it was, it was millions. It was in the millions of people involved with some aspect of Amazon that we’ve, they got their social security number, they got their date of birth, they got all this inside information, and now Bezos says, oh, well we got that straightened out. Now we want you to give us the most vast security contract in the world.

Farron Cousins:                  Trust us with that, and meanwhile, look, Amazon should be broken up because they are too many things. They’re online retailer, they’re whole foods, they’re government contractor, and so for the government that then say, you know what, instead we’re going to give it to Microsoft. The people who just do computing. That actually does make more sense in that case.