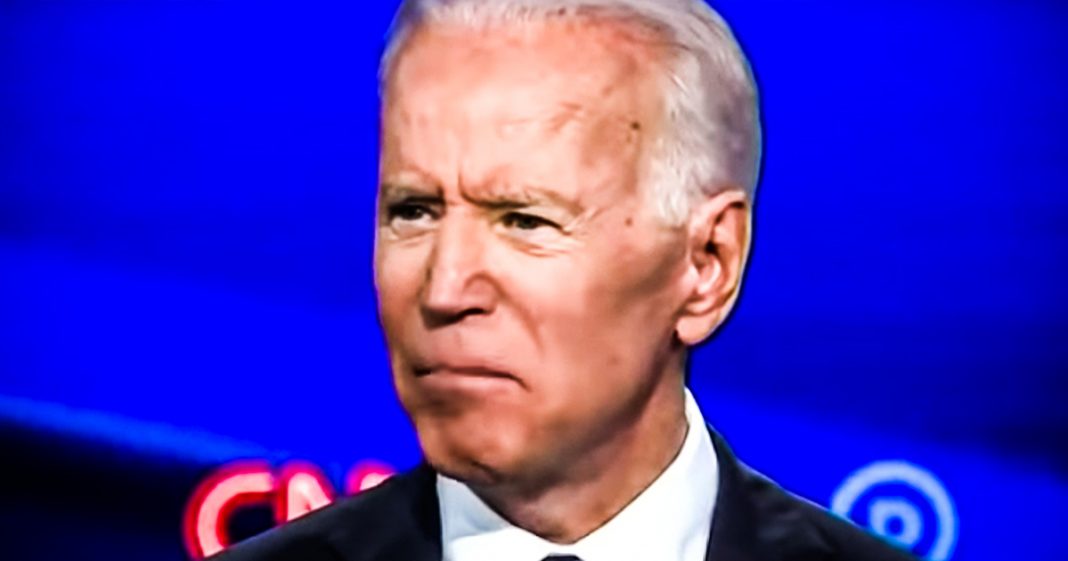 According to the latest round of polling, Joe Biden still holds a lead over all of the other Democratic candidates. This is disappointing, to say the least, as Biden has zero chance to beat Trump in 2020. The Republicans have already painted him as a corrupt, senile old man, and that image is sticking with Republicans. It doesn’t matter that it is hypocritical, they got there first. Ring of Fire’s Farron Cousins lays out more reasons why Biden is a horrible candidate.

*This transcript was generated by a third-party transcription software company, so please excuse any typos.
I came across a phenomenal article yesterday that I want to talk about and the title of it from The Week is Democrats are sleepwalking into a Biden disaster. And just on the headline, I immediately said, yes, yes they are. And I read through the article and it makes some really great points. But here’s the thing right now, Joe Biden, according to the latest round of polling is still the top. It’s a narrow lead depending on which poll you’re looking. The aggregates have them a couple of points a head though. Well, within margins of error, but Biden is still at the top of the ticket here. He’s still the leader. And I think right now a lot of us are wondering why. I mean look. I am friends with a lot of people who probably don’t share my progressive values. They’re Democrats, don’t get me wrong, but they’re a little more center Democrats. I haven’t met or talked to any of them that actually support Joe Biden. They understand that Joe Biden ain’t it, that Joe Biden will lose to Donald Trump. So I’m just wondering where the heck is this support coming from? You know, it’s not, it’s not, I’m telling you coming from people inside any kind of liberal form of media, it isn’t. It’s just people out there in America who say, well, I don’t know these other people. I know Joe Biden, so I guess it’s Joe Biden it is, and you’re going to sleep walk us as The Week points out into a disaster because Joe Biden is a disaster. You know the, the allegations of plagiarism from his first presidential campaigns, the Anita Hill thing that still haunts him to this day and should the crime bill that he voted for. But if you want to go a little more recent, how about him biting his wife’s finger during the speech? How about his crazy stories about corn pop and the kids liking to rub his hairy legs? That’s frigging weird folks, and it’s a weirdness that Republicans have already jumped on. Not to mention the fact that in the debates he couldn’t even remember his own campaign. You know, go to Joe three Oh three three Oh three one dot side. I don’t fricking know. He didn’t know his own website folks. He didn’t know the number to text. He confuses dates and times and when he served in office and what happened when he was serving in office and what happened since then, he doesn’t know those are red lights. Those are red lights flashing right in our face, right in the faces of the people who support Biden and they say, wow, somebody turn that light off. That’s obnoxious. No, pay attention to the warning light flashing in your face. Joe Biden is a human gaffe machine and we can’t afford that because he will not beat Donald Trump. And then you have the other problems. And these problems are a little bit more unfortunate for Biden because these are made up problems but not to Republicans, not to moderates. Those made up problems are the alleged corruption of Biden and his son Hunter. Now, as much as I don’t like Biden, I don’t buy into the fact that he did anything illegal or that Hunter did anything illegal, but Republicans do. And the Trump campaign and all other Republicans have already seized on this. They are painting Joe Biden as a senile corrupt, incompetent old white guy. And I know the irony there because Donald Trump is far more senile, far more corrupt, and far much of a whiter guy when he’s not orange, but they’ve already seized the narrative. So real or imagined the baggage still exists. That’s unfair. But it’s what they did to Hillary with the email thing. There was no scandal with the email thing. The FBI did get their hands on those emails, but they kept saying, no, they didn’t. Where are her emails? But her emails. So it was an imagined scandal, but it took her down just like the Ukraine thing will be with Biden. There’s no truth to it, but it’ll bring him down. Then of course you have his, his temper, right, and I love the fact that all of these establishment Democrats love to tell us how unhinged Bernie can become when somebody confronts him. Bull crap you want to see on hinged. But we showed you the video a couple of weeks ago of Joe Biden taunting the heavy set man who asked him a question about his son. That’s a temper. There’s plenty of other videos floating around of people asking him very simple questions about the environment, about healthcare, and his response is to fly off the frigging handle and say, well, I’m not your candidate. You should vote for somebody else. Wow. Wow. Real, real smart strategy there. Joe Biden, 2020 vote for somebody else because that’s what we’re dealing with now with. If somebody doesn’t agree with you or they’re asking where you stand on something, you can’t lash out and say, go support Bernie. You can say, listen, I understand your concern. I understand your question. And yeah, you know, Bernie has got his play, but let me tell you about my plan and let me tell you why my plan is better and let me earn your vote. I’m a natural born politician apparently, because that’s all it takes folks. But Biden can’t even do that. I think Biden, much like Hillary Clinton, believes he is deserved. He is owed the presidency. And if he continues to think that, and if the voters continue to think that on the democratic side, welcome to four more years of Donald Trump.