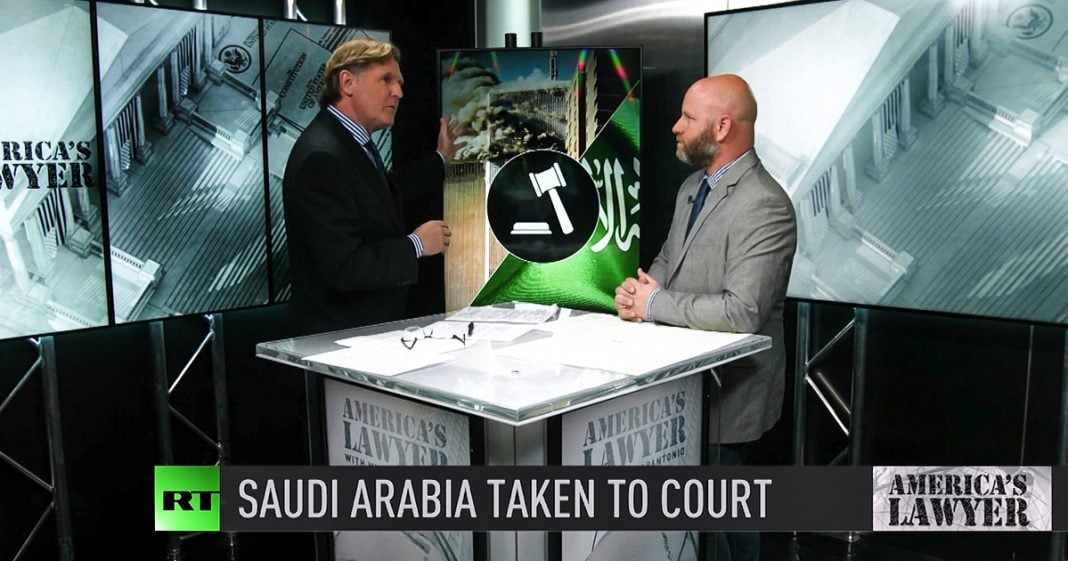 Via America’s Lawyer: Mike Papantonio and Trial Lawyer Magazine editor Farron Cousins put the spotlight back on Saudi Arabia, as over 25,000 9/11 victims and their families are filing suit against the Saudi government for its complicity in funding terrorist organizations.

Mike Papantonio:             The kingdom of Saudi Arabia is currently being sued by more than 25,000 victims of terror attacks including 9/11 over their role in funding these events. As these lawsuits progress, we’re learning even more about the disgusting actions of the Saudi government. I have Farron Cousins from trial lawyer magazine to talk about this. Farron, again, we’ve done this story more times than I can account. I wish somebody would listen. I wish other, other outlets may hopefully, mainstream media or what they call corporate media, this is very mainstream, but we’re not corporate. Why won’t corporate media talk about the elephant in the room? And that is the Saudi Prince and the Saudi family. They’re not our friends. Tell me, give me your take on it. Again, we talked about it last week, but there’s a lot more to this story.

Farron Cousins:                  Well, I think part of the reason it doesn’t get the coverage that it should is because as we’ve also discussed, you’ve got people like Boeing and all these other massive defense contractors that are huge advertisers on corporate media and they make billions of dollars per year from Saudi Arabia. So Saudi Arabia is the biggest purchaser of weapons from the United States. So, if the corporate media were to start covering these issues, it could hurt their advertisers. So it’s just like the typical thing. Their advertisers need the money from these people, so they’re not going to talk about all the horrible things that have been happening. And as you just said, the last couple months, we have seen huge developments in several different lawsuits against Saudi Arabia and Saudi Arabian banks for funding terrorism.

Mike Papantonio:             Okay. I love this one. Okay. First of all, the trial judge in this case was a goof. The trial, the trial judge, we had a case against Saudi Arabia where they, they, they showed overwhelming information that the Royal family and people in government were directly involved in planning the 9/11 attack and actually, actually giving money and giving a place to live for, for the people that were involved. So the lawyers involved in 9/11 discussion in the, in the litigation, they bring the lawsuit, they say, we got enough to show you. Here’s where it gets crazy. The judge at the trial level says, oh no, you didn’t really show that there was a clear intent. You didn’t show that the money that was used from a Saudi Arabian bank owned by the Royal family, that that bank intended for the money to be used for 9/11.

Actually, there was a lot to show that it intended, but they didn’t have to go there, you see, this is what bothers me about this case. All they had to say was that the bank was reckless, that they knew, should have known and ignored the fact that the money was going to be used for 9/11. That’s what happened. Second circuit in New York is a nightmare. The judges up there are, most of them come from Wall Street. They come from Wall Street establishment organizations. They sit on the second, they sit on the bench up there and they make these ruling, rulings all the time. Thank goodness, the second circuit said, you know what? I think there is enough intent. Take it from there.

Farron Cousins:                  Well, and the lawyers in the case specifically said, listen, we have laid it out. We have mapped it out. We have traced this money from the terrorist attack back to the Saudi Royal family. We have made those connections. We have connected the banks, we have tied the exact money into these attacks. These were brilliant lawyers in this case and they absolutely did the due diligence. They connected every possible dot and they said, there is no doubt in our minds based on the evidence we have that this was funded by both Saudi banks and the Saudi Royal family.

Mike Papantonio:             Okay, let’s take it a step further. I could go, there are so many lines connecting these dots to the Saudi Royal family. First of all, you’ve got, you’ve got, we know it’s very clear where the money went from the Saudi Royal family and and the Saudi Royal family friends that all, they’re all part of one part of the Saudi Arabian society. They’re the upper elite. We know we could follow the money to the charities that they donated to and, and, and so, so they cover, they tried to cover it by saying, well, we just gave money to the charities. They know for a fact that these are charities that were simply a front for, for terrorist money. So when I hear a judge make an absurd ruling at the trial level like this, I’m almost used to it coming out of New York, the, the Eastern district and Southern district in New York, but this to me was particularly ugly because they had all the information they needed.

Farron Cousins:                  Well, and right now we also have other evidence out there as part of these lawsuits that again, been going on for 18 years and only in the last few months we’ve seen these, you know, really big developments as things started to come out. They have traced this money from the Saudi Royal family to the Taliban. They’ve traced it to Al-Qaida. They have traced it to ISIS. Every major terrorist group on this planet. They’re finding out that, oh my God, Saudi Arabia, we’re able to trace money from them back to these groups back and forth all the time.

Mike Papantonio:             It’s worse than that. It’s worse than that. We know now through, through freedom of information. Now, understand, we’re handling these cases too. We’re handling these cases of banks washing money for terrorism in Iran and Afghan, I mean the, the trail in those cases is, it’s crystal clear. They even came up with a law called JASTA, you recall, which says, we need to make sure where we have a terrorist organization associated with a country that we treat that country in a certain way that’s different from other countries. We, it, it raises our ability to go after Iraq or Iran or wherever the, the terrorist organization may be. But they haven’t included Saudi Arabia here. And we know that 15 out of the 19 people that murdered 3000 Americans were all Saudi. And we know this now, don’t we? We now know that they’ve actually traced the money in the whole distribution process to a Saudi official who was connected to the Royal family.

Farron Cousins:                  Right. And, and part of the reason why we’re not willing as a country to go ahead and list Saudi Arabia as a state sponsor of terrorism, which they very clearly are based on the evidence, is again, because they purchase more weapons from the United States than anyone else on this planet. That, we’re talking hundreds of billions of dollars and we’re not about to give up that money. That is money that feeds our military industrial complex. They have tons of oil. We want to be friends with oil countries or take them over like they’re trying to do with Venezuela. So they’re not going to do it. They’re not going to touch Saudi Arabia. And we’ve seen it happen through Republican and Democrat administrations, no difference in policy towards this country. Even though we found out in the leaked Podesta emails, they’re sitting there talking about how horrible this is and they knew they were funding it.

Mike Papantonio:             We know the emails are available. You can go online and see them, but we know that he’ll re Clinton said, hey, we think they’re, you know, we think they’re part of a terrorist organization. We did nothing.

Mike Papantonio:             The media did nothing because of what you say. The arms industry is making so much money selling weapons to the damn Saudis and then the Saudis take that money that take the weapons and they give it to ISIS and they give it to to terrorist organizations. We know that, we have that information, but nevertheless we have these presidents walking around hand in hand with these thugs, these Royal family thugs that would blow us off the face of the map if they coul., And if we don’t, if we don’t handle this as a realism, we’re getting deeper and deeper into this problem.

Farron Cousins:                  That’s all we have left because the government won’t do anything. Bernie Sanders is actually the only person I have heard so far say we’ve got to rethink this relationship because these people are clearly not our friends.

Mike Papantonio:             Aren’t you disappointed we’re not hearing that from Joe Biden or Warren?