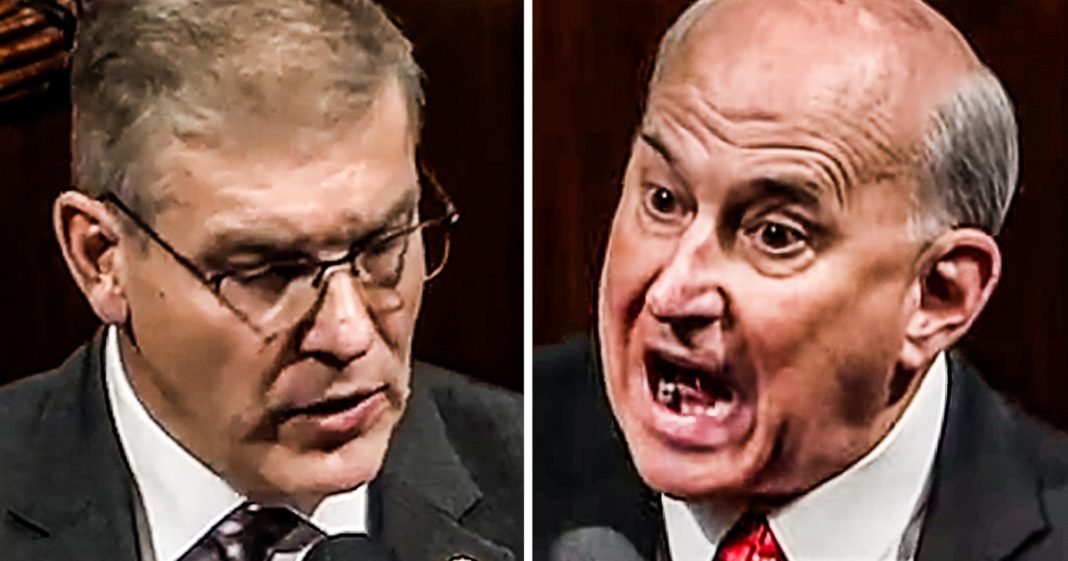 Donald Trump became the third president in history to be impeached by the House of Representatives on Wednesday, and needless to say Republicans aren’t taking it very well. From Louie Gohmert’s prediction of the apocalypse to Barry Loudermilk comparing impeachment to crucifixion, the House Republicans went all out in their defenses of the President. Ring of Fire’s Farron Cousins discusses this.

*This transcript was generated by a third-party transcription software company, so please excuse any typos.
So, I’m not sure if you’ve heard about this, but, uh, yesterday Donald Trump became the third president in the history of the United States to be impeached by the United States house of representatives. And as you can imagine, Republicans took it about as well as we expected. So prior to the actual vote where Donald Trump officially became impeached, we had Republicans all throughout the day taking their turn on the stage to show what complete morons they truly are. So let’s get started with some of the highlights from yesterday. And we’re going to start with Republican Congressman Barry Loudermilk. See, Loudermilk saw some parallels between the impeachment and another historical story that a lot of us are aware of. Here he is explaining what he thinks about impeachment [before you take this historic vote today, one week before Christmas, I want you to keep this in mind. When Jesus was falsely accused of treason, Pontus pilot gave Jesus the opportunity to face his accusers. During that sham trial, Pontus pilot afforded more rights to Jesus than the Democrats have afforded this president and this process I yield back.] That’s right, folks. Jesus went through the exact same thing after Jesus tried to extort the Ukraine for dirt on, I guess Jesus’s political enemies, uh, and Jesus sent his personal lawyer over there to uh cohort with two convicted criminal or excuse me, alleged criminals awaiting conviction. Uh, yeah, totally the same story there Loudermilk, but Loudermilk was not one of the dumbest people who spoke yesterday. He was close to the top, but certainly not at the top. We also had Republican Congressman Bill Johnson. Now Bill Johnson wanted everybody to take a moment and recognize the fact that this impeachment is undoing allegedly a presidential election. And how the hell can you do that, right? I mean, that’s what Bill Johnson wants us to think. You can’t impeach a president who was elected except that that’s literally the only kind of president you can impeach. You can’t impeach someone that wasn’t elected. Like we couldn’t draft articles of impeachment against Hillary Clinton because she didn’t win that, that, that’s kind of how that works. Mr. Johnson. So bill Johnson on the house floor requested a moment of silence for the 63 million people who voted for Donald Trump. A moment of silence. So he sat there after calling for this, bowed his head solomnly along with all of the other Republicans in the room for a 30 second moment of silence for everyone who voted for Trump, as if they all just died. Democrats unfortunately didn’t say a word during this 30 minutes of silence or 30 seconds of silence, and I wish they would have, I wish they would have erupted in laughter. I wish they would have, you know, thrown balled up paper at Mr. Johnson for being so incredibly stupid. But the true King of stupid emerged once again yesterday to reclaim his crown from Matt Gates. And the new King of stupid is the same as the old King of stupid Louie Gohmert. Louie Gohmert got a little heated, Louie Gohmert got a little worked up his Texas blood, started boiling folks and Louie Gohmert, Louie Gohmert predicted that this impeachment is going to bring about the apocalypse, but only luckily for just the United States. Here’s what mr Gohmert said. This country’s end is now insight and I hope I don’t live to see it. This is an outrage. Well, what tell you what mr Gohmert. I also hope that you don’t, but it’s also not the end of the country. You idiot. We have had presidents impeached before and we’re still here as a country. I mean, we had bill Clinton impeach what like 21, 22 years ago roughly. Uh, we survived after that. Not only that but Bill Clinton became even more popular after impeachment, so hey, maybe you got that to look forward to with your, with your boy Trump. Who knows. Now though, that’s just, you know, a small selection of some of the Republican craziness that took place on a Wednesday, but it’s certainly not going to be the end of it. We’re going to see a lot more of that in the Senate, assuming Nancy Pelosi even sends the articles of impeachment over there, because as it stands right now, she is saying she’s not sure she’s going to do that because she knows they’re not going to give it a fair trial. Mitch McConnell has actually even hinted at the fact, in addition to saying we’re working with the white house, you can’t call witnesses. He actually suggested yesterday that they may just take the articles, bring it for an immediate vote, and get rid of it. So I don’t blame Pelosi for saying, yeah, you can’t have these yet. I have to be able to trust you. The problem is Pelosi, you’re never going to be able to trust him. He’s never going to do what we need him or want him to do here. So maybe, maybe it’s best to just tuck those articles in your back pocket until possibly we get a new majority leader in the Senate.