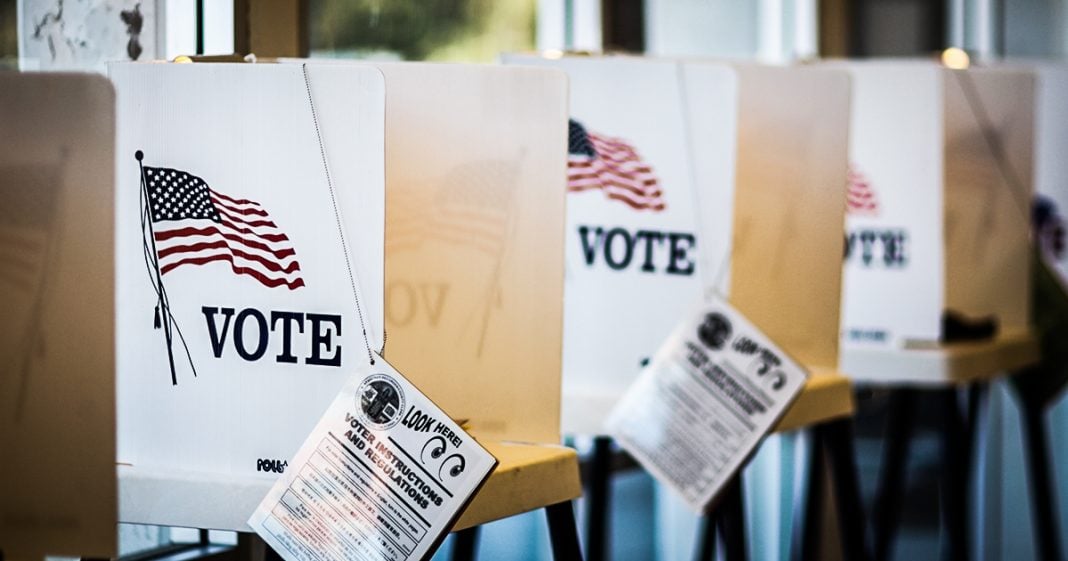 For all the talk about “Russian interference” in recent years, not nearly as much attention has been paid to Republican interference in our elections. From faulty voting machines to voter purges to gerrymandering, Republicans across the country are cheating in order to retain their power. This country would look a lot different today without Republican interference, and it could become a much worse place in 2020 if they aren’t stopped. Ring of Fire’s Farron Cousins discusses this.

*This transcript was generated by a third-party transcription software company, so please excuse any typos.
You know, for the last, I guess it’s been what now three years, we have heard nonstop talk about Russian election interference. And let’s be honest, Russian election interference is a thing that we need to be worried about and we need to do something about. But so is, you know, Saudi Arabia in election interference, so is Chinese election interference. But the biggest form of election interference that we need to be worried about here in the United States is not coming from overseas. It’s coming from right here in the United States from the Republican party for at least the last 20 years. We have seen a coordinated effort from the Republican party here in the United States to disenfranchise as many voters as possible to erect barriers to voting, to prevent people from being able to cast a ballot. And they’re doing it because they know they can’t win elections anymore unless they cheat. In the last week and a half, we have seen stories emerge about what, 230 plus thousand people getting kicked off the Wisconsin voting rolls more than enough to swing that election one way or the other. Stories about Georgia purging 300,000 voters from the voting roles more than enough to swing that election in 2020 the state of Florida is working to disenfranchise 1.4 million former felons. A 10th of that is more than enough to swing the 2020 presidential election. These voter purges are going to become the norm. States controlled by Republicans as we inch closer to 2020 we’re going to see this happen more and more frequently, and here’s the thing, we have been watching this happen in slow motion. We hear at Ring of Fire been warning people about this from day one. People like Brad Friedman been warning you about it for even longer than that. This is what they do. They did it in the state of Florida in 2000 and that’s what caused George W. Bush to become president of the United States. They purged thousands of people from the voting rolls in the state of Florida in the year 2000 because their names happened to be the same name as somebody who was in prison. They didn’t bother to check and see if it was the same person. They just said, Oh Joe Smith’s going to vote. But Joe Smith is in prison over here. I guess it’s probably the same person because there’s no chance anybody ever could have the same name. So Joe Smith can’t vote. So Joe Smith goes in there to vote and they say, Nope, you’re not on the rolls. He doesn’t get the vote. Simple as that. Similar things played out in Ohio in 2004 which also gave George W. Bush reelection. We sold voting machine malfunctions all across this country. For 20 years now. And we’ve just done nothing. We have literally as a country done nothing. Now. Yes, there have been attempts to do something about it. But so far none of them have been successful. So we still have literally done nothing. And that’s only part of the story. It’s not just the voter purges its not just the faulty volt- voting machines that can be hacked by an 11 year old child. It’s the gerrymandering as well. And that to me is, I don’t want to say it’s the most disgusting, but it’s definitely tied for first because here’s the thing. Let me show you a district right here. Here’s the district. This district is Dan Crenshaw’s district. You know the hardcore Trump supporter who got Saturday night live to apologize for him and then turned into one of the worst people to ever live. This is his district. That ladies and gentlemen is a gerrymander. There is no reason whatsoever that district should look like that. A big square on top and then this weird leg look and claw type thing coming down and reaching through and grabbing these other areas. That’s crap and it’s happened in Pennsylvania. It’s happened in Ohio, it’s happened in Texas. It happens in Florida. It happens all over the country and unfortunately as long as Republicans control these States, there’s very little the Democrats can do about it. We have had several successful court cases where courts have told the Carolinas, Hey, you’re gerrymandered to Hell’n back. You have to redraw this. Still waiting on those redrawn maps to come out by the way, they’re supposed to be. They’ve gone way past their due date and they’re just not there yet. So that’s where we’re at today. So yeah, we can talk about Russian election interference to other foreign election interference, but if you want to talk about the party, the group, the organization that is interfered with more us elections than anyone else in the world, then you have to look squarely at the Republican party and just see what they have done to us in just the last 20 years.