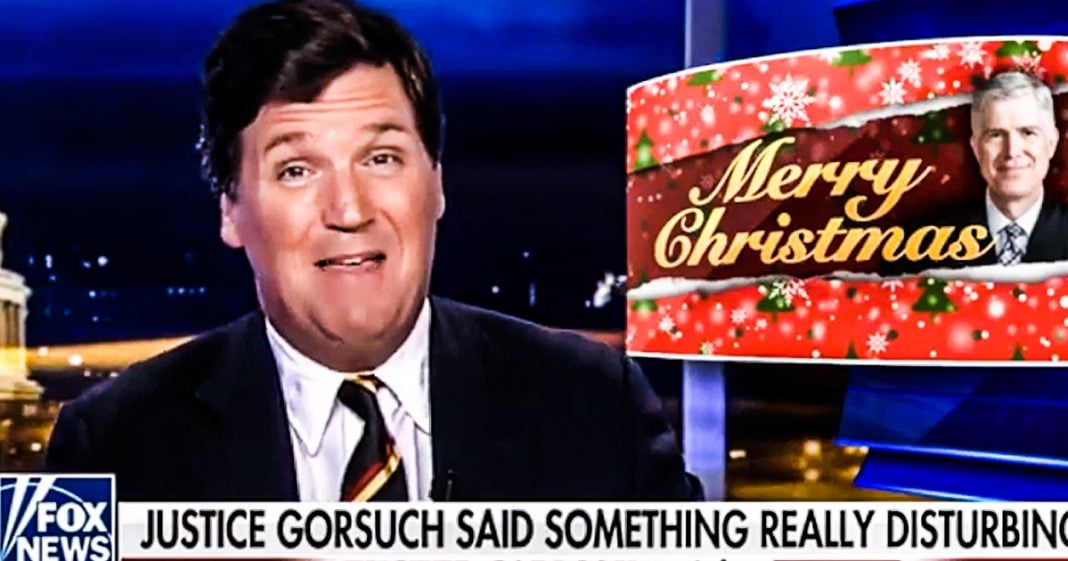 Supreme Court justice Neil Gorsuch appeared on Fox News on Tuesday where he wished the host a “Merry Christmas.” Some folks on Twitter recognized this as obvious pandering to the Right, but Tucker Carlson had other thoughts on the subject. In an unhinged tirade, Carlson attempted to call out a few people from Twitter who rightfully criticized Gorsuch, but there were so few who cared that Fox actually had to fabricate info about these people. Ring of Fire’s Farron Cousins explains what happened.

*This transcript was generated by a third-party transcription software company, so please excuse any typos.
Supreme court justice Neil Gorsuch appeared on Fox news yesterday and immediately everybody on the left was wondering why in the heck is a conservative Supreme court justice appearing on a cable news program? What? What’s, what’s with this? This is unusual. This is not something that typically happens, but at the end of his segment, Gorsuch told the host Merry Christmas and the way he said it, you understand that he was just pandering to all the Republicans who think that the words Merry Christmas have been outlawed for years. Couple people on Twitter pointed this out and then later in the day on Fox, Tucker Carlson decided to call out those Twitter people in the most insane way possible. Here it is. [Merry Christmas. Merry Christmas. I love that you say that. Whoa. Did you hear that? Merry Christmas. According to blue check Mark Twitter Gorsuch may as well have said heil Hitler, Amy Vanderpool, apparently real person tweeted this Supreme court justice Neil Gorsuch just appeared on Fox and friends this morning, making a point to parrot the Merry Christmas talking point of the GOP. This is real. Give me money if he’s willing to go on Fox and throw a shout out to Republican narratives. What else is he willing to do? Comedian Sean Penn tweeted this on Fox news. Neil Gorsuch made a point to say Merry Christmas, just like he gained the freedom to say it under Trump. This guy is such a worst case scenario of a stolen Supreme court seat.] All right. First and foremost, I have to point out the fact that that was the fakest and creepiest laugh I may have ever heard in my entire life. That was weird, Tucker, that that that was very unusual and creepy and I’m going to have trouble sleeping for the next few days as I continue to replay that laugh in my head. Unfortunately I can’t seem to get it out. But you talk about the fact that Amy Vanderpool who you say is apparently a real person and you show her tweet up there, it’s just got the little blue check mark on it cause she’s a verified Twitter account except as uh Ms Vanderpool pointed out on Twitter and you can go to her Twitter handle and see. She’s actually not verified. She’s not, you, your producers, your editors, whoever it was added that blue check Mark there to make it seem like Amy Vanderpool was somebody who she wasn’t. Then you have the other guy who does have a blue check mark and then that’s, that’s it. That’s the end of your laugh riot. Two people, one of whom was verified, so your producers dug through Twitter trying to find some kind of high profile person that people might recognize. Trying to find somebody saying something so unhinged about Gorsuch saying Merry Christmas, and those two were the best you came up with and you even had to lie about one. That’s pathetic. Your producers ought to be fired for that, by the way, but here’s the thing. These people weren’t even mad that he said, Merry Christmas. Literally, no one cares in this country. If you say Merry Christmas and I’m sick and tired of Moronica Republicans acting like people actually get offended by it. That’s not a thing that happens. It’s simply not. It is a made up talking point by Republicans so they can perpetuate their war on Christmas. That never existed on the left folks, it never existed. What they had a problem with these two people on Twitter that Tucker Carlson devoted time to was the fact that Gorsuch was obviously pandering. That’s why he did it. He was acting like he hadn’t been allowed to say it during the Obama years. Obama said, Merry Christmas. He tweets out. Merry Christmas. Always has. Always will. George W. Bush did. Bill, Bill Clinton did when they gave out, went out and gave speeches and sent their Christmas cards. They told people, Merry Christmas. They told people happy Hanukkah. So does Donald Trump people. The war on Christmas is insane, and it’s being waged by insane people working for the right wing media. But as it stands right now, after that little clip right there, you’d be hard pressed to find anyone on the right, more insane than Tucker Carlson.