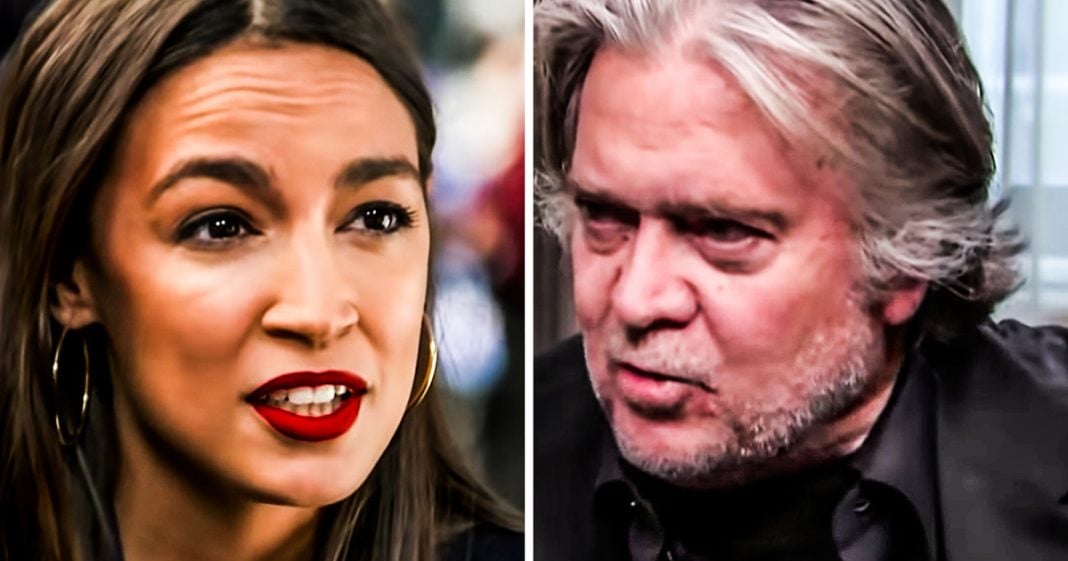 In an interview with The Guardian this week, former Trump strategist Steve Bannon claimed that his Party needs to find working class heroes like Alexandria Ocasio-Cortez, an ironic claim considering how much Republicans attack her because she worked a normal job before coming to Congress. But Bannon’s interview proves that those attacks are out of fear, not out of contempt, and he wants the Republicans to have strong leaders like AOC. Ring of Fire’s Farron Cousins discusses this.

*This transcript was generated by a third-party transcription software company, so please excuse any typos.
You know, if you listen to people on the right, you can pretty much guarantee that eventually they’re going to say something negative about representative Alexandria Ocasio-Cortez. They all seem to hate her and they all love to mock the fact that before she became a member of Congress, she worked as a bartender. Well, guess what? There’s one person who’s not laughing. There’s one person who’s not mocking her. There is one person on the right, on the extreme, far alt right who actually admires her and understands her importance and that person, oddly enough, is Steve Bannon. In an interview earlier this week with the guardian, Steve Bannon admitted that the right needs to find more AOC’s for them, working class people he said, because as he says, quote, we’ve turned the Republican party into a working class party. Man, you actually haven’t, but okay. Now, interestingly, we don’t have any elected representatives who believe that, but that’s a legacy issue. We’ll get over that. We’ve got to find our AOC’s now I’m not exactly sure what all of that meant other than we’ve got to find our AOC, but yeah, the Republican party doesn’t believe you’re working class party because you’re obviously not a working class party. You’re the party of millionaires and billionaires and big corporations that that’s what the Republican party has been ever since the day I was born. I know at some points in history it wasn’t that, but it is now and has been for my entire life. He goes on, he said they did an amazing job in 2018 I keep saying I admire AOC. I think her ideologies all EFT up, but I want her, I want to recruit bartenders. I don’t want to recruit any more lawyers. I want bartenders and what he means by that aside from the fact that he obviously is also looking for a drink at the moment, is that he wants working class people. He wants people in Congress who understand what it’s like to not be able to pay their bills, who understand what it’s like to have to work 12, 13 hour shifts and then wake up the next morning and do it all over again. People who can relate to average everyday people, but unfortunately, man, you’re not going to find too many of that on the right. It’s just not there. Yes, there’s plenty of working class people who work their butts off every day who identify with the Republican party, but most of them wouldn’t be able to immediately transition going to Congress and prove themselves to be one of the smartest members there, which is exactly what AOC has done. I am not a fan of watching congressional hearings. They are boring. They are drawn out, blah, blah, blah. I cannot get enough of watching AOC, AOC speak on the house floor she is out there throwing out numbers, throwing out these specifics and logistics and calling out the people who need to be called out. Things that we haven’t truly seen on the house floor in years. And here, this freshman representative who is Steve Bannon points out just used to be a bartender, is absolutely killing it in Congress. So I understand why Steve Bannon says they want some AOC cause it’s not just to say we’ve got working class people, not just lawyers and you know, rich folk, but because they want to have somebody smart and that’s what they’re not going to be able to find. You are not going to be able to find anyone on the right who’s going to be able to go to Congress and perform like AOC has. She has been phenomenal. She has been the smartest, she has been the hardest hitting and she refuses to back down in spite of the constant negativity and the attacks coming at her and her staff from the Republicans. She is a fighter, she is intelligent, and she is a true representative of the working class here in America. And the right wing will never be able to replicate that or find anyone on their side who comes close to being able to do that.