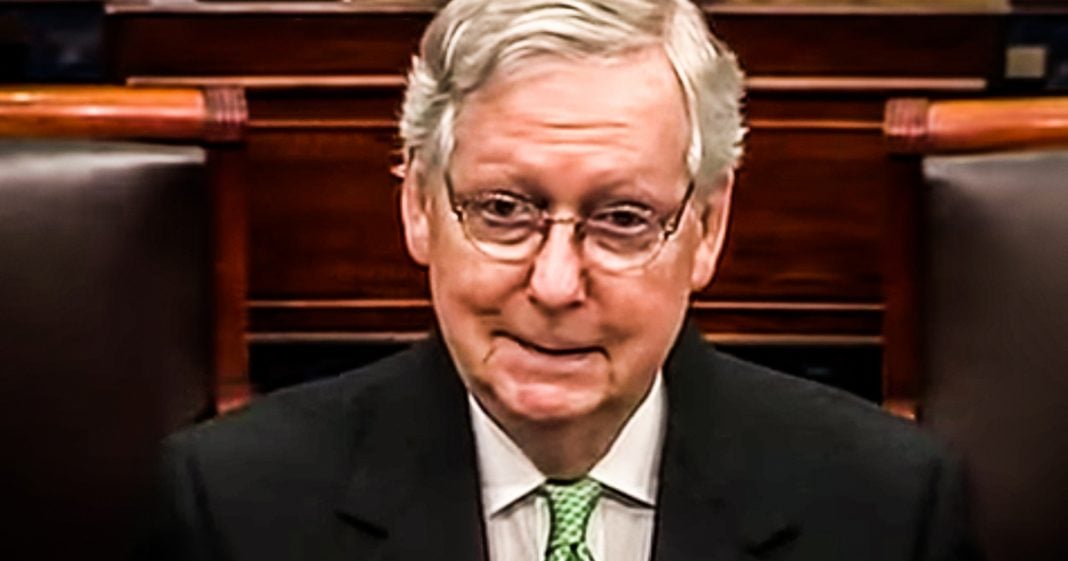 Senate Majority Leader Mitch McConnell is trying really hard to be a good loyalist to Donald Trump, and on Tuesday he announced that there will be NO new witnesses called to testify during the Senate’s impeachment trial. At this point, the trial is absolutely just for show, and it won’t even be a good show. The only question that will remain to be answered is how will the public respond? Ring of Fire’s Farron Cousins discusses this.

*This transcript was generated by a third-party transcription software company, so please excuse any typos.
Mitch McConnell is once again making it clear that the impeachment trial that will take place in the Senate early next year is going to be a complete and total sham. Yesterday, McConnell announced that he would not entertain the idea from Chuck Schumer to allow new witnesses to come in and testify during the trial. Specifically people like Donald Trump’s acting chief of staff, Mick Mulvaney and former a national security advisor, John Bolton. McConnell doesn’t want to hear from these people. He doesn’t think it’s necessary. He said, quote, I think we’ve heard enough after we’ve heard the arguments, we ought to vote and move on. That’s what McConnell wants to. He doesn’t want to hear from the people who were involved. He doesn’t want to hear from the former members of this administration who were critical of this and understood why it was happening. Why? Because he knows that this is only going to prove the Donald Trump is guilty. So again, we knew from the start, even before he announced it was going to be a sham, that it was going to be a sham. He’s just going a little further now and just letting us know the details of how horrible this trials really going to be and that’s the point. They want it to be horrible. They want it to be a clown show. They wanted to get it done within a week so they can tell the public afterwards that, look, we held a trial. He was found not guilty. Nothing we can do. Folks game’s over. Question is, how does the public respond? Have they been paying attention? Do they understand that this trial that is about to happen in the Senate is completely rigged and staged by Mitch McConnell and the white house? If they understand that they’re not going to buy the results of the impeachment trial, they will believe that Trump is guilty and they will hold onto that feeling as they head into the polls later in 2020, if they fall for Mitch McConnell’s lies and the Republican talking points about being acquitted, then yeah, Democrats kind of screwed on that. Not really much they can do. Sure. We can all go out there and explain to them how the trial was rigged, how they didn’t do what they were supposed to do. They didn’t allow the witnesses. Mitch McConnell admitted he’s working with the white house on it, but you’re not going to change their minds if, if they don’t already understand this. They’re not going to understand it later, and the problem is you will have conservative media led by Fox News that will be trumpeting the fact that Donald Trump was acquitted. They will not mention the fact that this trial was rigged, that it was a complete fraud. They’ll just say he was acquitted. Democrats were wrong. They wasted three years investigating. Look how silly they look now as it stands right now, we don’t know which way that’s going to end. We know how the impeachment trial is going to end. The only question is how is the public going to respond? Are they actually paying attention or are they just going to let Republicans lie to them all the way through 2020 going to have to wait and see on that one.