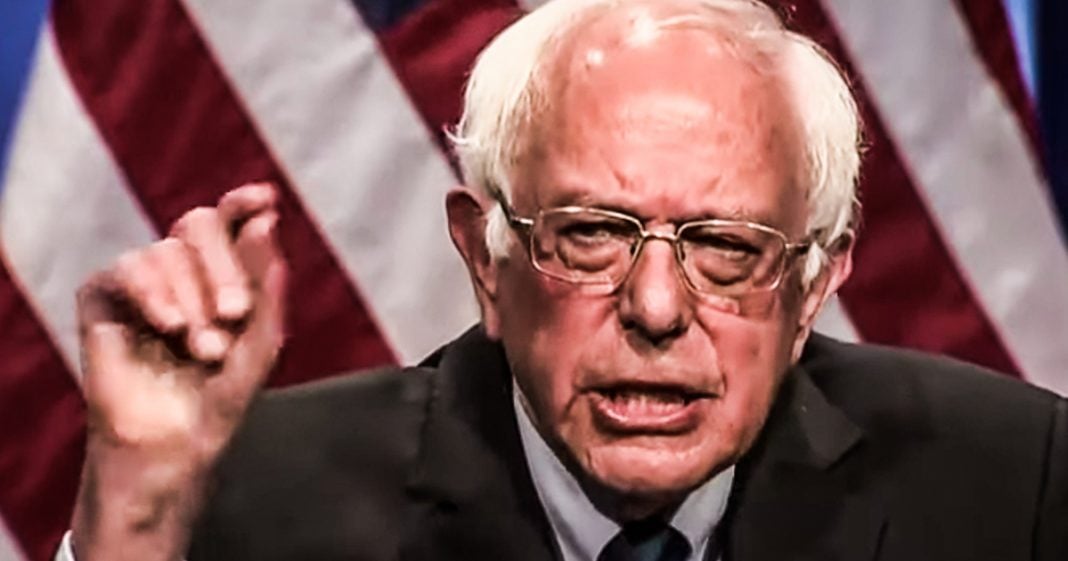 Bernie Sanders wrote an op-ed that appeared in The Washington Post on Tuesday where he laid into both Democrats and Republicans for passing Donald Trump’s $738 billion military budget, which includes money for the border wall and Space Force. Sanders called out these politicians for being the ones who claim that we can’t do anything to actually American citizens with programs like Medicare For All, yet they always find money to feed the military industrial complex. Ring of Fire’s Farron Cousins discusses this.

*This transcript was generated by a third-party transcription software company, so please excuse any typos.
So last week, 188 Democrats in the house of representatives voted along with Republicans on the 2020 national defense authorization act, which is going to give the Pentagon $738 billion democratic. Senator Bernie Sanders is not happy about this, and on Tuesday, the Washington post published an op ed written by Sanders where he attacked not just the Republicans, but also the 188 Democrats who voted to pass this military budget, which as Sanders points out is actually more than what the Pentagon had even requested. Here’s a couple lines. You know, Bernie mentions the fact that he’s always asked for his Medicare for all or debt-free college agreement. How are you going to pay for it? How are you going to pay for it? They always ask Progressive’s, nobody’s asking how we’re going to pay for $738 billion per year for this military budget. But Sanders goes on. He says when it comes to giving the Pentagon $738 billion even more money than it requested, there is a deafening silence within Congress and the ruling elites about what our nation can and can’t afford. Congress will just authorize inappropriate all of this money without one penny in offsets no questions asked. I find it curious that few of the deficit Hawks are asking if it’s fiscally prudent to be spending more on defense than the next 10 countries combined more than half of our nation’s discretionary budget. And there is little discussion taking place as to why the Pentagon riddled with fraud, cost overruns, and corporate price fixing is the only major agency of government that has not successfully undergone an independent audit. Bernie came with his receipts, right? He knew exactly what was going on with the Pentagon. He knows about the waste, the fraud, the abuse. He knows they’re not being audited. He knows for some reason we’re giving them more money than they’re even wanting. And nobody bats an eye, right? I mean, look, in a week from now, this story is going to be ancient history. Everybody’s gonna forget that it happened. People will bring it up every now and then that, Oh yeah, yeah, 738 billion. That’s awful. We shouldn’t give them that much and then this time next year it’ll be another one and another one and another one and another one until we get somebody in office like Bernie Sanders who understands that, you know what, we could spend 300 billion a year less than half of what we’re spending now still have the strongest, most well-funded military in the planet and have enough money left over to give everybody healthcare. Give everybody debt free college and go ahead and start investing in that green new deal. We can do all of that. We can be all of these things. We’re making the choice not to and that’s what Bernie is trying to point out here. We’re making the choice. We are saying that bombs and bullets and jets and tanks are more important than the tens of thousands of American citizens who are dying every year because they can’t afford healthcare coverage or even if they have health care coverage, they still can’t afford their medications. This is wrong. You know, Bernie Sanders and Rocana in the house with him who called out his fellow house members. This is crazy right now. We can’t spend this money on the military. We shouldn’t spend this money on the military and we don’t need to spend this amount of money on the military every single year. The only reason this budget exists in the form that it does have $738 billion is so that we can give more money to defense contractors. Okay? That’s the part people need to understand. This is only feeding the military industrial complex. This is not going out there and giving troops raises. This is not going out there and making sure they have better housing on bases or cleaning up the, uh, toxic chemicals that are polluting military bases all over the country. No, no. This is to buy weapons from people who are going to make billions of dollars off of this. That’s what this is about. Oh, and by the way, it also includes a couple billion for Donald Trump’s border wall, and of course the funding that the president wants to build, his stupid space force and 188 Democrats in the house of representatives saw all this in the legislation and decided, you know what? I’m going to go ahead and approve this. Why? Probably because they want to get their hands on a little bit of that defense contractor cash for their next campaign.