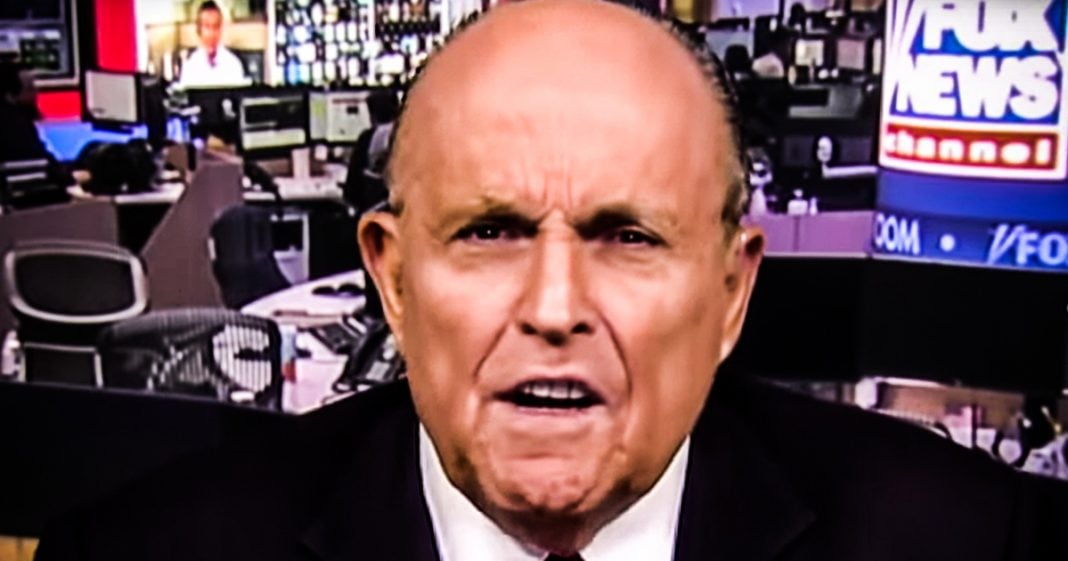 In an interview with The New Yorker, Rudy Giuliani admitted that he was active in getting former Ukraine diplomat Marie Yovanovitch fired so that he could have easier access to Ukrainian officials to dig up dirt on Joe Biden. Trump has repeatedly claimed that Yovanovitch was fired because she just wasn’t good, but now we know the truth straight from the President’s lawyer. Ring of Fire’s Farron Cousins discusses this.

*This transcript was generated by a third-party transcription software company, so please excuse any typos.
In case I haven’t said it recently. Let me go ahead and reiterate one very simple truth. Rudy Giuliani is absolutely the worst attorney in the entire United States. In a recent interview with the new Yorker that was just published earlier this week, Rudy Giuliani admitted, almost bragged about the fact that he was the guy responsible for getting Marie Yovanovitch, the former ambassador to the Ukraine from the US fired. Now, why is that a big deal? Because during her testimony recently, Yovanovitch claimed that she was the victim of a concerted effort from the Trump administration to force her out of her job. Okay, well, she even admitted in that testimony that sure Donald Trump has the right to fire her, but all the claims of her being bad at her job are being corrupt in some way. Those are all pure garbage because Giuliani in this new Yorker interview didn’t just stop after admitting that he got her fired. He had this to say, I believed that I needed Yovanovitch out of the way. She was going to make the investigations difficult for everybody. Those investigations, by the way were the ones that Rudy Giuliani was trying to set up to dig up dirt or more accurately fabricate dirt on Joe and Hunter Biden, so he admitted the president’s personal lawyer admitted in this interview. I got her fired because I wanted these investigations to move forward. That’s pretty clear cut and that destroys a major defense. The Donald Trump was going to lay out as part of his impeachment and that is that this wasn’t about Biden, this was about rooting out corruption. Well no, it was about your little handpicked lawyer who’s possibly illegally working for you. By the way, you know, few people have addressed that fact. Let’s talk about that for a moment. Rudy Giuliani is allegedly working for free for Donald Trump, but he is providing a service that is of benefit to the Trump campaign that should be considered an in kind campaign contribution, which would far exceed the legal limits and therefore put both Donald Trump had Rudy Giuliani and further legal jeopardy, but Hey, that’s a story for a different day. Let’s talk about Giuliani, who again just got back from the Ukraine recently and now he’s telling the new Yorker, yeah, I got this woman fired. And then he recruited former Hill columnists, John Solomon, and then Giuliani said in the interview, I said, John, let’s make this as prominent as possible. I’ll go on TV. You go on TV, you do columns, and the columns, the TV hits were all to spread propaganda about Marie Yovanovitch. This a concerted effort as Yovanovitch had said to smear her, to discredit her. So now she’s got the basis for a pretty good slander lawsuit because Giuliani like a moron has admitted that he did this now, like I don’t understand even working for free for Donald Trump, he’s still being overpaid because he’s so grossly incompetent. And furthermore, we know that Giuliani again just got back from the Ukraine where he was working with people to dig up dirt on Joe Biden to give it to Donald Trump. How is that any different and why aren’t Republicans in an uproar? Because they were, when the Democrats took over payments for Christopher Steele for his dossier, right? I mean, Republicans were calling for Democrats to be jailed because they were giving money to somebody to dig up dirt on Donald Trump. Well, now we have Donald Trump who’s using his personal lawyer to dig up dirt on his political opponent. Why are these two things different? Right? Technically, none of them would be illegal with the exception of the fact that there was the quid pro quo. There was the extortion and Rudy Giuliani has absolutely no business going over to the Ukraine as he is not a member of the Trump administration or the Trump campaign. None of this makes any sense. And Rudy Giuliani is only making things so much worse for Donald Trump, the guy who he is eventually going to have to try to defend, and I cannot tell you how excited I am to watch that happen.