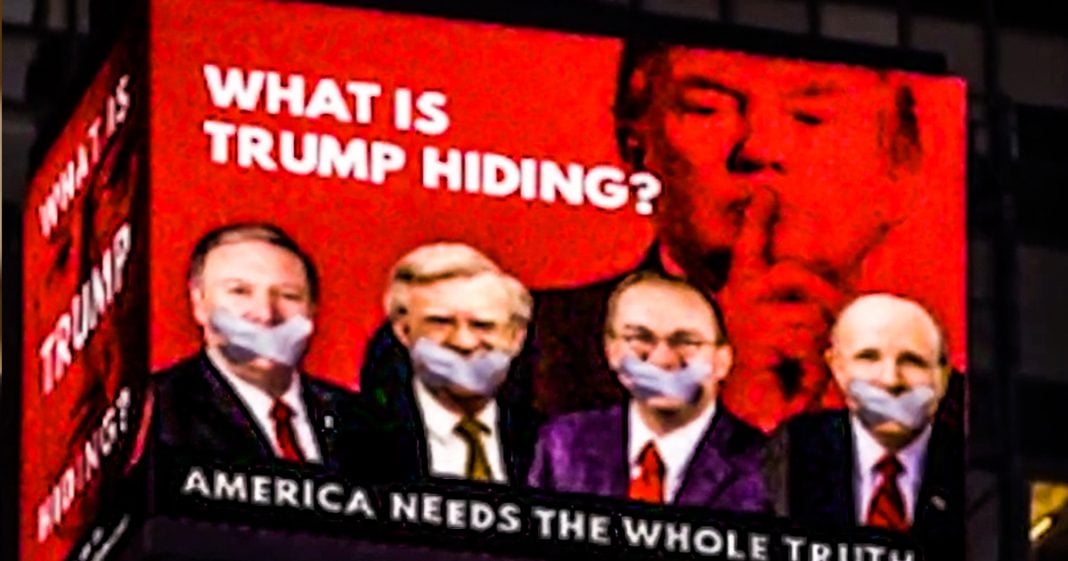 The conservative group Republicans for the Rule of Law has taken out a massive billboard in the middle of Times Square in New York with a very simple message for Americans: What Is Trump Hiding? That’s a great question to ask, because the President has done everything possible to hide information from investigators in every case he’s being investigated for. Ring of Fire’s Farron Cousins discusses this.

*This transcript was generated by a third-party transcription software company, so please excuse any typos.
The anti-Trump conservative group. Republicans for the rule of law has bought a massive billboard right in the middle of New York city’s times square to run an ad that’s fairly simple. It says, what is Trump hiding? America needs the whole truth. It’s got a picture of Trump up there. It’s got a picture of Palmpeo. It’s got a picture of Mulveiny and a couple other folks. But what is Trump hiding? America needs the whole truth. Now Republicans for the rule of law is not a group that we should be heralding as some kind of great anti Trump organization and the group was founded by Bill Crystal. Okay? These are people who pushed us into an unwinnable war, not exactly the kind of allies we should be embracing, but I will give him a few little props for putting this out up in times square for millions to see and also running this ad on television in Republican districts to call out these pro Trump Republicans. That’s actually pretty gutsy. So I’m glad you guys are doing that, but I’m not going to embrace you as an ally just yet because the only thing we agree on in life is that Trump sucks. Sorry. But that’s not enough to build a friendship here. But nonetheless, they’re right with this ad. What is Trump hiding now? Specifically, they’re referring to the Ukraine, uh, impeachment issue. You know, Donald Trump is not letting his people testify, even though they’ve been subpoenaed. They are withholding documents. The state department just got popped for that last week by a federal judge said, you got to turn over everything. Why are you not? But I think it should go even further than that because it’s not just the Ukraine. Where’s the tax returns, buddy? Why are you fighting tooth and nail in multiple different States to not have your tax returns released? You’re hiding something. Why are you fighting to not have your other financial records released? What are you hiding? Why won’t you turn over the records from your Trump organization is part of these emoluments clause lawsuits. What are you hiding? And I think we all know the answer to that criminal activity. Now I’m not saying that, Oh, he’s laundering money through the Russians as some, uh, on the center left would like to think no. What’s happening? Is it Donald Trump, according to Michael Cohen himself committed bank fraud, and that’s why Donald Trump won’t turn over his business records or his tax returns. He’s getting money from his organization, from his businesses, from foreign countries coming and staying at his hotels. That’s why he won’t release the financials from his businesses and these emoluments clause lawsuits. That’s criminal. It’s a violation of the constitution. And if that were able to be proved beyond a doubt, he would either be forced to divest completely from his businesses, never, never take another penny in profit or he’d have to resign. Simple as that. What is Trump hiding? Criminal activity, no matter which case you look at, whether it is the Ukraine thing, whether it’s the emoluments clause thing, whether it’s the tax returns or his other financial records, his bank records and all of that. There is plenty of criminal activity in there, at least according to the people who’ve actually seen them, like Michael Cohen. That is what Trump is hiding and that is why nothing short of a Supreme court order is going to force him to release those documents.