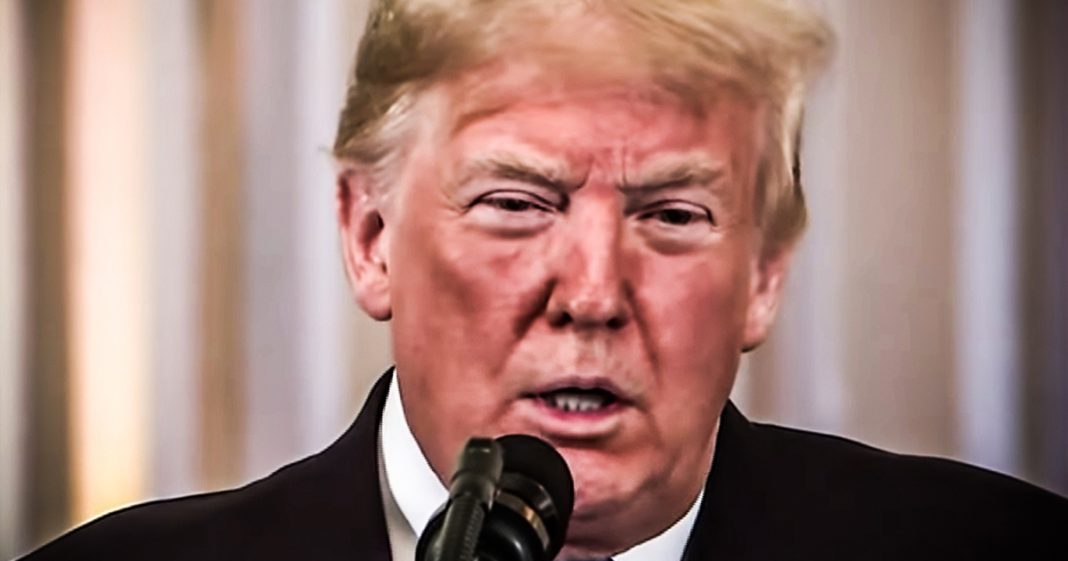 The House Judiciary Committee released their final report on the impeachment of Donald Trump on Monday, and the report contains multiple different instances of the President committing felonies. While the report is emphatic that these crimes warrant impeachment, it is still a little unnerving that the process ended so quickly while evidence is still emerging, and with so many other crimes left untouched. Ring of Fire’s Farron Cousins discusses this.

*This transcript was generated by a third-party transcription software company, so please excuse any typos.
So yesterday, Democrats on the house judiciary committee released their 169 page indictment really of Donald Trump. And in that indictment they list multiple felonies that they believe they have uncovered that Donald Trump committed the two biggest ones, abuse of power and wire fraud and wire fraud is not necessarily when we saw coming, but they’re talking about the wire fraud in the withholding of the aid to Ukraine. That’s how they’ve decided to frame that issue. Is that illegally withholding? That is a form of wire fraud. It’s pretty decent. I mean, that’s a pretty good charge. The abuse of power also encompasses the obstruction of Congress by refusing to let his, uh, people, even though they were subpoenaed, come and testify to the committees. The abuse of power also encompasses the extortion with Ukraine, you get your money when we get the dirt on Biden. So overall, that’s what the Democrats on the judiciary committee have to offer. Very similar to what the intelligence committee already released. Tomorrow it is looking like we may have a full house vote on these articles of impeachment, meaning by dinner time on Wednesday, Donald Trump may be officially impeached and I again have mixed emotions about this. I hate the man. He’s awful. His policies are absolutely destroying this country and he’s committing massive human rights violations right here on American soil as well as over in the middle East and other foreign countries. But I also want him impeached. I want him removed. I don’t ever want to see or hear from him ever again. But the Democrats should have slowed down a little bit on this. Just yesterday, I mean after they had released their report, we get the report from the new Yorker saying that Rudy Giuliani admits that he was the one who got Marie Yovanovitch fired because he didn’t want her to know about the investigations he was trying to launch into Joe Biden. There is still more information about this story coming out every other day, right? I mean these are things that could easily bolster the case for impeachment. Where’s Lev Parness? Why didn’t you have him come testify? This man knows everything and is ready to tell everything. That is the kind of evidence that you need, but you didn’t do it. You rushed it. You know you want to get home for the holiday break and new year’s Eve and new year’s day and all that fun stuff and the college bowl games in the, I don’t know what else. But good God, you should have taken your time. You should have let it sit. The vote shouldn’t be held this week. The votes shouldn’t be hold next week. The vote shouldn’t be held next month or the month after. There is still far too much information that needs to be uncovered. I don’t care if you have to vote on articles of impeachment right after the nomination ceremony at the end of next summer. I don’t care if you do it two weeks before the presidential election. Take your time, get this right cause you got one shot and after you shoot it, that’s it. Nothing else. You can’t do this again. You don’t get a Mulligan, you can’t start over from scratch. You know what those Republicans in the Senate are planning to do to this. They’re going to kill it and they’re going to kill it quick. But if the evidence were overwhelming enough, it would be a very hard sell for those Republican senators up for reelection to go back to their districts, their States and say, yeah, I voted against it. Even though all of the evidence was pretty, pretty damning of the president. I still, you know, I wanted to protect him. That’s not going to sit well with voters. But if you just go in there with a couple of testimonies from people that Republicans have been trashing for a couple of months, that’s not good enough to sell it to the voters. And isn’t that the point of all this? Isn’t that what you were trying to do here? You should’ve included the emoluments clause violations. You should’ve included the bank fraud that Michael Cohen mentioned in his testimony. You could have and should have done all of that, but you didn’t. Instead, you focus solely on the crime of trying to take down Joe Biden and I gotta tell ya, I like the idea of impeachment. I’m glad it is going to pass the house. I just wish the Democrats would have done it correctly.