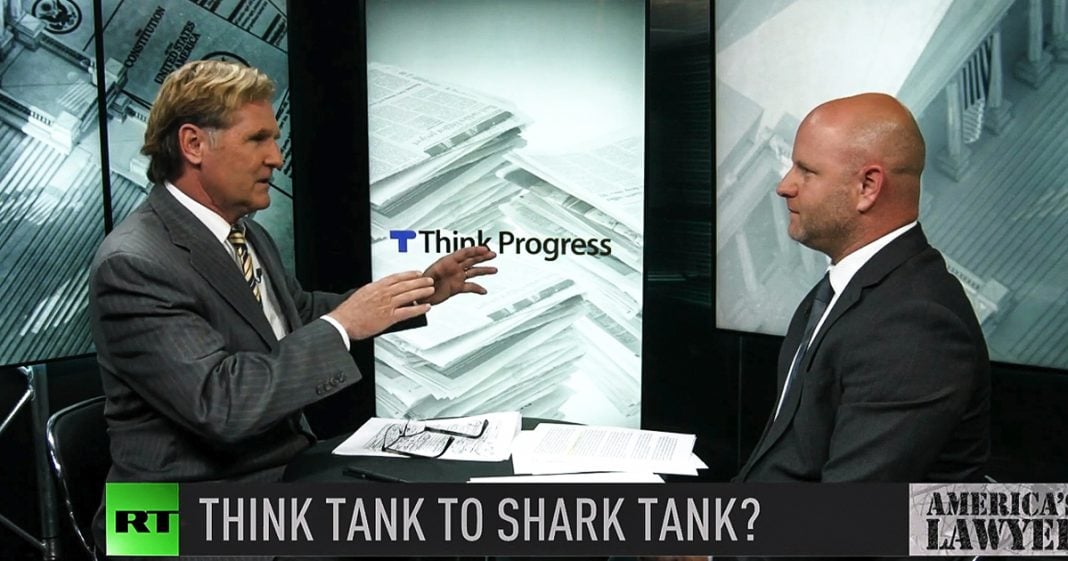 Mike Papantonio:             The Center for American Progress recently announced that they were shutting down the popular website ThinkProgress, but there’s far more to the story than most people realize. First of all, what a huge loss.

Mike Papantonio:             ThinkProgress. What a, what a, what a huge loss. This story makes me remember the days of Air America when you had the establishment Democrats that Air America, think of what you had. You had, you had Al Franken, Janeane Garofalo, Sam Cedar, Chuck D, Bobby Kennedy, this, this great array of commentators that we’re building a national talk radio system. But when we needed to raise money, Bobby and I did a, did a, a show back then. It was the first time we did Ring of Fire. It was, God, I can’t even remember how long ago. But we were trying to raise money for it.

We would go to these folks and if it wasn’t their idea, what I call the snowflake elite, if it wasn’t their idea, or if you weren’t going to talk about only their topic, they wouldn’t give you a dime. Soros was a great example. Here’s this guy spreading money all over the world. And here we were just asking, look, keep this idea of a progressive radio network alive. Couldn’t get a dime. We all raised as much as we could and stayed in business as long as we could. This is exactly that story, isn’t it?

Farron Cousins:                  It is, and what you have is the Center for American Progress, which is the think tank CAP, and think tanks just like CAP, they get funded with corporate money. And ThinkProgress, which started during the Bush administration did great work, you know, talking about the, the torture issues, the endless war. Did great work during the Obama administration talking about the crimes of the bankers and the lack of prosecutions and they’ve been the, the best out there on environmental issues since day one. But because those didn’t fit in line with what the corporations that fund CAP wanted them to talk about, ThinkProgress suddenly decides, you know what, or CAP decides, we’re going to get rid of ThinkProgress. We’re going to fire the actual journalists. The people in the union, by the way, they only got rid of the union people.

Mike Papantonio:             I don’t know who wrote this New Republic article that explores how dysfunctional what I call the snowflake elite is of the democratic arm, but they talk about the fact and it was so well written. They talk about the fact that if, if it’s not, it, when you go to democratic elite and ask for money to help further a great idea like this organization ThinkProgress, unless, and this particular writer gave an example. He said if it wasn’t all, if everything that you talked about was not perceived as devoted solely to a fulltime basis of unseating Trump, it wasn’t important.

Farron Cousins:                  Well, and the problem is, and we’ve seen this in a lot of left leaning media that’s really more corporate Democrat than progressive, obviously. They only want to talk about Trump, but they want to treat Trump as if he is the cause of all the problems we have in this country today. They want to ignore the bad things that happened during the Obama administration. They want to go after the people who are saying, listen, Obama wasn’t that great. He did some bad things. You know, we, we get it all the time.

Farron Cousins:                  That’s the sin of ThinkProgress was saying, hey, hold up. Obama wasn’t actually that great on the environment all the time. He did some good things. He did some really not good things too, but they don’t want to put any of the blame on him. Bad things only started happening when Trump took office, according to the establishment Democrats.

Mike Papantonio:             Yeah, that they were criticized, this group was criticized, ThinkProgress criticized for, for going after Israel when Israel was wrong. They were going after Hillary Clinton and saying she was a loser. Get on a different horse. DNC couldn’t handle that. Thanks for joining me. Okay.

Mike Papantonio:             A recent report released by the prison policy initiative has sent the media a buzz. It found staggering high recidivism among the people of color as well as people from underprivileged backgrounds often trapping them in a revolving door. Justice reform activist and former DC police officer Ronald Hampton joins me to talk about it. Ronald, first of all, let, let’s start off with just a couple of facts and figures because the facts and figures tell the story. The report that indicates that among the nearly 5 million people incarcerated every year, nearly one quarter of those people are repeat, repeat offenders. Talk about that.

Ronald Hampton:             Well, they are because they have a lot of problems and in our society we don’t deal with those problems. A lot of times we lock people up rather than try to find out what are the root causes to the situations that happen. And it can be as minor as people in vacant houses, they can be people who are out panhandling on the street, all of those kinds of things. And we actually have had cities in the last five, six, ten years that had developed laws that prevent people from panhandling. And if you do, you get arrested. Well, if a person gets arrested panhandling for money, then they don’t have the money to be able to pay out. And then we have other laws that’s been enacted that surround that same kind of scenario. And so what we, what we have done is provided a way to incarcerate people even more and less of a way to deal with the root cause issues that they confront every day.

Mike Papantonio:             Yeah, you know, it’s interesting, presidential hopefuls this time at least are bringing this topic up. You’ve got Bernie Sanders, Elizabeth Warren, they recently unveiled these sweeping criminal justice reforms. They cite overcrowded prisons and millions of minorities being disenfranchised by what they consider racially charged systems of incarceration. Their proposals include repealing tough on crime legislation, ending mandatory minimum sentencing, putting up a stop to cash bail system.

Mike Papantonio:             Does that make sense to you? You’ve worked in this your entire life. Does any of that make sense? Or is it, is it just gonna be something that makes the process worse as we’re already hearing from the conservative side of it? And that is that this isn’t a social issue. This isn’t, this doesn’t have to do with poverty. These are just people who commit crimes. I mean, that’s, that if you really reduce what the other side is saying, that’s what they’re saying and that’s what the population is buying into, that you can’t do anything to change this. This is just endemic of the population. Those arguments are actually being made right now.

Ronald Hampton:             Well, I disagree with that. I think if we invested as much in education, housing, into healthcare in the type of services that we provide to individuals in our community rather than an, and while reducing the criminal justice budgets in our cities and counties and invest that money in people, then we will begin to see the kind of services increased and the services as well as the decrease in the prisons population of these people. It clearly has been a problem. And so if they are talking about reform, what I would call restruction, they then they have to consider those kinds of issues. The entry to the criminal justice system is through arrest and police go out there every single day and carry out the, the mission of our society.

And if people who are poor, people who are mentally ill, people who are down on their luck, people who don’t have housing and jobs are the target of those pieces of legislation and the laws, then those are going to be the people who get locked up. Why would you lock up someone who doesn’t have a job, place a bail on him, a cash bail on him or her who can’t pay the bail and then end up spending 90 to 120 days in jail? It doesn’t make sense. When we could be servicing that person, providing them with some social services and the other things that they need to make them whole and productive individuals in our society, I think that’s the way to go.

Mike Papantonio:             Yeah. Unfortunately we have, we have a justice system that’s built around retribution.

Mike Papantonio:             Much more than it’s built around rehabilitation or anything really creative. Ronald, thank you for joining us. Okay. I don’t have, I don’t have a lot of hope that Capitol Hill is going to do much with this, but they might, at least the discussion is out there. We’ve got, we’ve got two, at least two presidential candidates that have enough brains to actually be talking about this. Thank you for joining me, Ronald. Okay.