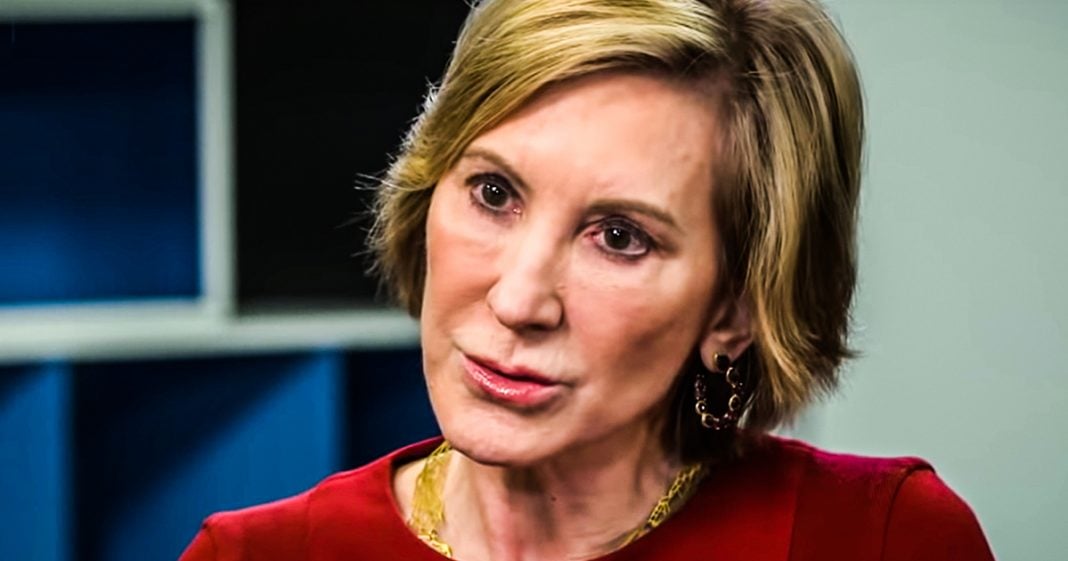 Former GOP Presidential candidate Carly Fiorina said in an interview this week that President Trump should absolutely be impeached. That’s not too surprising, but what did come as a mild surprise was the fact that after she made that claim, she also said that she won’t rule out voting for him in the next election. This tells you everything you need to know about the conservative mindset, as Ring of Fire’s Farron Cousins explains.

*This transcript was generated by a third-party transcription software company, so please excuse any typos.
Former Republican presidential candidate who for a brief moment in August, 2015 was actually leading the Republican primary. Carly Fiorina gave an interview on CNN this week where she said that it is absolutely vital that Donald Trump be impeached. Pretty strong words from a pretty, you know, die hard Republican who really wanted to be the president instead of Donald Trump. You know, this isn’t some kind of mealy mouth, you know, wishy washy. Maybe I’m conservative, maybe I’m not type woman. We know what Carly Fiorina stands for and if she is on the side of impeachment saying that it’s vital. Hey, that’s pretty strong, isn’t it? Well, no, not exactly because Carly Fiorina’s interview was seen as an absolute train wreck and I don’t even think she knows exactly what she stands for. Here’s just a couple of quotes from her on this. This is crazy. I think it is vital that he be impeached whether remove this close to election, I don’t know. But I think the conduct’s impeachable and what I regret is that the principles that are being debated in this impeachment trial, separation of powers, abuse of power, obstruction of Congress, those principles are not as immediate or intense as partisanship or people’s belief that the policies that I care about impact me personally, I don’t really know what that sentence means. And maybe somebody in the comments can help explain that, but those are just lots of different words that she kind of put together and said, well I get, I guess that’s a sentence. So here it is, but it gets weirder. She then suggested that Trump may still get her vote in 2020 depending on who the democratic nominee is. So she totally doesn’t like Donald Trump wants him to be impeached. Maybe not removed. Cause I guess it’s close to an election and that matters. Uh, but I’ll probably still vote for him. I mean that’s what that means, depending on who the democratic nominee. No, no, no, no, no. Carly, you’re admitting you’re going to vote for Trump in 2020 that that’s what you just said. So you don’t like him. You think he broke the law? You want him impeached and then you’re going to go to the ballot box in 2020 and vote for him again. Smart, real, real, real cool. She then later on in the interview has this to say, which also contradicts her. Oh my God, Trump’s bad, but I’m going to vote for him. And then she says loyalty to Trump is what I think it stands for. Sadly, the GOP adding that, she doesn’t recognize the Republican party anymore. It’s so sad. She doesn’t recognize. She doesn’t know who they are. They’re just blindly supporting Trump even though he breaks the laws. You know? It’s like if they said they want him impeached, but then they would still vote for him in 2020 Carly. That’s literally what you already did earlier in the interview. You’re like, yeah, I, but I’m gonna vote for him and I can’t believe Republicans are still gonna support Trump. You, you just said, you just said you were going to do it like this. This is crazy. This is a crazy interview with a person who might not be all there anymore. That’s all I have to say about Carly Fiorina’s mental health. Either that or she knows she’s a hypocrite and can’t remember which side of the aisle she’s supposed to be sitting on right now. But the truth is Fiorina’s interview there is actually very common among Republicans. Yeah, they don’t like Trump. I mean look at his approval rating across the country. It has been in the negative since he took office. He has never hit 50% in approval rating in the aggregate polling. Never. I know he says all the time he’s at 50% but that’s according to a ras mucin highly skewed, unreliable poll, the aggregates note, those keep them around 41 42% on a good day. So most people in this country don’t like him. A lot of Republicans aren’t huge fans of him or his policies, but much like Carly Fiorina, no matter what he does, no matter what he says, and no matter what laws he breaks, they’re still gonna hold their nose and vote for him in 2020.