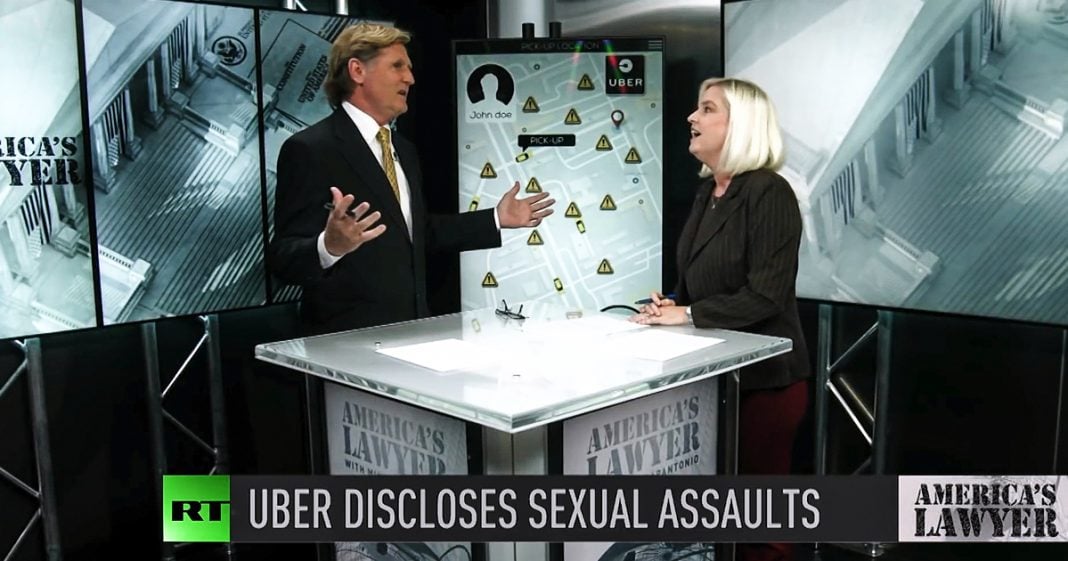 Via America’s Lawyer: Legal journalist Mollye Barrows joins Mike Papantonio to break down Uber’s first-ever safety report, which documents over 3,000 cases of sexual assault that occurred during rides in 2018. The ride-sharing service has exploded in popularity, but just HOW safe are riders and drivers?

Mike Papantonio:             Uber has just released its first safety report detailing incidents that took place in 2018 and it’s documented over 3000 cases of sexual assault. Although these cases make up only a small fraction of the trips, many people are raising concerns about both rider and driver safety when using the immensely popular ride sharing service. I have legal journalist Mollye Barrows here to break down these findings. Tell me about these numbers. Okay, so from what I understand, Uber took it on themselves to be transparent.

Mike Papantonio:             You know, assault resulting in murder. Give me your take on this story, Mollye.

Mollye Barrows:                A couple of different things. Uber is starting to struggle financially. They have been kicked out of London, they’ve lost their license in London over safety concerns. I think this is Uber’s attempt to use and create a benchmark of what they’re seeing, but it’s only in America. And, you know, they service 65 other countries and we’ve not seen anything similar as far as these stats and how it relates to safety from those other countries. But we do know other countries, other clients, if you will, have had these similar safety concerns. So I think this is Uber’s attempt to basically say, hey, we’re trying to be transparent. We’re trying to clean up this company’s image.

They’re taking a number of steps, not only to properly vet their drivers as far as their driving records and their criminal history, but they’re also doing more to train their employees when they hear complaints, whether it’s an unwelcome comment or something as significant as rape or touching. They are now starting to categorize and specify these types of complaints and work with safety experts and organizations to deal with this.

Mike Papantonio:             Okay. So, so from, so from the beginning Uber’s pitch was they sold the idea, anyone can be a driver. I mean, that was their pitch.

Mollye Barrows:                Well, last year they kicked out I think 40,000. Yeah. Since 2018 deactivated 40,000 drivers in the United States. And that was London’s concern by the way. One of the reasons that they did not renew their license to drive in London is because they have allowed drivers to basically, who had been discontinued from the Uber program, to upload pictures and as if they are still current approved drivers for Uber. So people are picking up, they’re picking up passengers claiming to be Uber drivers when they’re actually not licensed or approved and they’ve been kicked out of the Uber program. So that’s happening overseas and Uber’s saying, well, we’re addressing similar concerns here. We’re making our system so that people can’t access it like that or, you know, pretend to be an Uber driver.

Mike Papantonio:             So here’s, here’s their big pitch. You know, America got tired of going to New York or Chicago or the big cities and getting in a taxi that it looked like a family of 10 was living in the back seat.

Mike Papantonio:             Garbage there. The smell was reprehensible. I mean, it was awful. And so Uber comes in and says, we have a better product. Our drivers are going to keep our, your, your cars clean. We’re going to know, and when you step into that, that car, most people think this is a trained driver.

Mike Papantonio:             That they’re at least as good as a taxi cab driver that’s has to have special standards. Nothing’s further from the truth is it?

Mollye Barrows:                No, it’s the same concept. They’re basically, with these ride hailing services, they’re hiring independent contractors. They’re claiming to have vet them, we have to take their word for it that they have good drivers license backgrounds, that they have clean criminal background checks and that they are staying on top of that in case something were to change. But you’re seeing lawsuit after lawsuit, not just in the United States, but also in countries around the world where people have been victims of crime, either by a driver or the drivers themselves have said, I’ve been put in an unsafe situation by Uber’s practices.

Mike Papantonio:             First off, everybody that jumps into an Uber when it pulls up is insane.

Mike Papantonio:             Because a lot of these cases have evolved out of people that are just saying they’re Uber drivers.

Mike Papantonio:             I mean, they have Uber there. They see somebody, you know, some young girl that’s holding her phone, like she’s waiting for an Uber driver.

Mike Papantonio:             Pulls up, the young girl jumps in the back seat without asking any questions about who it is, right?

Mollye Barrows:                I experienced that. I was in Boston for a work trip recently and I hailed an Uber to go come back to the hotel and I, and a stranger walked right up and opened my door. And I thought, wow, these Uber people are really on top of it. But no, he thought it was his Uber and he was about to mow me down to get into the back of the Uber. So you’re exactly right. It’s kind of like what your parents warn you not to pick up hitchhikers. It’s the same concept, except apparently it’s okay when they call it a, a ride hailing service.

Mike Papantonio:             I’m anxious to see the sustainability of Uber and Lyft as years go on. I think they can make it, but they gotta change some things.