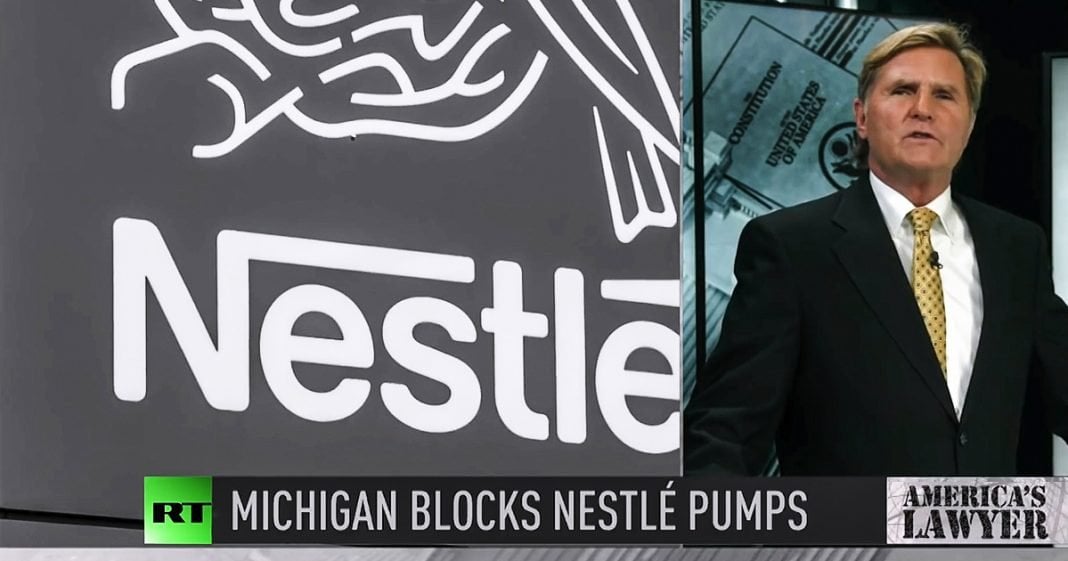 Via America’s Lawyer: A court of appeals in Michigan has told Nestle that bottling water is not an essential public service and therefore they can’t create a new pumping station in the state and steal more water. Mike Papantonio explains more.

Finally tonight, some good news. A court of appeals in Michigan has told Nestle that bottling water is not an essential public service and therefore they can’t create a new pumping station in the state and steal more water. Osceola Townships in Michigan was attempting to block Nestle from moving into the area and stealing their fresh water as they’ve done all over the world. It’s been something Nestle’s been doing for decades all across the globe. The company moves in like a swarm of locusts and they destroy whatever resources they can put their hands on. Then they leave town. They haven’t been charged with anything and taxpayers have to fix, has to fix this.

This won’t be happening in the small Michigan, Michigan community, after a three judge panel told the company that their bottled water can’t be considered an actual source of water for the community because tap water is readily available. Do to the local restrictions on any nonessential resources extraction, Nestle’s prohibited from taking clean water away from its residents. This ruling is a huge blow to one of the worst corporate, the absolute worst, worst corporate offenders on the planet. And I don’t say that lightly because I work on the other side of most of them. But maybe it’s going to show other courts that they don’t have to bow down to corporate locusts like Nestle.

That’s all for tonight. Find us on Twitter and Facebook @facebook.com/rtamericaslawyer. You can watch all RT America programs on Direct TV, 321 is the channel, and also stream them live on YouTube. I’m Mike Papantonio and this is America’s Lawyer, where every week we tell you the stories that corporate media is ordered not to tell because their advertisers simply won’t let them. Have a great night.