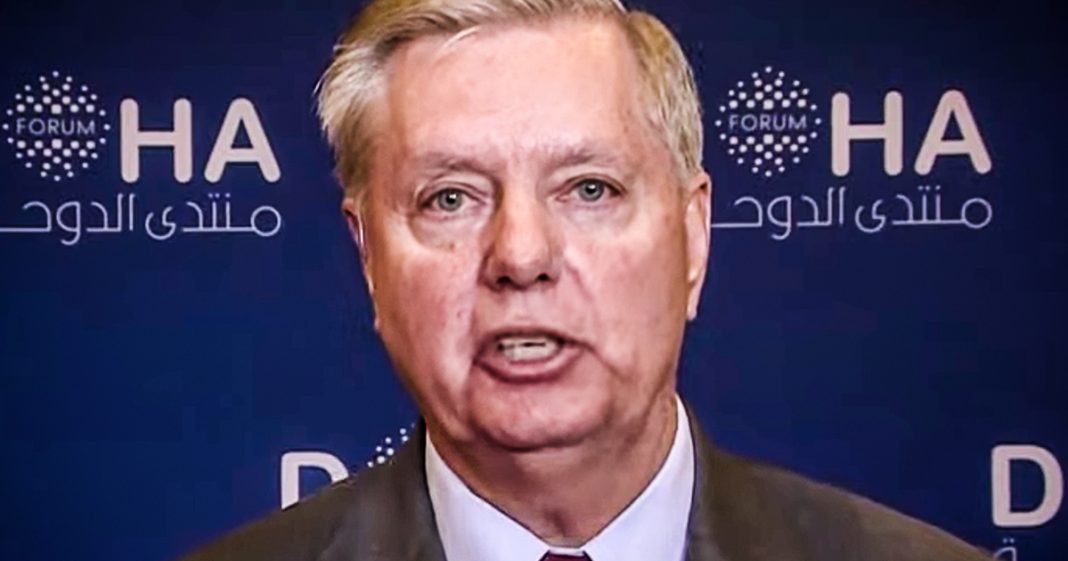 Lindsey Graham has extended an invitation to Donald Trump’s personal lawyer Rudy Giuliani to testify in the Senate’s impeachment trial, or possibly even just to the Senate. Graham wants Giuliani to share all of the Joe & Hunter Biden conspiracy theories that he’s been compiling during his time in Ukraine, even though this has nothing to do with the issue at hand (and they are entirely false.) Ring of Fire’s Farron Cousins explains what’s happening.

*This transcript was generated by a third-party transcription software company, so please excuse any typos.
On CBS has faced the nation. This past Sunday, Lindsey Graham invited Rudy Giuliani to come and testify before the Senate to tell them what kind of whacko conspiracy theories he found about Joe Biden and Hunter Biden during his recent visit to Ukraine. Now, Lindsey Graham did not refer to them as conspiracy theories. Lindsay Graham does not believe they are conspiracy theories, at least publicly, but Lindsey Graham still wants Rudy Giuliani to come on over. Tell us what you found so that we can miss direct the public and make them think that Joe and Hunter Biden are the ones being impeached rather than Donald Trump. Now, Rudy Giuliani, I guess he just got back from Ukraine and he tweeted out a very long Twitter thread. I guess it was yesterday, maybe it was Saturday. I don’t know which day it was, but it was nuts. Like absolutely pure insanity coming out of Rudy Giuliani. He said he found all kinds of evidence. You know, Obama, you know, maybe there’s some money laundering. Oh my God, you wouldn’t believe what Rudy Giuliani and the one America news network that he was with found about Joe and Hunter Biden. And of course Obama. And he also pointed out the Victor Shoken, the prosecutor who was fired after the world demanded he be fired for not going after corruption, allegedly Shoken according to Giuliani’s tweets was poisoned and died twice, but he got better. So I guess he’s okay after dying twice as Rudy Giuliani put it. So good for him, right? I mean, Hey, you know, you overcame death twice. Rudy Giuliani is crazy and I don’t think there’s an easy way or a better way to phrase that. Rudy Giuliani’s crazy and anyone who takes him seriously is just as crazy. But here’s another thing. While Rudy was over there, while Own one American news was over there too, which is becoming one of Donald Trump’s favorite news networks, um, news broke that at one point Own the network had attempted to bring over a millionaire, a Ukrainian national millionaire that help him get a green card to come over here to the United States in exchange for dirt on Joe Biden. But unfortunately they weren’t able to make that deal happen because that billionaire or millionaire, excuse me, uh, got arrested for embezzlement over in Ukraine before they could get him out of there and over here to United States. So they were trying to bring over a criminal who they knew was going to be arrested soon and that’s why he wanted to get out of Ukraine. But only if he gave them dirt on Joe Biden. Here’s the thing, I don’t like Joe Biden at all. I will be furious if Joe Biden becomes the democratic nominee. But I also firmly believe with all of my Biden hating heart that he and his son didn’t do anything wrong in this situation. Folks, there is no evidence whatsoever to show that Joe and or Hunter Biden are guilty of anything. Hunter Biden, definitely not guilty of anything, but that is the narrative that these Republicans are going to push and a lot of Republicans out there outside the beltway actually think Biden did commit some kind of crime, which just shows you that real or imagined his baggage is going to derail his campaign if he becomes the nominee. We can do better. We have better nominees out there. Folks, please in the name of all things, Holy. Don’t vote for Joe Biden in the primary because Republicans have been working to destroy him for the last 12 months, and it’s only gonna get worse. You’re gonna have crazies like Lindsey Graham and Rudy Giuliani pushing conspiracy theories on the Senate floor about the Biden family. We can absolutely negate all those attacks right now by not nominating Joe Biden folks. It really is that easy. That’s all we have to do to put this entire thing to rest.