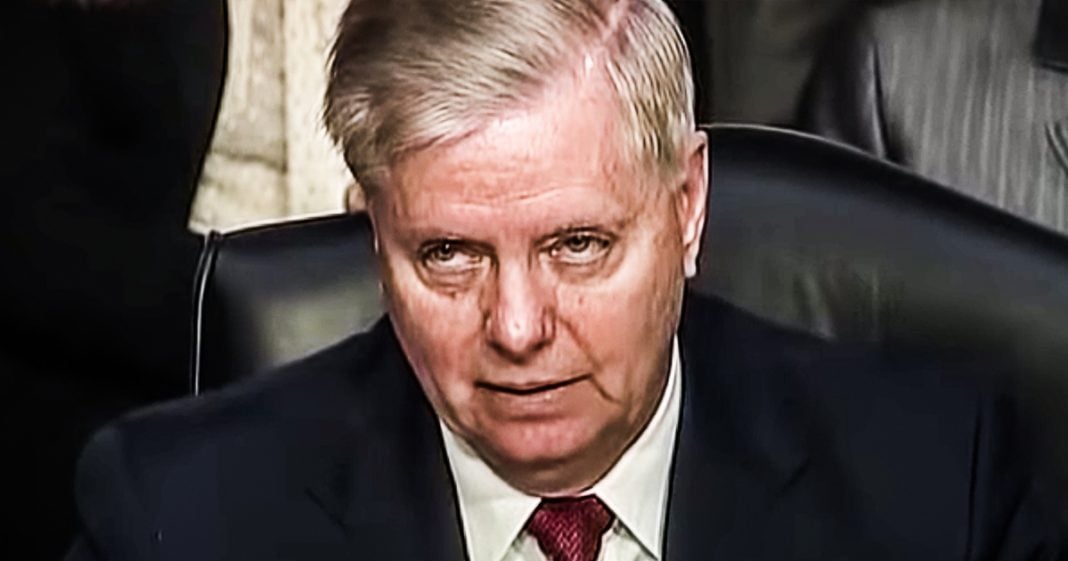 During an interview with CNN this weekend, Republican Senator Lindsey Graham admitted that he will not be a “fair juror” as he put it, and instead will vote to clear Trump of all charges against him in the upcoming Senate impeachment trial. The only thing surprising about this statement is that Graham said it out loud, instead of just keeping his mouth shut like a good little lapdog. Ring of Fire’s Farron Cousins discusses this.

*This transcript was generated by a third-party transcription software company, so please excuse any typos.
This past Saturday, Republican Senator Lindsey Graham made it absolutely clear that he will not be a fair juror in the Senate impeachment trial for Donald Trump. And in fact, he’s going to do everything he can in his power to make it end very quickly so that we can all move on and he added, nothing’s going to change his mind that Donald Trump is innocent. So here we have a guy, and I’m going to read his exact quotes in just a moment, but we have a guy who has to act as a juror in this trial. He gets a vote guilty, not guilty, and he’s already telling us, my mind is made up before I even get to lay my hands on that evidence. I’m going to vote to exonerate this guy. Nothing is going to change my mind in any court in this country would kick that juror out of that courtroom and half a heartbeat. So why can’t we do something about this with Lindsey Graham? Why can’t we remove him from the voting process? His mind is made up. Mitch McConnell’s mind is made up. Rand Paul’s mind is made up. Rand Paul almost came out and said something similar to what Lindsey Graham said, but he stopped himself from saying that, Nope, my mind’s made up and I’m not going to change it. So he was a little bit smarter than Graham because here’s the thing. We know that Republicans are going to do this in the Senate anyway. We know all of their minds are made up. We know all of them are going to vote to exonerate Donald Trump, and you’re probably gonna throw in a couple of Democrats to like Doug Jones and Joe Mansion. The problem is none of the other folks are dumb enough to say it out loud. But Lindsey Graham is, and here’s exactly what he told CNN. This thing will come to the Senate and it will die quickly and I will do everything I can to make it die quickly. I am trying to give a pretty clear signal. I have made up my mind. I’m not trying to pretend to be a fair juror here. What I see coming happening today is just partisan nonsense. Personally, I think president Trump will come out of this stronger. And the good news is that everybody in politics in America needs to prove to the American public we’re not all completely crazy. So there may be a spirit of compromise coming post impeachment born of political necessity, if anything else. So you’re saying you’re not going to be a fair juror. So is that an implication that if you were a fair juror, you would vote to convict and remove Donald Trump? Because that’s kind of what I’m taking away from that. But instead you’re choosing to bury your head in the sand and pretend that everything is fine and this is all gonna blow over and Trump’s going to be stronger and Democrats are going to come start working with us again. Yeah. None of that is going to happen other than of course Donald Trump getting acquitted in that Senate trial. That’s a given. But Democrats aren’t suddenly going to come over and start working with you on your horrible policies. Lindsey Graham, Mitch McConnell is not suddenly going to start debating that backlog of bills that the house has sent him that’s sitting on his desk. Republicans are going to continue to obstruct every single piece of legislation that comes their way that could possibly in the slightest benefit the American public. So no, Lindsay, you’re not going to work with Democrats. You’re going to ignore the very few bipartisan bills that Democrats and Republicans in the Senate have, have tried to get past. You know, like the ones to secure our elections ahead of 2020 but you’re going to be the same horrible, grumpy little human being that you have always been right along with Mitch McConnell and hopefully the both of you feel the repercussions from that, from the voters in your States in 2020.