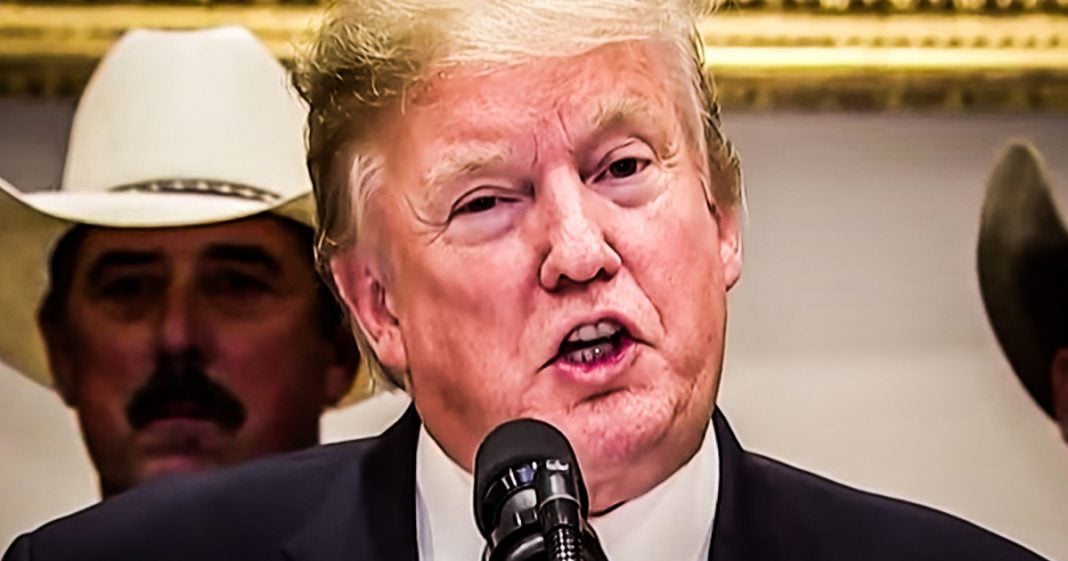 The billions in bailout funds that Donald Trump has released to farmers in this country is being concentrated on the big farmers, leaving small, non-corporate farmers with a few dollars over $5,000 in their pockets. This is an absolute disgrace, as the fat cats don’t need any additional help because they aren’t living season to season. Ring of Fire’s Farron Cousins explains what’s happening with the bailout.

*This transcript was generated by a third-party transcription software company, so please excuse any typos.
The environmental working group has released a report showing that the majority of Donald Trump’s farm bail out money is actually going to big industrial farms and not the small farmers that he promised would be the main beneficiaries of this bail out that United States taxpayers are paying for. Here’s what the group found. Um, the top 1% received 13% of the federal payments or more than $177,000 a piece. The bottom 80% on the other hand, got an average payment of $5,136. Three of the fat cats received more than $1 million each. Well, 45 of them got more than half a million dollars. So the average payment to 80% of farmers in this country was about $5,000. That’s it. We destroyed your livelihood with these trade Wars. My policies are driving you into the ground. Here’s five grand. I don’t want to do it right. Oh, but you’re a big industrial farm. You make millions upon millions, if not billions of dollars a year. And I have somehow harmed you of my God. I am so sorry. Here’s $1 million for you. Here’s the thing. This is why this is so infuriating, not just because it’s Donald Trump trying to buy votes, but because these small farmers survive season to season. Okay? They don’t have big stockpiles of money. They don’t have millions of dollars sitting in the stock market or a hedge fund somewhere or sitting off shore. What they’ve got is in their bank account and when that runs out, they got nothing but these big industrial farmers sitting on millions and millions of dollars. Yeah, they can weather it. They can stick it out for a couple of years before they even start to feel a little bit of a loss here, but these other farmers can’t. Three, four months at a time per season here. That’s how they live. That’s their livelihood and you’re offering them a poultry $5,000 and you think that they’re so po-dunk and just absolute garbage people. That $5,000 is enough to buy their vote back. Hopefully it’s not. Unfortunately. I’m sure for some of them it is because we’ve seen the interviews with farmers who’ve gone bankrupt from a trade war saying, I’ll never turn on him. Okay, well that’s a psychosis right there that needs to be diagnosed and dealt with with medicine or therapy. But for these other folks, the folks who aren’t necessarily political, maybe they lean right? Maybe they lean left. They’re just trying to live their lives and they’re finding that impossible to do, and sure, $5,000 may help for a couple weeks maybe, but it certainly isn’t enough to recoup the that these people are experiencing. They need real help and not just in the form of a bailout. They need this trade war to end immediately. That is the only thing that is going to save these farms, but yet Donald Trump tells us, he may drag it on past the 2020 presidential election. These farmers won’t survive that. Certainly not if the government’s given them $5,000 every six months, they’re going to go under. But the big guys, as the environmental working group pointed out in this new report, they’re going to be just fine. They’re not going to suffer any problems. They’re just going to get a little bit more money to pad their bottom lines, maybe give their CEOs a little bit bigger bonus, and when all is said and done, maybe throw a couple million to the campaigns of the Republicans.