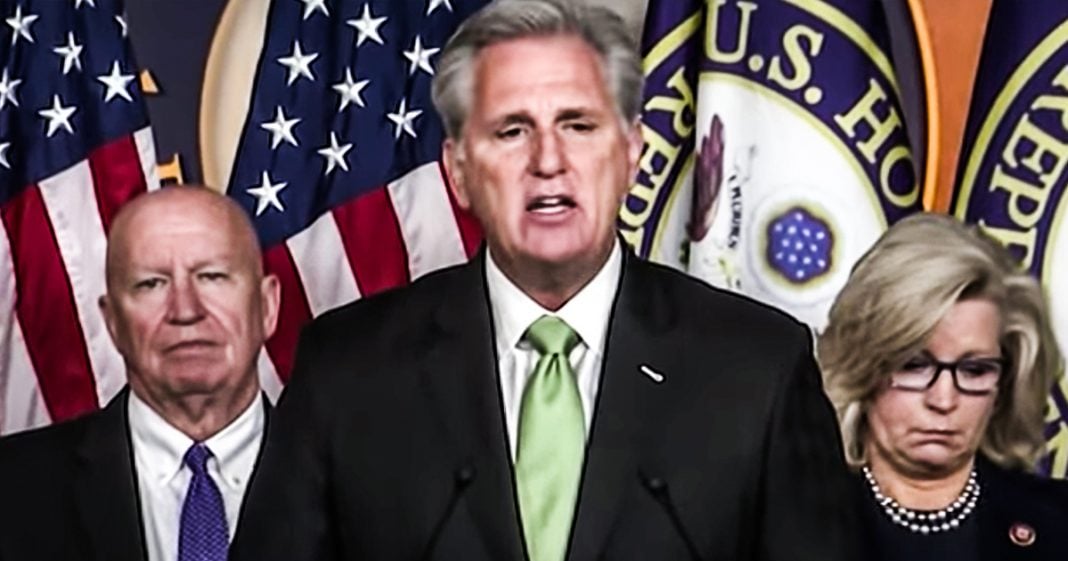 Republicans in the Senate have all but guaranteed that there will be zero chance the President will be convicted and removed during the Senate trial on impeachment. They’ve announced that there will be no witnesses, no new evidence, and they want to have it wrapped up in just a week or two. This isn’t how the process is supposed to work, but this is also completely predictable. Ring of Fire’s Farron Cousins discusses this.

*This transcript was generated by a third-party transcription software company, so please excuse any typos.
Earlier this week, uh, both in a Twitter post and in a video, uh, I mentioned the fact that we need to kind of scale down our expectations for the impeachment inquiry because Republicans in the Senate are not going to vote to convict and remove him from office. Uh, people weren’t necessarily happy with that. They, they want to have hope that this could happen. And unfortunately, here we are, what, two maybe three days later and a story came out from the Washington post confirming pretty much everything I said, Republicans in the Senate have decided that their path for Donald Trump’s impeachment trial in the Senate is going to be the path of least resistance. And as it stands right now, they plan on not allowing any witnesses to testify. They’re not going to allow any new evidence to be introduced and they want to have the whole thing wrapped up in just a couple days. To put it in other way. The Republicans are letting the public know that the trial they’re about to have in the Senate probably in January, is going to be a total and complete sham designed solely to quickly acquit the president of the United States. So it doesn’t matter if we have people out there like Susan Collins or Mitt Romney or Lisa Murkowski, kind of wondering like maybe he did commit a crime, doesn’t matter because the Republicans are going to set the trial up in such a way that they’re not going to be able to look at the evidence. They’re not going to hear from any witnesses. So there’s going to be no evidence of wrongdoing by the president giving these mealy mouthed weak ass conservatives clearance to say, well, I didn’t see anything wrong. So of course I voted to not remove him. And that’s why they’ve designed it this way. They’ve also designed it this way so that again, they can all go out and do a press conference and say, listen, we just held a trial. We didn’t see any evidence. We didn’t hear any witnesses tell us that he did something wrong, so we had no choice. If the glove don’t fit, you must acquit. They’re going to tell us, and they’re going to leave out the part and hope that we don’t remember that they didn’t call any witnesses, that they didn’t allow any new evidence. They’re going to gaslight the public into thinking they did a thing that we already know they’ve said they’re not going to do. So don’t fall for that crap, but unfortunately there will be a lot of people in this country who will fall for it because the Democrats are going to do such a horrible job with their messaging as they always do, and not explain that the entire Senate trial was a sham. Here’s the thing, though, it may not. There’s a small chance, it may not play out that way because there is one person who is actually super pissed that they’re not going to allow witnesses to be called, and that person is Donald Trump because Donald Trump and his legal team had planned to call Adam Schiff as a witness, Nancy Pelosi as a witness, Joe Biden as a witness, Hunter Biden as a witness. They wanted all of those people to come and have to testify in the Senate trial. And I am here for that all day. I actually want that to happen because I think that would be the best way to go ahead and clear Joe and Hunter Biden of any wrongdoing here. And I’m not even a fan of the Bidens. I’m not a fan of Pelosi and Schiff, but I think the public should hear from them to put to rest these ridiculous Republican talking points that somehow they’re the ones who did something wrong that needs to happen. But the Republicans don’t want it to happen in the Senate because they know it’ll have the outcome I just said. These people didn’t do anything wrong, and if they testify it’s going to make Trump look stupid and more like a criminal and it’s going to make all these bad Democrats look much better in the eyes of the public. So this sham trial has two functions. One, to prevent any Democrats from being able to clear their names. And two, from allowing the actual criminal Donald Trump to be able to clear his.