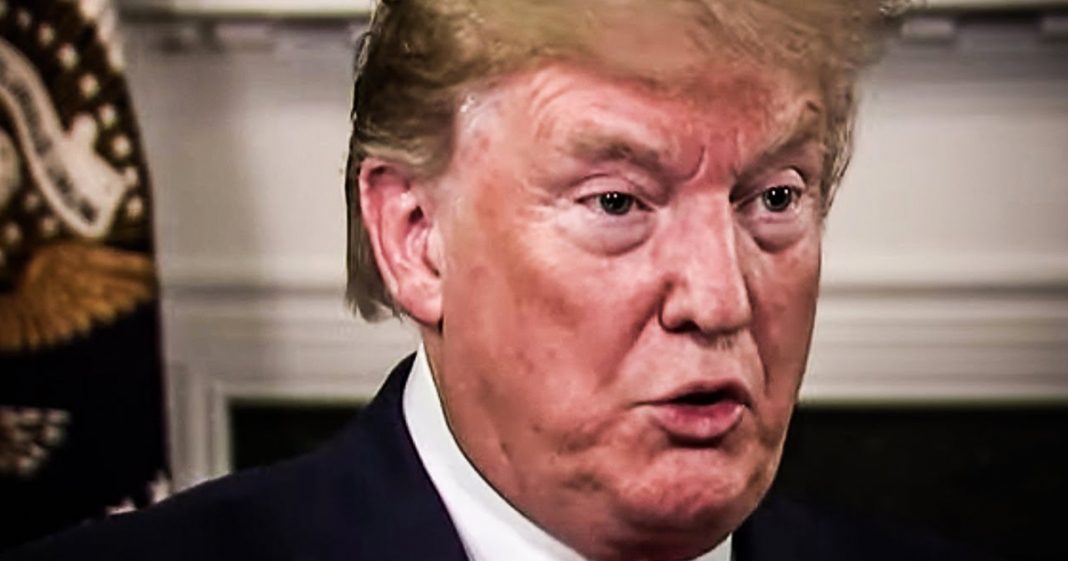 The latest polling data offers some bad news for Donald Trump, as his support among independent voters has dipped by 5 points. Pollsters believe that the main reason for the dip is because of the impeachment inquiry, which is only just now starting to heat up. If this trend continues, Trump’s path to reelection will become even narrower. Ring of Fire’s Farron Cousins discusses this.

*This transcript was generated by a third-party transcription software company, so please excuse any typos.
Some really bad news this week for Donald Trump as a new poll shows that his approval among independent voters here in the United States has fallen by 5% according to this new poll, which, Hey, a thousand people sampled and only a 3% margin of error. So it is considered a good poll. His approval rating is now 39% among independent voters. Now, that’s not the only piece of bad news. His support among Republican voters also fell by 3% down to 85% nowhere near the 97 or 98% approval among Republicans that the president consistently says that he has without ever citing a poll, obviously, because it doesn’t actually exist, but 85% approval among Republicans. You know what? That’s decent. We’ll take it. 15% of Republicans say they don’t approve. Sure, maybe 15% of Republicans actually have a brain out there. But for the independent voters, he now is below 40% with them. And here’s the God’s honest truth, folks. You can’t win an election if you can’t pull in a majority of those independent voters, whether it’s a Democrat or Republican running, you’re going to get your base. Yeah, you’re going to have some of them that stay home, right? You’re going to have a couple who actually do flip and go vote for the other side. But for the most part, democratic bases are solid. So our Republican basis, it’s those independence. And believe it or not, folks, some independence are registered as Republicans. Some are registered as Democrats just cause they defaulted to one. But in reality, they’re not paying attention to politics on a day to day basis. They occasionally hear something on the news, they occasionally pick up a newspaper, but for the most part, they don’t care. They go about their lives hoping a politician doesn’t screw them up. And when you lose those people, you lose the election because these people also are struggling. And that could be one of the reasons they’re not paying as close attention. You know, kind of hard to tune in to Rachel Maddow talking about Russia every night when you can’t afford your healthcare bills and you’re getting calls from bill collectors every single day, right? Kinda got focus on the latter there. And that’s what these people are doing. If the Democrats are smart, this goes both for the infrastructure of the party and the voters themselves. You’ll put up a candidate that can attract these independent voters. And I know a lot of people right now think that it just Joe Biden who can do that. But I’m promising you it’s not, the Trump campaign is already attacking Joe Biden as a demented, senile old man. And yeah, that’s projection because Trump is those things as well. But let’s be honest, Biden seems to be too, and Trump already has the upper hand on calling him the crazy one. So if Biden throws that attack back at him, he’s just going to look like he’s repeating the same thing. Biden aint it, you want to get these independent voters, give them something to vote for rather than something to vote against. That’s what’s been missing from the democratic party. Hillary Clinton was somebody to vote for against voting for Donald Trump. She didn’t have anything really to offer anything material for the majority of people in this country, just more of the same, more of the same, not holding wall street accountable, more of the same rich getting richer while the middle class and underclass disappear. there are two candidates right now offering real material advantages for the middle class and everyone and if we put up one of those two candidates, I think that’s an easy path to victory. I think it’s a better path to victory with Bernie Sanders than Elizabeth Warren, but I also think Elizabeth Warren could win this thing. Bernie Sanders is far more progressive, proposing far more progressive policies. That is the best route. Warren is absolutely number two and after that, based on what we’ve seen from everybody so far, I’d probably have to go with Andrew Yang is number three. I think any one of those people on a national stage against Donald Trump, I think they can do it. I think they can pull it off because they’re the people who are actually offering those of us who’ve been struggling for decades, something better. And that’s what these independent voters want. And that is why they’re abandoning Trump. But I promise they will go right back to him if the Democrats offer them more of the same.