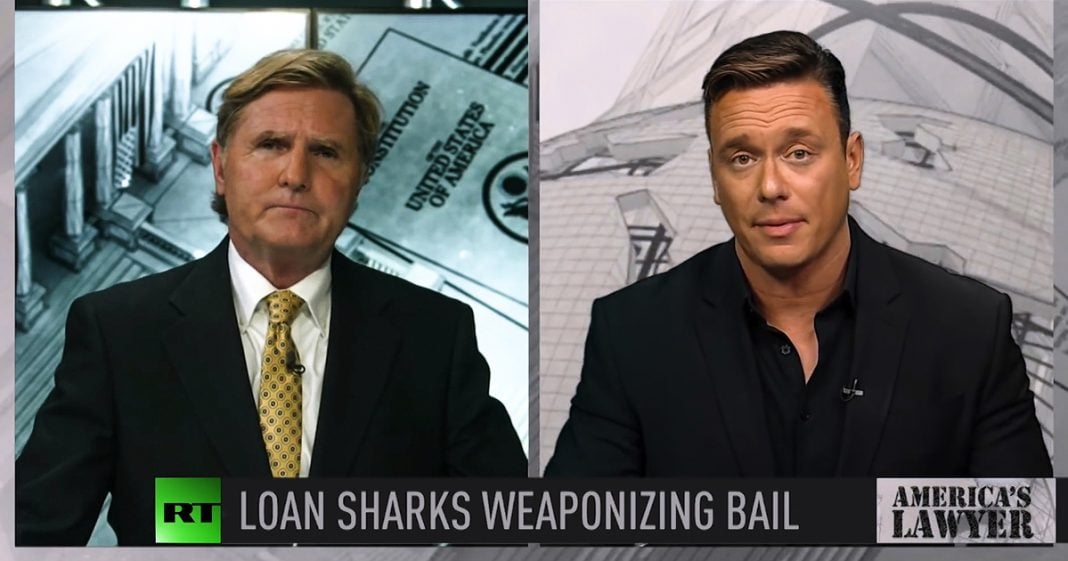 Via America’s Lawyer: Investigative journalist Ben Swann joins Mike Papantonio to walk us through the sinister cycle of predatory lending. Sky high-interest payday lenders are now seeking arrest warrants to FORCE desperate borrows to either pony up or go to jail. They’re often left with no choice but to take out ANOTHER short-term loan to pay bail, further deepening their debts.

Mike Papantonio:             The unfortunate reality is it’s often tough for lower income households to make ends meet leading many Americans to seek high interest payday loans to cover their monthly bills. But there’s something sinister going on in small claims court, which you’re seeing unusually high traffic from collection agency who seek arrest warrants as a means of forcing borrowers to pony up. Investigative journalist, Ben Swann, joins me now to walk us through all that. First of all, Ben, this is a story that’s been alive a long time. For some reason our brain dead Congress refuses to act on it. There are no regulations that that say, hey you, you know what? You can’t charge 625% interest rates, which is what these folks are doing. You can’t do that because it’s contrary to the way we do business in a democracy. What’s your take on this story?

Ben Swann:                           Yeah, absolutely. Well, first of all, it is a tragic story in a lot of ways, for really, for a lot of families across this country who struggle with these loans. So, you know, when someone is in a very tough financial position, they’re trying to make rent, they’re trying to, you know, pay for a new car that they need because their family is expanding and they’ve got to get to work, that many times they’ll take out these payday loans or these title loans. And as you said, sometimes these interest rates are as high as 600% APR. The average, the average across the country, Mike, is 390%. That’s the average across the country. So it’s an incredible amount of money that people are having to pay. But what is really alarming about this, it goes back to what you said here at the beginning, which is the weaponization of small claims court to actually create a debtor’s prison, prison system, which is really illegal in this country, to have debtor’s prisons. To create that system through really the abuse of the court system and the abuse of the bench warrant system.

Mike Papantonio:             Okay. So 1833 we had enough sense to say, you know what, something called due process, equal protection. We’re going to do away with debtor’s prison, but it’s back. And the loan folks, this really, you know where the center of gravity is, is in Utah.

Mike Papantonio:             So in Utah, they’re pushing the limits on virtually everything. And one thing they’re pushing the limits on is they’re using the court system to get people who owe money arrested. And then once they’re arrested, that person who owes money has to post a bond. When they post the bond, then the lender gets to come in and take the money from the bond while that person spends days or weeks in prison, in jail. So it’s contrary to everything that we believe. How, how widespread is this right now, Ben, what’s going on nationally with this?

Ben Swann:                           Yeah. So, and again, this, what’s happening in Utah maybe as a microcosm of what’s happening in other places as well. You’re right, it is probably the worst place, but it is a web of corruption. And the way it works, just so folks understand, is that because as you said, we don’t have debtor’s prison. You cannot send someone to prison for not paying back a loan. That’s not what they’re doing here. What they do is essentially they go to court and, and essentially ask the court to issue a bench warrant for someone who owes us money so that that person is compelled to come to court and then to settle this agreement or work out a payment plan. And because many of these people don’t get the notice, they might not see it. They’re working and they can’t take off work to do this, because they don’t show up for court,

Ben Swann:                           now a warrant is issued for their arrest and many times they’ll go to jail for this. Or as you said, they’ll have to pay this bond. And so, you know, the, in Utah, these lenders will set up a kiosk at the local County courthouse. They’ll sit there and when people come in, instead of seeing a judge, they have to go and talk to essentially the plaintiff in the case first and try to work out a settlement with them. And then the plaintiff, once they leave, goes and sits before the judge and says, please issue a warrant for this person, this person, this person. So what we’re seeing here is that really an incredible abuse of the court system in the state of Utah. 60% of all the small claims cases going before judges are brought by payday lenders. I mean, think about that, Mike. 60% come from payday lenders.

Mike Papantonio:             Let’s talk about the human side of this. So what we have is people that, that already having a tough time. Their, you know, their jobs not paying enough, they’re having to get a loan so they can pay their mortgage or pay for a car loan, whatever it might be. But the, what happens is the lender counts on that person not responding to a court summons.

Mike Papantonio:             And there’s a lot of ways that that happens. They might have, they might have jobs they have to take care of. Maybe they’ve moved, maybe they have children. You know, they’ve got to take care of children. There’s all kinds of issues that we understand affects, affect part of our population in a way that doesn’t affect everybody. But when you’re, when you’re living at the margins and you’re, you get a summons, well, okay, hopefully you can get there. But what ends up happening is if you don’t, the lending company then jumps all over that you then have a criminal bench warrant issued and then you’re, then you’re in big trouble. I don’t see this ever turning around, it’s certainly not going to turn around under Trump. It didn’t turn around under Obama. It just seems like this is just a new way of life in America. What do you think?

Ben Swann:                           Well, I, unfortunately it seems to be. What’s really tragic about this is that Trump, of course, campaigns as a, as a champion of, of, you know, the, the, the forgotten people, if you will. And yet certainly he’s not acting like that, in any manner, and certainly not in this manner. Look, the Obama administration had an opportunity to, to renew and revise a lot of these policies and to say, hey, let’s, let’s cap what payday lenders can demand and ask for. But none of those rules have gone into effect. The Trump administration has not put any of those rules into effect. And so really the, the people who are losing out here, Mike, and this is what I know you know, and it’s so important for your viewers to understand, the people losing out here are really people on the margins of society who have so little to lose because they are struggling just to survive.

Ben Swann:                           We live in an economy right now where it’s very difficult for people to survive on one job or one paycheck. Many times people will lose those jobs and so they’re left in this position where yes, they’ve borrowed money and, and done it at a high interest rate. And in some cases they’ll do it, keeping this in mind too, to protect themselves from overdrafting. Now, when you say, well, wouldn’t it be better just to get an overdraft fee? But when you think about that, if you have $100 and you overdraft on that and get a $35 overdraft fee, the APR on that is over 12000%.

Mike Papantonio:             Yeah. So, we’re living in a world where a lender can charge 652% and get away with it and say, that’s a normal course of business today in America. Ben, thanks for joining me. Okay.