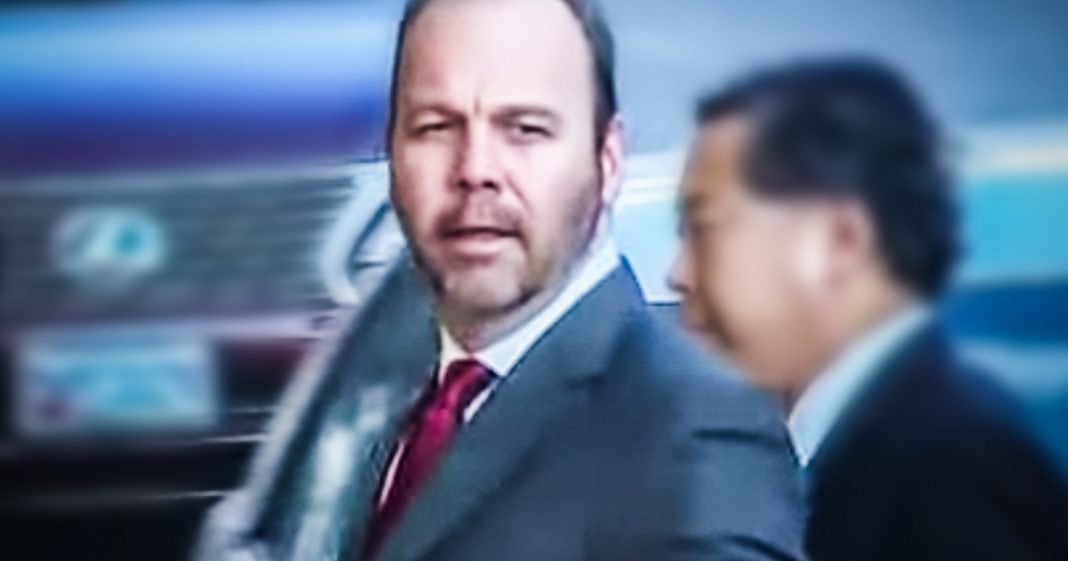 According to court filings, former Trump campaign chairman Rick Gates was offered “financial compensation” if he refused to cooperate with federal investigations and to obstruct the Mueller probe. While it is not yet clear who offered this cash to Gates, he is the one who flipped on Paul Manafort and helped secure that conviction, so Manafort could easily be the culprit. Ring of Fire’s Farron Cousins discusses this.

*This transcript was generated by a third-party transcription software company, so please excuse any typos.
Earlier this week in a federal court, federal prosecutors argued that Rick Gates, Donald Trump’s former deputy campaign chairman should not be given an actual prison sentence for the, uh, alleged tax fraud and fraud against the government and lying to the department of justice. Uh, instead he should just be given probation. And the reason that the prosecutors in this case are arguing for a much reduced sentence is because of all the, of all the help that Mr. Gates has given them. They have said that Mr. Gates flipped on Paul Manafort. Basically, his cooperation was what allowed us to convict Paul Manafort and recover all that money that more than paid for the Mueller investigation. He gave us information on Roger Stone who is now headed to jail. He gave us information on Greg Craig. This guy has given us so much and allowed us to move forward with so many different convictions. Oh, and by the way, he was also offered financial assistance if he agreed to obstruct the Muller probe and being the fine upstanding citizen that he is. Mr. Gates did not accept that money to which the rest of the world just said, wait, hold up. What somebody offered Rick Gates money if he didn’t cooperate and instead obstructed the Muller probe kind of burying the lead there, federal prosecutors. Now unfortunately in this filing in this federal court in the Rick Gates case who is still by the way, waiting since I think, um, they didn’t say who offered Rick Gates the money to not cooperate. And to me that kind of seems like something we need to know because if it’s one of the people who have already been prosecuted, we need to prosecute them again because that is a prosecutable offense. If it’s somebody who has not yet been prosecuted, then maybe we ought to go ahead and file some charges against that person too. You can’t just make a claim like this that, Oh, by the way, somebody who was being investigated, which literally could be anybody from Donald Trump to Roger Stone to Manafort himself offered to give Rick Gates money if he obstructed the Mueller probe, that’s a big deal. Those are the kinds of things that you need to expand a little bit and explain better to the American public. We need to know who in this little conspiracy was trying to pay off Gates to prevent him from flipping on all of Donald Trump’s friends. Now. I think it’s unlikely that it was Donald Trump himself who offered to give Rick Gates money. I just don’t think that that’s how that works. Although now that you kind of think about it, Donald Trump is the one who threw money at Stormy Daniels to keep her quiet. He did throw money into Karen McDougal to keep her quiet. He loves to throw money at people to keep them quiet, but I am sure, right. The president of United States, obviously knowing that this is illegal, totally wouldn’t have done that. And besides, if it had been him that did it, wouldn’t that have come out in the Mueller report? Right? You would think you’d hope maybe. Possibly a little bit. No, but anyway, seriously, I don’t think it was Donald Trump who did this, but wouldn’t surprise me if it was a guy like Manafort. Manafort had tens of millions of dollars. Very easy for him to go up to his friend and say, listen, keep your mouth shut. Don’t tell him anything. Give them false leads if you have to, and I’ll take care of you and your family. So likely Manafort, possibly Roger Stone, maybe even Greg Craig or possibly somebody else who was worried that Rick Gates knew too much. As it stands right now, we don’t know, but I can guarantee you as this story drags on, eventually Rick Gates is going to talk and he’s going to tell us exactly who and how much he was promised to obstruct this probe.