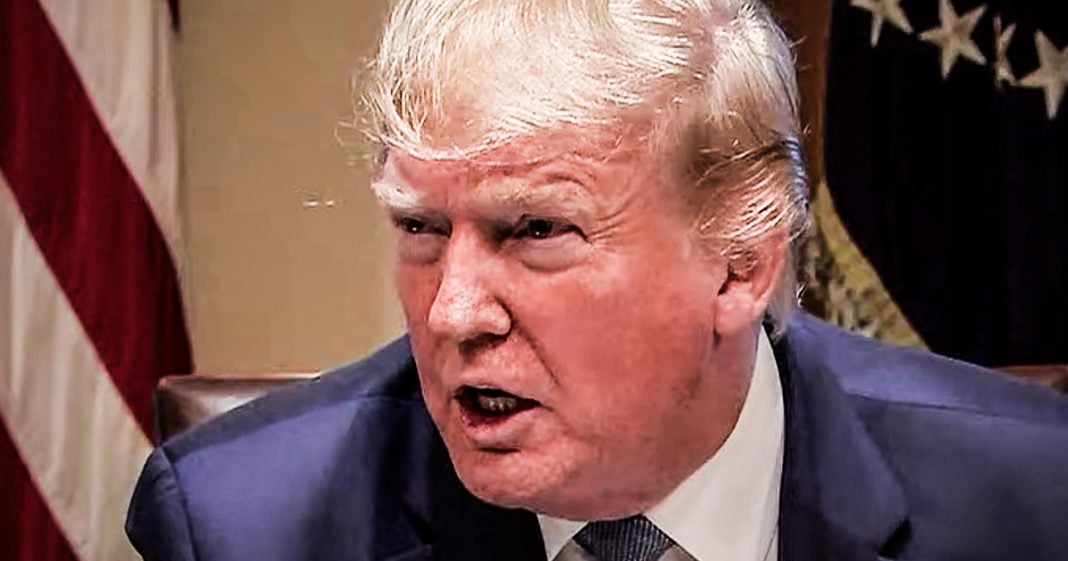 Donald Trump claims that he has a great relationship with North Korean dictator Kim Jong Un, but he is constantly being mocked by Kim. This week, a North Korean official called Trump an “erratic old man” after the President went into another one of his Twitter tirades. North Korea clearly has no interest in working with Donald Trump, but they sure know how to play him. Ring of Fire’s Farron Cousins discusses this.

*This transcript was generated by a third-party transcription software company, so please excuse any typos.
Last Sunday, Donald Trump tweeted out some praise and a bit of a warning for North Korean dictator Kim Jong Un. Donald Trump tweeted out the following. He said, Kim Jong Un is too smart and as far too much to lose everything actually if he acts in a hostile way. North Korea under the leadership of Kim Jong Un has tremendous economic potential, but it must denuclearize as promised. In this little half compliment half threat thing that Donald Trump tweeted out, didn’t sit too well with leadership over in North Korea if you can imagine. And so you had North Korean, a former nuclear negotiator, Kim Young Chael who said the following as Trump is such a heedless and a radical man, the time when we cannot, but call him a doe-tared again may come. Trump has too many things that he does not know about North Korea. We have nothing more to lose though the US may take away anything more from us. It can never remove the strong sense of self respect, might, and resentment against the US from us. Now, does that sound like the statement of the kind of guy we ought to be over there working with in North Korea? Look, I admit that Trump’s statement was, was horrible and stupid, and he does heap far too much praise on murderous dictators. Not just Kim Jong Un, but anyone he can find around the planet. He loves him, but wow, this dude, Kim Yong Chol, he’s pissed, but he also laid out a very interesting point there. We have nothing more to lose. See Donald Trump, and I actually think a lot of leaders on both sides of the aisle end up making this mistake in their negotiations. They think, listen, if you don’t do what we say, we’re going to make things bad for you. Well, guess what? 99% of people in North Korea, it’s already bad. And that’s what he’s saying, like, we got nothing more to lose, man. What are you going to do? What are you going to do? Things can’t get any worse for us. And the reason the leadership in countries like that, just like in China with these trade deals, the reason they don’t care is because they’re going to be fine regardless. They’re living in their little ivory towers while they’re starving their own country to death. They don’t care because they’re not affected. The people who are affected are at the point where they’re just like, screw it. We got nothing else to lose. Go ahead and be a weirdo on Twitter. Go ahead and insult our leadership. It’s not gonna make things any worse for us. And that’s why we always end up in these stalemates. It’s why we’re at a stalemate with North Korea on denuclearization. It’s why we’re at a stalemate with China, with the, uh, the trade deal. And I’m not saying China’s a dictatorship, but obviously you look at the conditions of most of the people living in China. The leadership doesn’t care about them. They don’t care if they get hurt by a trade war because the leadership’s going to be fine. Just like in North Korea, the people in Kim Jong Un’s palace, the people in his, a little administration, if you want to call it that, they’re okay. They’re not hurting for anything. Everyone else in the country, not so much, but they don’t care because if they did, those people wouldn’t be living in those situations to begin with. Trump has failed. He is not an expert negotiator. He has given North Korea everything that they have asked for and gotten absolutely nothing in return, and so he is resorting to begging them on Twitter to do what they allegedly promised to do. Even though all of us looking at this objectively before it even started told him, it ain’t ever going to happen because you’re trying to negotiate with a bad faith actor. This is exactly what every administration that came before Trump went through. None of them were successful because North Korea has no intention of denuclearizing because if they do, they lose the one thing that they have that is keeping them from being destroyed by another country.