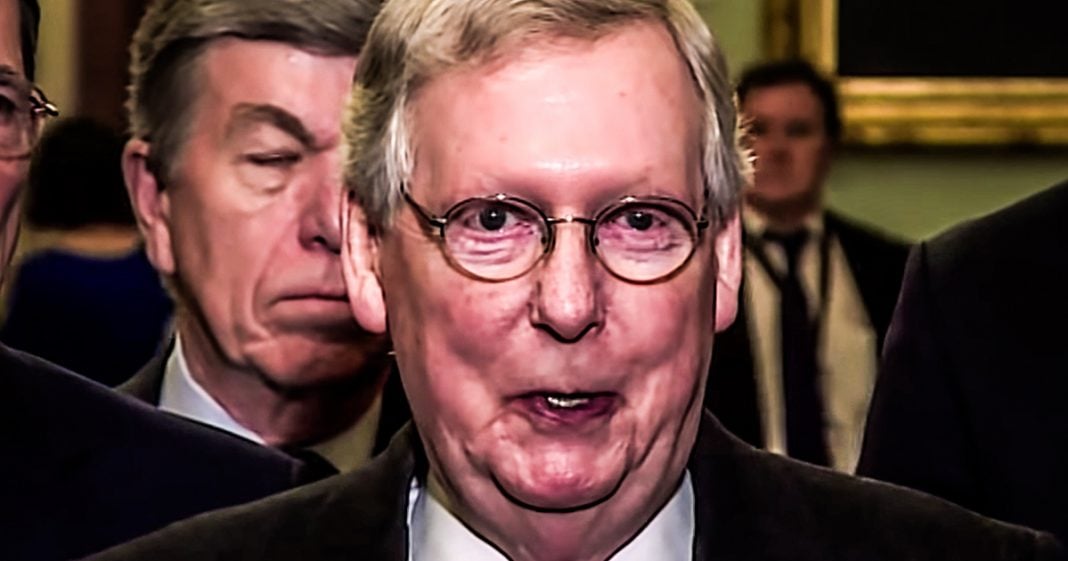 Democrats from all walks of life – from politicians to pundits to the public – are demanding that Mitch McConnell stop lying about Democrats doing nothing and actually start passing the bills that the House has sent to him. McConnell is gaslighting the public with his claims that Democrats are too wrapped up in impeachment to do anything else, as he sits with more than 200 House bills on his desk ready for debate. Ring of Fire’s Farron Cousins discusses this.

*This transcript was generated by a third-party transcription software company, so please excuse any typos.
Earlier this week, Mitch McConnell accused the Democrats of dragging their heels and being so obsessed with impeachment that they can’t seem to get anything done in the U S house of representatives. Now, those are pretty strong words, right? Coming from the, uh, Republican Senate majority leader, I mean, wow. Mitch McConnell sitting here saying, Democrats do your job basically repeating the same talking points that Donald Trump has been throwing out for months, that Democrats in the house are incapable of doing anything because they’re so focused on removing Trump from office. Well, nearly immediately after Mitch McConnell made these comments, he was attacked on all fronts by all sorts of Democrats. Left right, center, progressives, liberals, whatever you call yourselves on the democratic side, everybody for a brief and beautiful moment joined forces to point out what a lying jackass Mitch McConnell truly is from pundits to politicians to the public. Everybody understood that Mitch McConnell was gaslighting the American public, and here’s why. Right now at this very second, there are roughly 275 pieces of legislation that have passed the house of representatives that are now sitting on Mitch McConnell’s desk. Not a single one of them has even been brought up for debate. They haven’t considered any of those 275 plus bills sitting on McConnell’s desk and he has the audacity to sit out there and lie to every one of us saying the Democrats are the ones who can’t do anything. Now the Democrats have actually been fairly remarkable in their ability to both impeach the president of the United States and still do their regular jobs. Now, I know earlier this week, obviously when they said here’s our two articles of impeachment, also we’re giving president, uh, his trade deal that he wants that’s going to benefit corporations. That was stupid. That was one of those times where they shouldn’t have done two things at once. But the bills sitting on Mitch McConnell’s desk address, everything from gun control, climate change, drug pricing, healthcare, everything you could imagine. But as McConnell told us, what was it about a year ago, he is the grim Reaper of progressive policies. He is the grim Reaper of liberal legislation, and he is certainly living up to that name. And it’s one thing if he doesn’t want to do his job, if he doesn’t want to bring these bills up for even a discussion. But it’s another to sit there and lie to the public saying that the people on the other side are the ones who aren’t doing anything. The only thing Mitch McConnell has done for the past few months is approve more and more and more unqualified judges put forward by Donald Trump. So Republicans can control the courts for another few generations. But when it comes to actually passing legislation, doing something that could help the American public, Mitch McConnell’s more than happy to put his feet up on his desk on top of that massive stack of legislation that the Democrats have already passed.