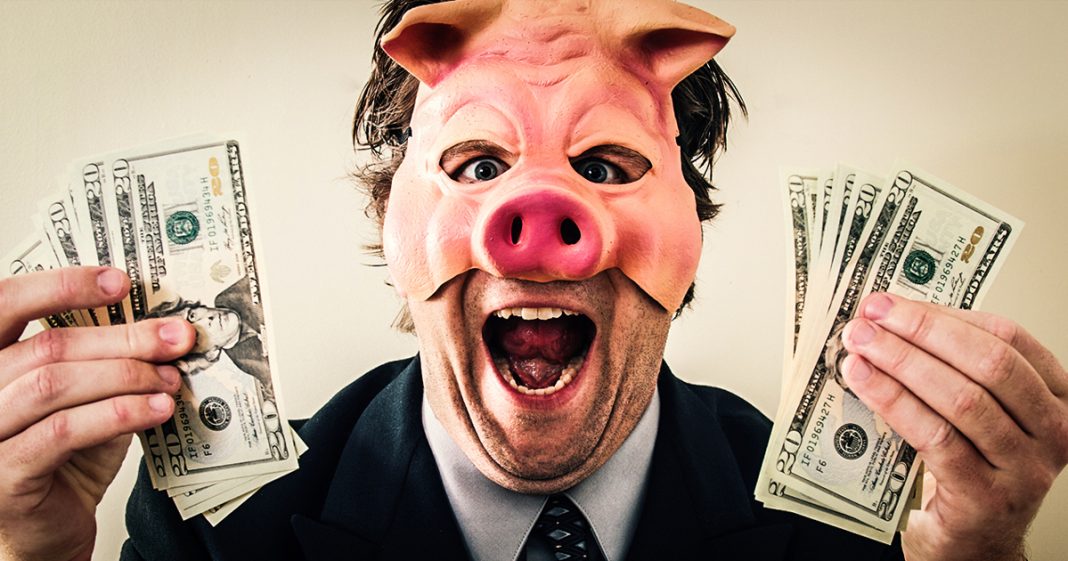 Two years ago the media was fawning all over companies who were paying out bonuses to workers as a result of the GOP tax cuts. But those bonuses came with strings attached, and few workers actually got them, but the press did a poor job of following up on that. We were also promised massive job increases by companies who got the tax cuts, only for them to cut jobs and pocket the money. Ring of Fire’s Farron Cousins explains how we were lied to and what we can do about it.

*This transcript was generated by a third-party transcription software company, so please excuse any typos.
Well folks, it’s now been two years since the Republican party passed their GOP tax scam, and if you’ll remember back two years ago, right around this time, right before the Christmas holiday, you had all these major corporations handing out those little bonuses to their employees because they were about to get this big tax cut. They were out there doing media interviews, sending out press releases saying we’re giving thousands and thousands of dollars to our workers, and on top of that, once we get this tax cut kicking in here, we’re not just giving people more money through bonuses and raises. We’re also expanding our operations. We’re going to be hiring thousands of new people in the next couple of years. Been a couple of years now, where’s the jobs? Where’s the bonuses? Where’s the raises? Y’all got your tax cuts, you saved billions of dollars per year and you didn’t do anything, and let’s also not forget the fact that most of those bonuses, as we discussed at the time, most people that worked for these companies who promised them didn’t actually qualify for them. You know the people working at Walmart, the people working at AT&T after these companies said, we’re giving you thousands of dollars. What the media didn’t talk about was the little asterisk at the end of that statement that said, if you’ve been here more than a decade, and if you currently make between this and this, and if you’re an employee in good standing and haven’t had any kind of, you know, black marks on your record and yada yada, yada, kind of like Kamila Harris’s debt forgiveness plan for college students, you gotta meet X,Y,Z, one, two, three, four, five criteria. And then maybe we’ll give you a little something. And then again, as we reported a few months later, corporation said, yeah, we’re not actually gonna raise wages and we’re not going to do those bonus things again. That was, that was kind of a onetime deal, cause they already got all the good PR from it. Two years ago the media was fawning all over them saying, look at this folks, the tax cuts are going to work. You’re getting more money in your pocket right now. They, they failed to do the followups that said, oops, no you didn’t. But okay, so we didn’t get more money from it as both corporations and Republicans promises. I think Trump and Paul Ryan said we’d get about nine grand a year. We didn’t, uh, but at least the jobs, right? I mean, we look at the job reports, the jobs came, didn’t, didn’t they? Nope. As tech dirt pointed out, one of the biggest offenders of this was AT&T because you had AT&T CEO Randall Stephenson at the time who came out and said, Hey, we’re going to get this huge tax break and you know what we’re going to do? We’re going to invest it back in our company. We’re going to invest billions back in our company and for every billion we invest, that’s going to be about 7,000 new jobs created and well, okay, your tax break, the tax refunds you got now is 3 billion a year. So that would be 6 billion over the last two years. So if my quick math is correct, that should be 42,000 new jobs. Did AT&T create 42,000 new jobs? No. No they didn’t. They cut jobs and they also just announced that even though they’re still hugely profitable, making billions of dollars, still getting 3 billion a year from the tax break, um, they’re going to start laying people off again, again for about the third time in two years, there’s another round of massive layoffs coming because they’ve decided they’re not going to be reinvesting the money back into their company. So it’s been two years, folks. We didn’t get tax cuts, we didn’t get raises, we didn’t get bonuses and we didn’t get the jobs. By every possible measure, every single thing republicans and corporations told us what happened from their tax cuts didn’t happen. Every bit of it was a lie. We know that. We talked about it before. The thing even passed. It was going to be a lie. We covered each and every one of these stories over the last two years as they developed. So why am I bringing up things that I have said a thousand times before? Because Republicans are still out there today claiming their tax cut worked, claiming the economy is better than ever. Trump said yesterday, yesterday that this is the greatest us economy in the history of the United States. We’re getting screwed. corporations, the top 1%, they’ve got everything and things are only getting better for them. And sure, if you’re only looking out from your ivory tower and you can only see the top 1%, I imagine things do look better than ever. But maybe next time you’re up on that tower, try looking down. Try looking down at the rest of us because we’re suffering and we’re struggling. And the only way to overcome this is to vote Republicans out of office for good.