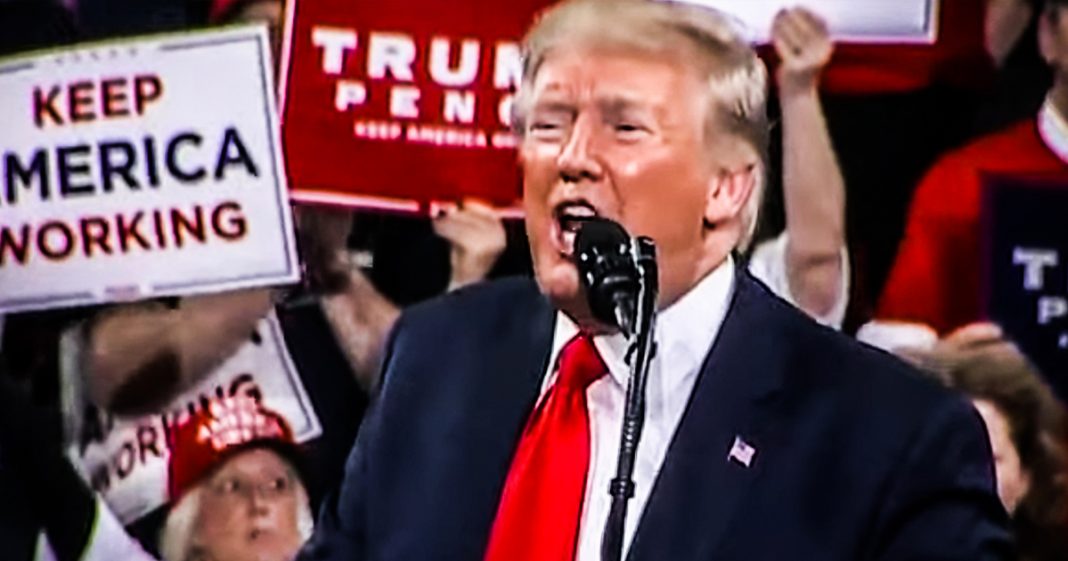 According to reports, Donald Trump has been talking with his advisers about the possibility of simply skipping the 2020 presidential debates. He claims that the media won’t be fair to him, but the truth is that he’s terrified of the thought of going up against anyone who is going to call out his lies and his pathetic record as President. Ring of Fire’s Farron Cousins discusses this.

*This transcript was generated by a third-party transcription software company, so please excuse any typos.
There is no question that Donald Trump has a very weak and cowardly individual, but sometimes we forget just how cowardly he really is until a story comes along and reminds us that this man is one of the most terrified human beings in the United States today and the latest story to come along to remind us of that is the story that’s out now, saying that Donald Trump has actually been talking to his advisors about the possibility of skipping the 2020 presidential debates. We may, for the first time in modern history, have a presidential candidate who refuses to participate in those three presidential debates that happen in the months prior to the election. And the reason Trump says he’s not so sure he wants to do it is because he doesn’t know if he can trust the uh nonpartisan nonprofit presidential debate committee. To be fair to him and maybe they’re going to pick some moderators that aren’t going to be nice to him and Oh my God, what’s going to happen if he goes up there and they ask a question and he thinks it’s a little mean and that according to the stories, is why Trump is thinking, maybe I’m not going to participate in these debates. Here’s the thing, Trump’s real fear is that any moderator left, right center, whatever it is, is going to call him on his horrible record as president. They’re going to ask him about the trade war. They’re gonna ask him about farm bankruptcies. They’re going to ask him about the economy that he says is doing so great. Yet 53 million Americans are working jobs that don’t pay a living wage. They’re going to ask questions that he doesn’t want to answer because they don’t jive with his alternative reality that he has created for himself. I think it honestly has less to do with whoever’s going to be on the other side of that debate stage from him than his innate fear of having to answer for his actions. That’s what this is about. He doesn’t know how he’ll react. His advisors don’t know how he’ll react if he gets asked one of those tough questions and that’s where things get a little scary. However, don’t worry about this. I don’t think Donald Trump has enough courage to actually sit out the presidential debates because it’s a lose lose situation for him either. He goes to the debates, he gets asked these tough questions eventually. I mean there’s a good chance we’ll get some moderators that won’t ask him, but as opponent, regardless of who it is, is likely to bring up some of these things. So he’s going to have to do that and he’s going to fall flat on his face and that’s going to be very bad for him. Or he could completely sit out the debate and go through the next several months of hearing from the press what a coward he is. This is a scenario in which the president can not win, but leave it to the Republicans. Cause I can promise you, no matter what happens, if he shows up at the debates, if he falls on his face, if he attacks somebody, even if he attacks him physically or if he just decides to sit it all out, the Republicans are going to spin it as a massive victory for the president. And based on what we’ve seen so far in polling data about Trump’s entire presidency, half the country at least, is probably going to believe him.