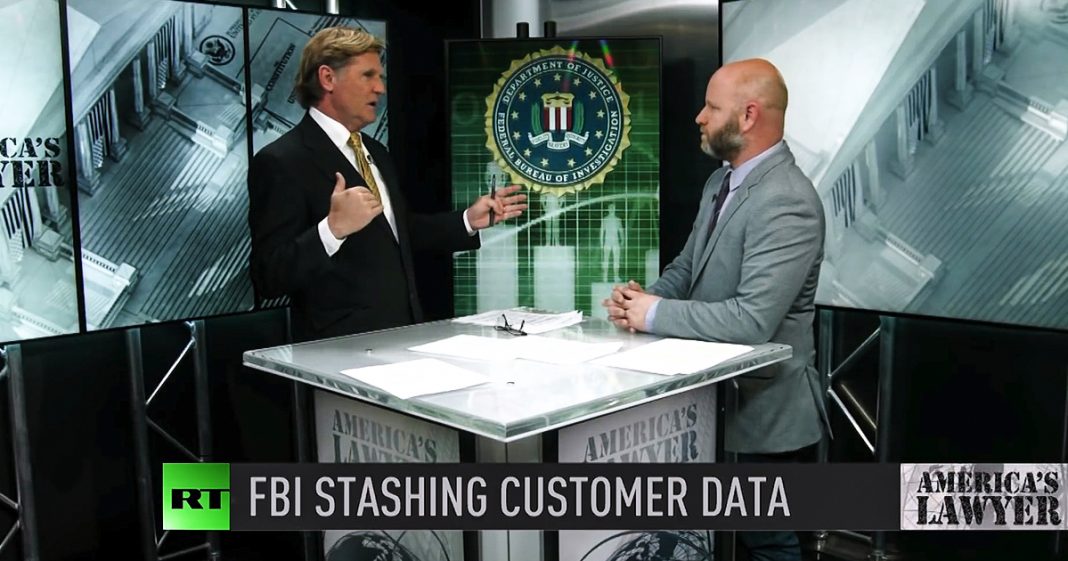 Via America’s Lawyer: The FBI has been working with corporations to get their hands on your personal data in order to create profiles of American citizens. Mike Papantonio and Farron Cousins discuss.

Mike Papantonio:             The FBI has been working with corporations to get their hands on your personal data in order to create profiles of American citizens.

Farron Cousins:                  So this specific, specific story, what we found out here is that for, for years and years, the FBI has been going up to corporations, Facebook, Google, AT&T, Verizon, the whole, the usual suspects. And what they do is they go up to the corporation and say, hey, we need information. Everything that you have on John Smith. We need addresses, we need phone numbers, we need IP addresses, we need everything about this guy. We don’t have a warrant because we don’t need a warrant. Give us the info. And by the way, after you give us the info, you have to sign this gag order saying that you’re not going to tell John Smith that we, the FBI.

Farron Cousins:                  Until of course, as this article pointed out, eventually these, these gag orders do eventually expire. And then at that point the corporation can decide, well, should we tell John Smith that this happened, that the FBI is watching him or should we just let it go? And most of the time the companies just say, we’re not going to tell the people that the FBI is spying on them.

Mike Papantonio:             Okay. Let me back up on this story just a little bit. I don’t think there’s anybody, Farron, that has done more of these stories about, you know, whether it’s AT&T, Verizon, Google, that has been spying on us for a long time. Not only spying on us, but overtly working with the spook industry.

Mike Papantonio:             And that’s not just, they’re spying on us, they’re taking orders from the spook industry to spy on us. Okay. Now, if you’ll recall, the church hearings that took place, Frank Church brought hearings and said, look, there has to be a limitation on the involvement of the spook industry in our lives. Because the spook industry, the NSA, FBI, CIA, they were so active during that period of the Church hearings that they were actually targeting journalists, Seymour Hersh. Seymour Hersh, whether it was true or not, he came out and said, look, they tried to kill me and story after story was emerging in the Church hearings about how bad it had gotten. Seems like we’ve forgotten it. We have NSA and FBI have worked with Apple to access customers. Go ahead. What are some of the other stories? It’s unbelievable.

Farron Cousins:                  We have obviously AT&T, Verizon, all the big mobile carriers have been working with the FBI and NSA since the Patriot Act was passed. I mean, in the very early days of that they jumped up and said, listen, we’re here to work with you. We have call logs, we have records and data and location services. You tell us what you want, we’re going to give it to you and in exchange, these companies get massive government contracts. Same thing has happened with Google who is also working with the NSA. Same thing has happened with Facebook and Amazon because they work with the FBI. It’s across the board and it’s not just limited to, this isn’t something that just happened. You know, you pointed out the Church hearings, there is also evidence going back to, you know, the Civil War of the government using private companies.

Mike Papantonio:             To where they, and so, so what I’m trying to say is I realize they don’t teach civics in class anymore because everything in class right now is need to know. You got to pass a test. They don’t teach civics, they don’t teach, you know, they don’t teach why this is important. So the average millennial American right now says, ah, you know, I’m not doing anything wrong. Why should I worry about any of this? But when, if you’ll go back, if anybody watching this broadcast will go back and look at how involved the spook industry was in the lives of Americans during the Nixon years where they were going out and literally targeting, well, they targeted Martin Luther King. They targeted the Kennedys. They targeted, targeted Malcolm X. You had, you had J Edgar Hoover, this weird bird who used to dress up like Shirley Temple at night, lived with his mother at night, and during the day he turns into this draconian character that is spying on all of America. And so, you know, we have to reevaluate. Those Church hearings were important and they’re still relevant today, aren’t they?

Farron Cousins:                  Right. And the people need to understand this never stopped. You know, the Church hearings, as great as they were at exposing all of this, it didn’t put an end to it. It just let us know it was happening. Edward Snowden’s revelations, when he came out with all this info, that doesn’t mean it stopped. It just means now we know about it. And of course the public has an attention span of about five minutes. They forget, your being spied on right now. If you’re on social media, if you’re on Google, anything, they’ve got your name.

Mike Papantonio:             They absolutely do. Farron Cousins, thank you for joining me. This is, I want to pick up on the Saudi Arabia story next week. We’re going to learn a lot more. It’s going to get a lot uglier, I’m sure.