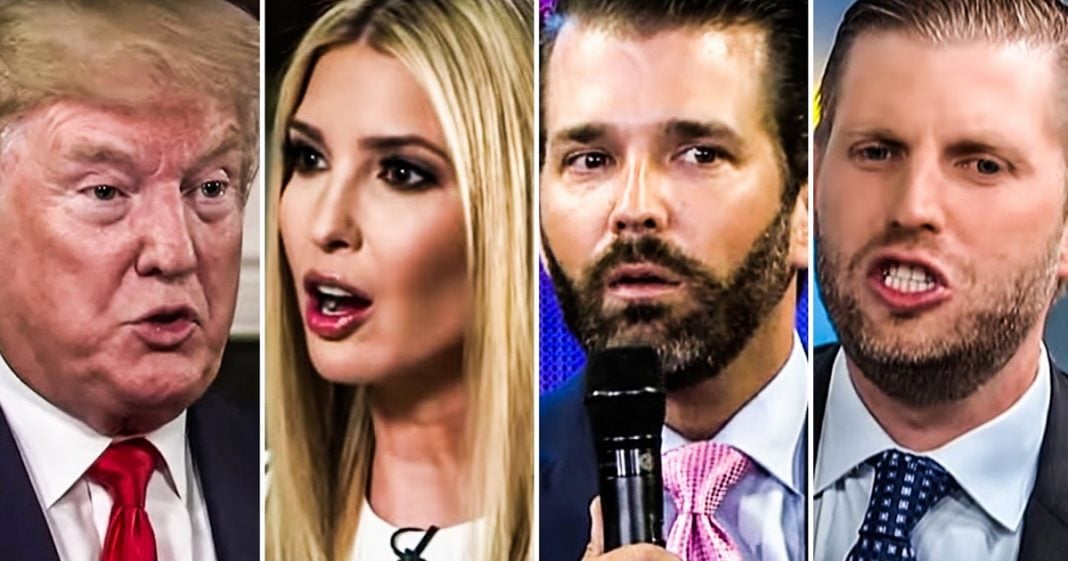 As part of a settlement agreement over the misuse of charitable funds, Trump’s kids Don Jr., Ivanka, and Eric are being forced to take a course on how not to defraud a charity. Imagine being so corrupt that a judge actually orders you to take classes on how to NOT be corrupt. Sadly, that’s the world we’re living in with the current leader of the United States and his family. Ring of Fire’s Farron Cousins discusses this.

*This transcript was generated by a third-party transcription software company, so please excuse any typos.
As part of the settlement with the New York state attorney General’s office, Donald Trump’s three children, Don Jr, Ivanka, and Eric have all now been ordered to take a special class to teach them how to not defraud a charity. That’s how corrupt these three little monsters that the president birthed or spawned, excuse me, are. They are so corrupt that the attorney General’s office said, you have to take a class to teach you to not be corrupt, to not steal charitable funds. That’s what’s happening here with part of this settlement agreement. Now, we also know that they had to pay out $2 million, which Donald Trump did shell out in the form of a quarter million dollars to eight different charities. They’re also no longer allowed to operate as a charity because they were using the charitable funds to pay for personal things for the Trump organization, the Trump campaign, and occasionally just for Donald Trump and self, including spending more than $10,000 on a painting of Trump to hang it Mar-a-Lago. They also paid some legal bills the president was having some trouble with. And of course, they also, uh, benefited his presidential campaign by paying off charities after they came out in support of him. But we all knew that part of the story, right? To me, the bigger thing is obviously the fact that his children are so corrupt, they now have to take anticorruption courses. And I think that’s what we need to focus on. I mean, here we have a president who right now is attacking Hunter Biden as being a wholly corrupt individual. Trump’s kids have attacked ah hunt- Hunter Biden as being this horribly corrupt and incompetent individual. And yet Hunter Biden hasn’t been ordered by a judge to take a special class to learn to not steal from people. Donald jr now has, Ivanka now has an Eric now has, so really, whose children are worse, the guy who got a job that he’s really not qualified for and paid a lot of money for, or the three who defrauded a charity, defrauded their donors, and are now being ordered by an attorney General’s office to take special classes so they can learn how to not be such horrible, miserable, thieving human beings.