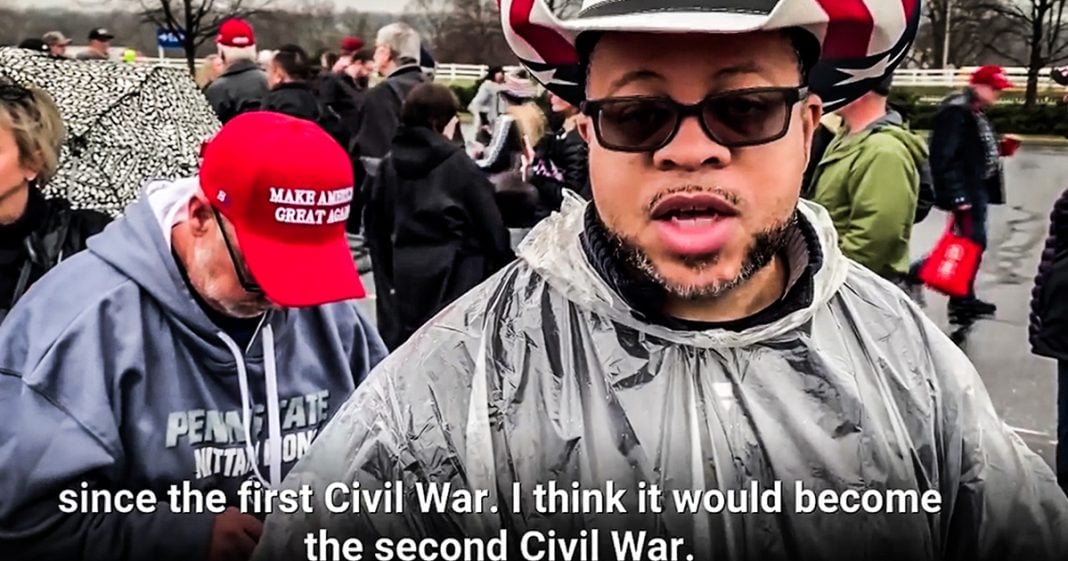 Donald Trump held a rally in Pennsylvania earlier this week, and prior to the start of it, CBS News interviewed several Trump supporters to get their thoughts about impeachment, and their answers were nothing short of insane. They threatened violence, and one even suggested that his removal from office could trigger a second Civil War. Ring of Fire’s Farron Cousins discusses this.

Earlier this week, Donald Trump gave a rally in Hershey, Pennsylvania and CBS news decided to catch up with some Trump supporters prior to that rally and asked them what they thought about impeachment and their responses are about as predictable as you would expect. Here’s a couple,
[well, he’s not going to be removed. He’s not going to be removed. He’s not going to be removed. You feel confident in that. My, my 357 Magnum is comfortable with that end of story. And then they remove them in the Senate. I think it would cause physical violence in this country that we haven’t seen since the 70s I think it will become the second civil war. I would think that there would be a strong movement would be very negative. Possible violence, not that I am condoning violence. There’ll be a lot of mad Americans.]
So according to these three different Donald Trump supporters, if he is impeached and removed from office, it’s either going to result in that one guy, the first guy in the video starting to shoot people because that’s what he hinted at, which right there, that’s a red flag and that guy should be stripped of his firearms cause he just threatened to kill people if Donald Trump was removed from office. So he’s a dangerous nut. Uh, the second guy says it’s going to be the uh second civil war. So that’s pretty crazy. And then the third guy, little bit more well-spoken. In fact, if you want to watch his whole clip, uh, you can go to the link in the description. He actually, you know, kind of sounds like a sympathetic character at some points cause his daughters are liberal, but he is a conservative and Oh God, they just had something happen at Thanksgiving. He didn’t want to get into it. But he also wants again, says you’re going to have violence, you’re going to have millions of angry people out in the streets and it’s going to be total chaos if Donald Trump is impeached and removed from office. Now I thought it was very telling that in this clip and the extended clip from CBS news, um, all the people they talked to seem like the kind of people that you could probably push over with just one finger, right? None of them, like huge, really threatening type folk. The kind who said, we’re going to have a civil war. You might be like, Oh crap, I don’t want to piss you off. No, these are people who sit on their couch all day. Maybe they’ve got some guns like the one guy said and yeah, that’s pretty terrifying. But at the end of the day, they have those guns because they’re cowards because they’re afraid of everything because they’re afraid of their own shadow, and there is no way any of these people would have the courage to actually take to the streets if Donald Trump were removed from office. Now we have very little to worry about, right? Donald Trump is not going to be removed from office, and these people also know that. They know that the Republicans in the Senate going to protect him so they can make these idle threats. They can go ahead and issue their warnings about a second civil war because they know they’re never going to have to actually do it. But if it did come down to it, I don’t think any of these people would actually do it. They’d get online, they’d get on Facebook for the older folks, Twitter for the younger generation, and they’d complain. They’d piss and moan and they’d say horrible things about Democrats. Maybe you got one or two truly radical crazies out there who tried to do something bad, but there’s not going to be a second civil war and these people know that, but they want to come off as the big, tough macho mean guys. When in reality they look like scared and pathetic little cult members, which is exactly what they are. That’s what we’re dealing with on the other side with some of these Trump supporters, these people know they’re not going to do anything. They know deep down that the president broke the law. But to admit that would be to bring their whole alternative reality crashing down around them, and they’re not willing to do that. They’re happy in their little bubble and they don’t want anything to come along to pop it, which is exactly what Donald Trump’s impeachment could do. But again, at the end of all this, there’s nothing to worry about because as we know, Republicans in the Senate would never vote to remove Donald Trump from office. So all these terrified little maga man children out there. You can sleep easy tonight and go lock the gun away because you’re not going to need it. Nothing’s going to happen. Your world’s not going to change, and you get to go on being the terrified little scaredy cat that you are.