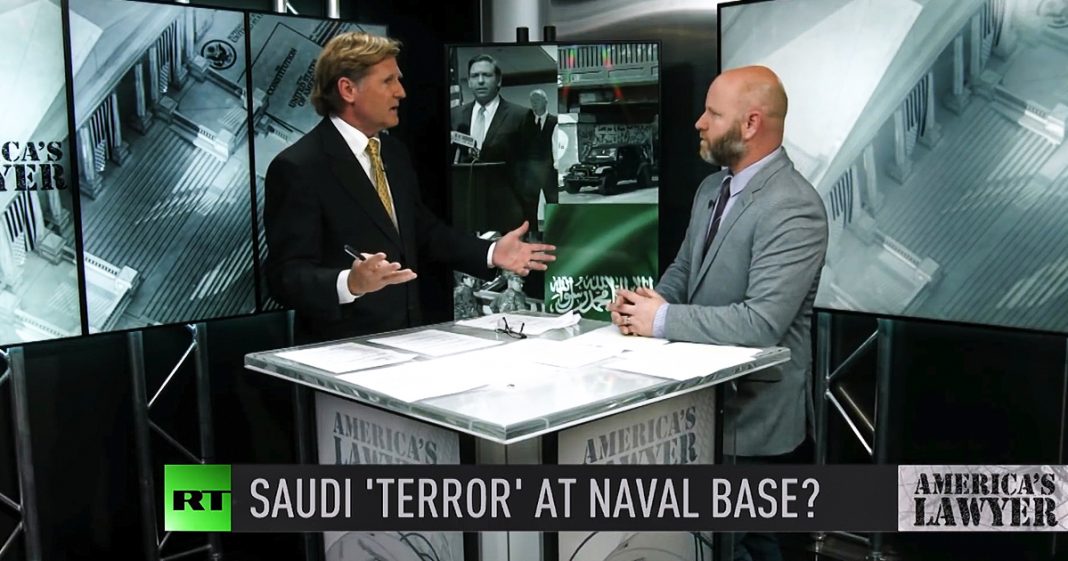 Via America’s Lawyer: Mike Papantonio and Trial Lawyer Magazine editor Farron Cousins talk about the recent mass shooting at a Pensacola Naval base, with the shooter identified as 21 year-old Mohammed Saeed Alshamrani of the Royal Saudi Air Force. While the FBI was quick to investigate the shooting as a possible act of terrorism, why does President Trump appear hesitant to link the Saudi national with any terror plot? With Saudi ties to 9/11, the war in Yemen, as well as the execution of Washington Post columnist Jamal Khashoggi, DOES the U.S. government turn a blind eye to its biggest customer of military weaponry?

Mike Papantonio:             Pensacola, Florida has been in the spotlight for all the wrong reasons in the past week after a Saudi Arabian national opened fire at the Pensacola Naval air station. This story’s developed into a terrorism case and I have Farron Cousins from trial lawyer magazine with me to tell us what’s happening. First of all, Farron, we’ve done this story at least a dozen times over the last 10 years. We have talked about this issue. There’s an elephant in the room and we’ve got to talk about it. Saudi Arabia and the Royal family is that elephant. We should’ve known 9/11. After 9/11, we learned that those terrorists that engaged in that and killing 3000 Americans, most of them were from the Saudi family or some connection to the Saudi family.

Farron Cousins:                  Right. And, and what we’re seeing develop right now is that once again, our relationship with Saudi Arabia just cost us more lives. I mean, this was three people on that military base, now dead, four including the shooter himself. But, this was somebody who’s been over here for two years. A member of the Saudi Arabian military. We agreed to say, yeah, come on over here. We’re going to give you all this Naval training, the flight training. You’re going to be our best friends. Several other nationals also came over with him and, and that’s where this story kind of gets a little weird because you also have these other Saudi Arabian nationals in this story, one of whom filmed the event on their cell phone. And, and for some reason they’re saying that, oh no, he was just a bystander filming this. Nothing, nothing adds up here. And it feels like, once again, like we’re trying as a country to kind of cover up for the Saudi Arabia.

Mike Papantonio:             We are. You remember 9/11, all of a sudden overnight, everybody related to the royal family disappears. Journalists have no idea how they left the country. They were flown out on government jets out of the country. This is a situation where we know this, the cars, the, the, the, the, the other folks involved, their cars were parked right next to each other. Car here was the shooter, car here was the guy that filming, car here was the guy filming. This wasn’t a mistake. I find it incredible that Trump comes out and starts parroting these defense lines that we’re hearing from the royal family. Look what you have there is a despot dictatorship.

Clearly a despot dictatorship. I just got back from the United Arab Emirates, Saudi Arabia is even worse in the, in the way that the King makes all the decisions. I can tell you this, everybody involved, if you do, if you do the math on this, you’re going to find everybody involved in some way had a connection to the royal family because they don’t come over here and train as pilots unless they have that kind of relationship. So we just have to call it what it is and what it is, where we’re, why, why can’t we make the move and say this is a terrorist state? I mean, they killed 3000 Americans.

Farron Cousins:                  Well the reason we can is because one, they’re the number one purchasers of weapons from the United States and number two, they’ve got a ton of oil that we want. I mean, literally, those are the two reasons. That’s why as a country, no matter who is in charge, if it’s a Republican or a Democrat, Saudi Arabia is always going to be our best friend because they spend a lot of money here and they give us the things we need. And we’re also finding out horror stories about what they’re doing with those weapons. A few weeks ago actually here on America’s Lawyer, we talked about the fact that you had these Saudi Arabian exchange students up in the Northwest accused of murder and they suddenly disappeared.

Mike Papantonio:             Okay. You have covered through the trial lawyer magazine, you’ve, you’ve written great stories about the relationship between the weapons industry. Now, let me, let me begin here. Why are they being trained in Pensacola, Florida on the most sophisticated weapons in the world? They’re being trained because the weapons industry sells the product to Saudi Arabia. And we as taxpayers have to say, you buy our product and you know what? We’re going to send you to the heart of the best teachers in the world to show you, show you how to use this weapon that is the most sophisticated weapon in the world.

Farron Cousins:                  Right. Absolutely. And that’s one of the reasons those Saudi Arabian nationals, the members of the military, we’re here to learn how to use this equipment that we’re turning around and selling them. So they can go back, they can help train other members of the military how to use these things, how to fly them. And this unfortunately is something that we’re not going to see change. What I have found very interesting is that you had Florida governor, Ron DeSantis, our Congressman, Matt Gaetz, Senator, Rick Scott and Marco Rubio. They came out very strongly.

Farron Cousins:                  But I think the reason we can see these people come out strongly against Saudi Arabia is because they’re not in a position to actually make any influence over our policies to Saudi Arabia.

Mike Papantonio:             Obama had the right to do exactly what should have been done and asked the tough question, let me get this right. You, we’re training your people on the most sophisticated weapons in the world, knowing that you’re selling these weapons, once we give them to you. You’re giving them to Iran, you’re giving them to Al Qaeda. You are simply part of that, of that supply system. But nevertheless we, we can’t treat them as a terrorist state. Now, I will tell you this, 25,000 lawsuits are fail, are, have been filed against Saudi Arabia right now.

And you know what? It’s a drop in the bucket and the, the truth is they need, even if they paid the 25,000 lawsuits, it doesn’t phase them a bit. But we simply have to get to the point to where we can take a stand on Saudi Arabia that’s a reasonable stand. Right now, we are way, way out in la la land, in dealing with the Saudis.