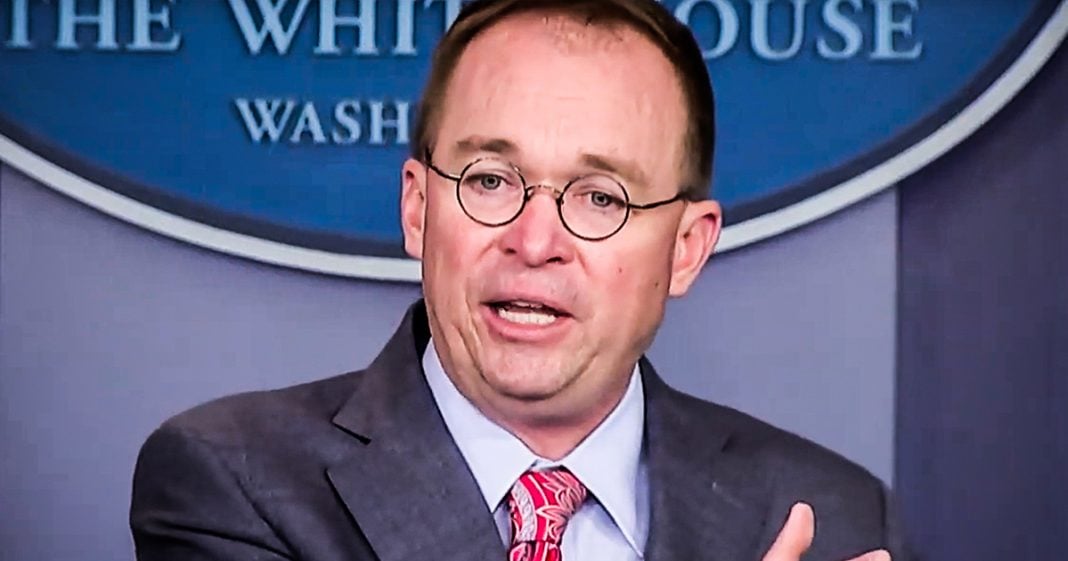 In his latest attempts to protect Donald Trump, acting Chief of Staff Mick Mulvaney said recently that personal politics should absolutely influence foreign policy. Just a few weeks ago, Mulvaney admitted to the press that Trump did the quid pro quo because he wanted Ukraine to investigate the DNC hack, so his current statement is less about political leanings and more about political ambitions. Ring of Fire’s Farron Cousins discusses this.

*This transcript was generated by a third-party transcription software company, so please excuse any typos.
As I’m sure everybody remembers, back in October, Donald Trump’s acting chief of staff, Mick Mulvaney admitted to reporters in his little impromptu press conference that yeah, Donald Trump was engaged in a quid pro quo with Ukraine because he was withholding the aid because he wanted them to investigate the DNC server hack issue. Now, he almost immediately after that impromptu press conference ended, tried to walk back those comments, but then again, earlier this week, Mick Mulvaney said the following, he said, politics can and should influence foreign policy. You may have one foreign policy you’re running on. I may have a different one. Whoever wins gets to set that foreign policy. Now I believe he threw in that second sentence just to make it sound like he’s not referring to personal politics, but that is exactly what he is talking about and yeah, we understand that different candidates have different foreign policies and whoever wins gets to implement it. That’s obvious. That’s how things have always been and Mick Mulvaney is not fooling anybody by throwing that statement into his a paragraph there, but that’s not even what he’s talking about. What he’s saying is that the personal politics of whoever is setting the foreign policy should be what sets the foreign policy. So if Donald Trump needs political help from Ukraine, it’s totally okay for him to ask for it or to change our foreign policy based on it. If something were to happen with China and Donald Trump needed their help electorally, he could shift our foreign policy towards them or Russia or Saudi Arabia. In fact, I think Saudi Arabia is probably the best example out there. When you look at the abuses that Saudi Arabia has committed both all over the middle East and in their own country, the human rights abuses, if they were any other country on the planet, we would have already invaded and overthrown them. But because it’s Saudi Arabia and they are our number one weapons purchaser and they got lots of oil, there are super best friends. Even when they dismember a journalist. Yeah, we’re okay with that because your friends, I would say that’s allowing politics to, uh, intervene with foreign policy. So here’s the thing, mr Mulvaney, it doesn’t matter if it’s personal politics for political gain. It doesn’t matter if it’s just the politics of the day or the person who’s calling the shots. Politics should not influence foreign policy. Foreign policy should be based on what’s best for both this country and that country, and when you have one single individual setting that policy, there is no way to separate that individual’s wants and desires from those of the country, or excuse me, from their foreign policy. It’s going to be against the will of the country because that’s what we’re today. Donald Trump is out there acting on his own behalf. He’s not doing things that are good for the United States. He’s not benefiting this country in any way. He’s benefiting himself. He’s cozying up to dictators and brutal fascist across the planet because he thinks it’s going to help him personally, even if it means the United States gets screwed in the po- in the process. That Mick Mulvaney is what happens when you let politics influence our foreign policy.