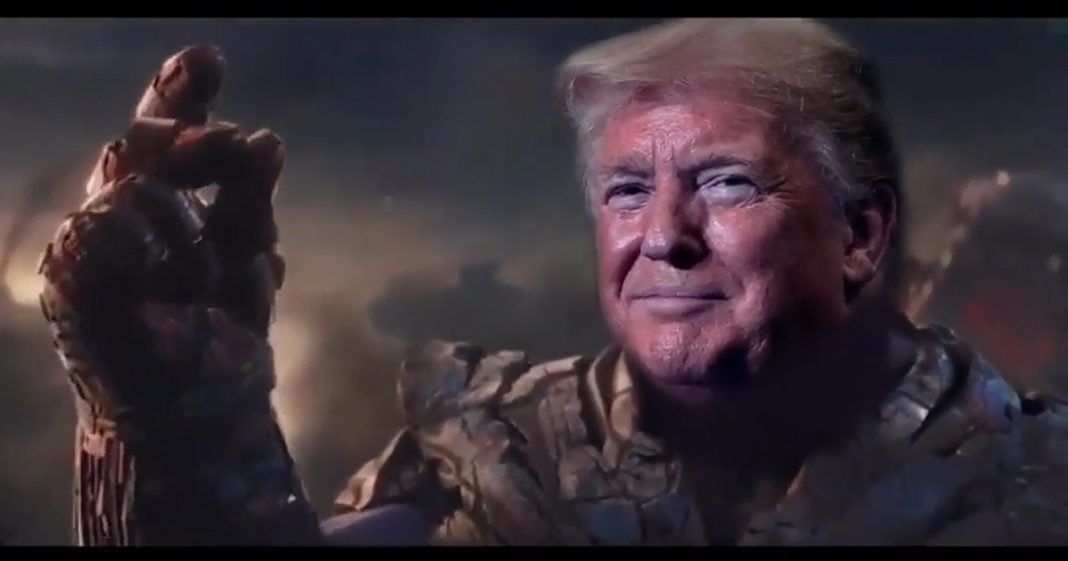 The Trump War Room, an extension of the Trump for President campaign, tweeted out a video depicting Donald Trump as Marvel supervillain Thanos, thinking that it would be the best way to own the libs. But the campaign must not have actually watched the movie, because Thanos loses in the end, and the clip they chose to superimpose Trump’s head onto is just moments before Thanos’s plan falls apart. Ring of Fire’s Farron Cousins discusses this.

The Trump war room and extension of the Trump for president campaign tweeted out a video yesterday that they thought was going to make Donald Trump look like this big bad, cool dude, ready to take on the Democrats at every turn. But, they actually chose to superimpose Donald Trump’s face over Marvel Avengers villain Thanos, and this is what they came up with.

I am inevitable. On the solemn day, I recall that the first order of buisness for members of Con…

If anybody has not seen Avengers Endgame, you may want to go and turn it off now because I’m about to give you some pretty massive spoilers as they relate to that little clip from Trump war room. Ready? All right, here it is. Thanos as we all know even if you haven’t seen the movies, is the villain, and he is a genocidal maniac. He wiped out half of the population of the universe in Avengers Infinity War and then right at that scene that they chose to put Trump’s face on where he snapping his fingers, that’s actually when Thanos was trying to wipe out all life in the universe because his plan to wipe out half didn’t quite work out, so he was just going to kill everybody. Kill everybody, and they thought, you know what? That’s the perfect place to put Donald Trump’s finger or face, excuse me. And so then, then for those who’ve seen the movie, you also understand that, that was actually the point of the film where Thanos failed.

He got out smarted and then moments later met his own demise. That snap that he does, that doesn’t result in anybody getting dusted because he didn’t have the infinity stones there. So I know I’m getting a little bit into the MCU here, but at the same time, did these people from Trump’s campaign not watch the movie? Did they not understand what was going on there? More importantly, even if they had, did they think it was a smart idea to put Donald Trump’s face over the face of a genocidal super-villain? This makes absolutely no sense. But then again, you could say that about most of the entire Trump administration since the day they came into office, none of this makes any sense. These people are pretty much crazy and unfortunately, we have to live with this for at least another 12 months.