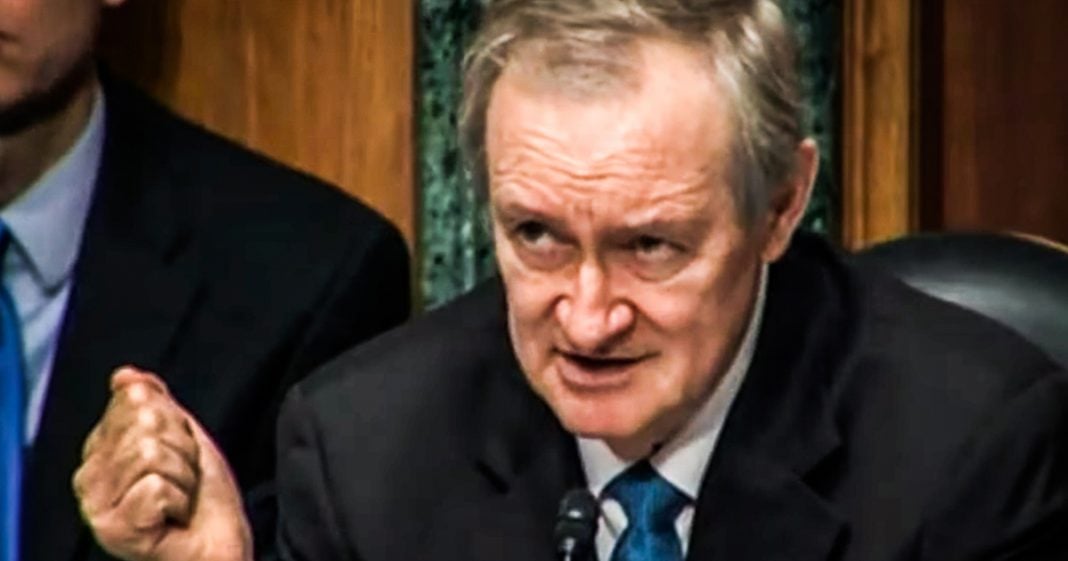 Republican Senator Mike Crapo single-handedly blocked legislation this week that would have helped the federal government fight foreign election meddling. This move shows that Republicans don’t care at all about election security, and that they might actually be hoping that it happens next year as it could be their only chance to win. Ring of Fire’s Farron Cousins discusses this.

*This transcript was generated by a third-party transcription software company, so please excuse any typos.
Republican Senator Mike Crapo yesterday decided that we don’t need to secure our elections. We don’t need to prevent foreign countries from meddling in United States elections. And Crapo single handedly blocked a bill that had originally been put forward by democratic Senator Chris van Hollen and Republican Senator Marco Rubio. But Crapo blocked this bill that would have imposed sanctions on any country caught meddling in US elections within 30 days of them being caught. Sounds like a pretty fair bill, right? You meddle in our elections here in the United States. We’re going to put sanctions on your country. Don’t screw with our elections. Simple message. Now, Democrats had typically uh framed this, as you know, we’ve got to prevent Russia and other countries. We’ve got to prevent Russia and other countries from interfering in our elections. But the truth is, folks, it is not just Russia. I know it’s easy to see the Russia boogeyman and every single thing that Democrats do these days. But we have to worry about all countries. And more importantly, we have to worry about people here in the United States hacking into our election systems, which this bill didn’t necessarily address because it’s kind of hard to put sanctions on a hacker in Ohio compared to putting sanctions on Moscow. But nevertheless, it was a good start. It’s something that is actually needed. But Crapo decided we don’t have to protect our elections. And he said the following, the mechanisms in this bill have been designed to more, uh, more to attack the Trump administration and Republicans than to attack the Russians in those who would attack our country in our elections. When we can stop trying to make it anti-Trump or anti Republican or make politics out of the problems that Russia is truly creating for us, maybe we can come together and pass yet another strong piece of legislation to move forward. There’s nothing in this bill about president Trump, by the way. There’s nothing in this bill about Republicans. In fact, the only way that you could view this as an attack on Republicans is if Republicans were counting on outside interference to win the next election. And that actually sounds like what Crapo was trying to hint at here. And let’s be honest, folks, we know that Republicans love election interference. We know that they want people to come in and oops, we gave you faulty voting machines or oops, we let this country come in and hack into our election systems. Our bad. And the reason the Republicans like that is because every single time there seems to be some kind of little abnormality in our elections, it always seems to benefit the Republicans. I mean, it’s very rare to hear a story of like a voting machine switching a vote from a Democrat to Republican. Now it has happened, but nowhere near as frequently is a voting machine will flip a vote from a Democrat to a Republican. And we all know what happened in 2016 we do know that there were a troll farms being operated in other countries spreading misinformation and propaganda on social media that helped to brainwash people. But at the same time, it also exposed a lot of American stupidity here. But we do have very real instances where other countries are attempting to get into our election systems themselves. We know that the Mueller report did tell us those are things that have happened, and we have to take it seriously. And this was actually a bipartisan piece of legislation written by a Republican and Democrat to address this problem. But Mike Crapo, Mike Crapo saw this as an attack on Trump and attack on Republicans and not enough of an attack on Russia, and therefore he blocked it, leaving our elections vulnerable once again to outside interference.