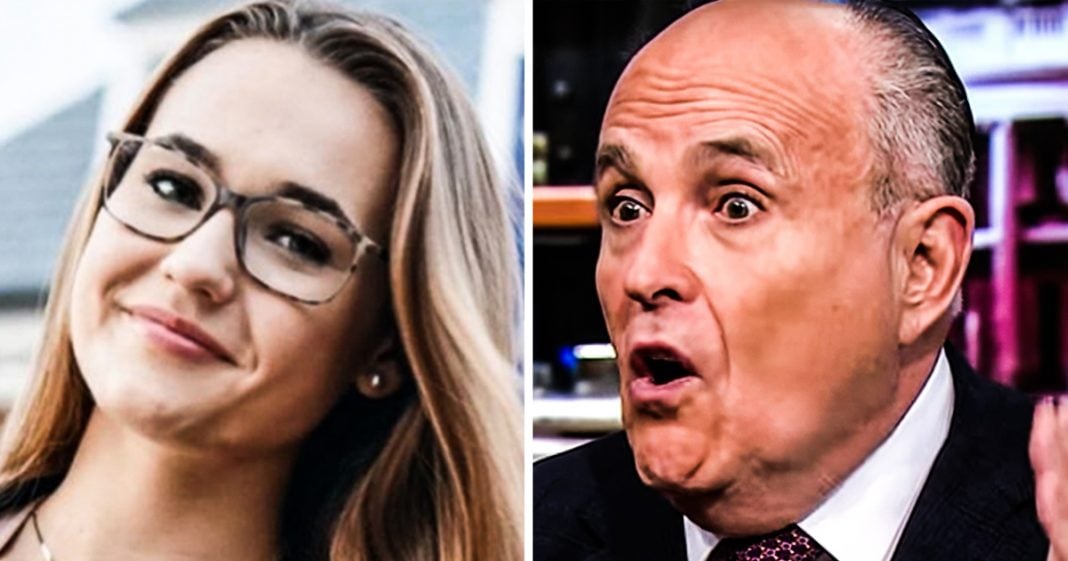 Rudy Giuliani has apparently given up on trying to pretend that he cares anymore. Recently, he hired a 20-year old communications student to be his new spokesperson, and her only qualification seems to be that she has a lot of followers on Instagram. On top of that, she apparently lied about her past work experience and political connections. Ring of Fire’s Farron Cousins explains what’s happening.

*This transcript was generated by a third-party transcription software company, so please excuse any typos.
Very quietly a few months ago, Rudy Giuliani hired a new communications director, a woman by the name of Kristianne Allen. Now Ms. Allen is only 20 years old, so this is a pretty prestigious job for a 20 year old, especially for a 20 year old who dropped out of high school, is attending now Liberty university, which is not really an accredited college and her only credentials to hold this job is Rudy Giuliani’s communication director appear to be that she was fairly popular on Instagram, not quite the level of Instagram influencer, but she had quite a few followers as most attractive women on Twitter, or excuse me, Instagram tend to have that. That’s not uncommon. That’s also not a qualification to be a communications director for a major political figure who also happens to be the president’s personal attorney. Now, here’s the thing, it’s not just that Rudy Giuliani has hired this 20 year old, inexperienced high school dropout to handle his communications department. It’s the fact that this woman has also repeatedly lied on her resume over the years. Here’s a little bit of her back story here. Um, many years ago, Kristianne Allen dropped out of high school to go work on the Donald Trump campaign. And by work, I mean she volunteered in a couple of positions. However, she put on her resume, one that she was a spokeswoman for Trump’s 2016 presidential campaign. She was a spokeswoman for Trump’s campaign. That never happened. Even members of the Trump campaign said, yeah, she was never a spokesperson for us. And then she later tried to clarify, Oh, well I spoke to people about Donald Trump, you know, out and about in public. I would speak about him. So, you know, it’s kind of like being a spokesperson because I’m speaking to people. It’s not how it works. Idiot. She also claims she was executive director of the middle Eastern women’s coalition. She, by the way, is not middle Eastern, but sure. Go for it. Why not? That’s a big deal. Except for the, this group, uh, only formed, they never actually did anything. It’s kind of like an idea, kind of like me here. When I was in college, we had a group of college Democrats. It was the official college Democrats of our college here, except there were only six of us, and because nobody else wanted it, I volunteered to be vice president of that group. That’s actually a story I’ve never told anybody because there were only six of us in a college of tens of thousands. So yeah, not really something to put on the resume, but even that is a bigger deal than what she claimed on her. She also told people that she was the niece of Republican Senator George Allen, also former Virginia governor George Allen, so she lied about who she was. People would introduce her as George Allen’s niece. Then somehow, and this is where things started to get a little bit creepy here, somehow she started hanging out with Giuliani. There’s videos of them hanging out on a boat. There’s videos of them out at dinner in New York city. This 20 year old girl with however the hell old he is, Rudy Giuliani hanging out on on boats and having dinner in New York city. This woman who has absolutely no qualifications to be in these positions, and then suddenly Giuliani says, how would you like to be my communications director as I’m literally under criminal investigation. So good luck with that. I mean, he gave you a job that even if you were qualified, you wouldn’t be able to handle because the man is so crazy. Even Giuliani’s friends, here’s a phenomenal quote. Nobody can figure out who the F she is or how she got in there. I think that about sums it up pretty well. Christina Allen clearly has a very bright future in Republican politics cause she’s got the lying down. She’s got the weaseling her way into situations she can’t handle down. That is exactly what you need to prosper in today’s Republican party. Assuming of course she’s able to handle all of the crap that’s about to go down with Rudy Giuliani.