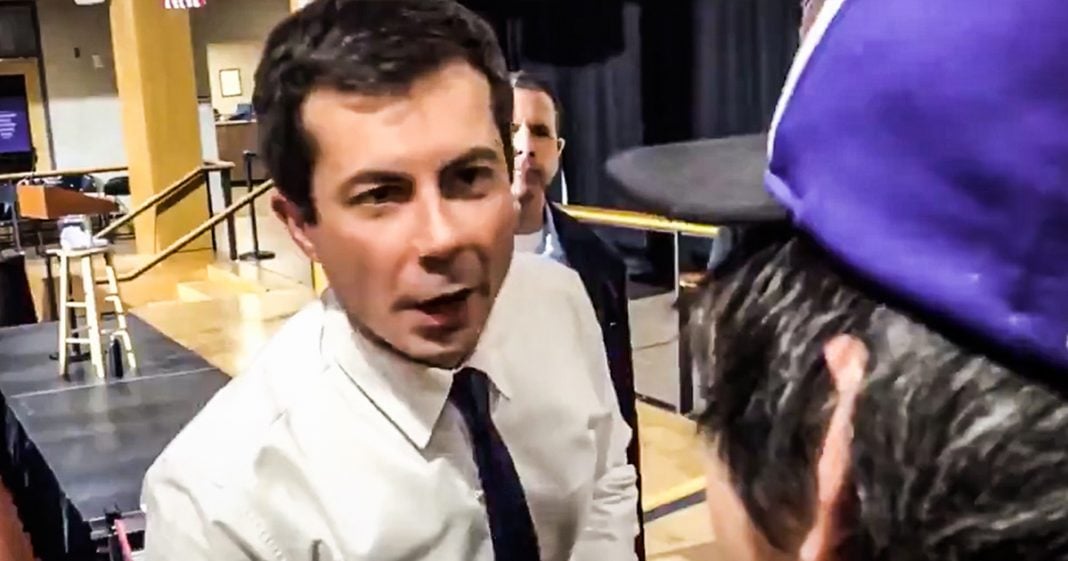 Democratic presidential candidate Pete Buttigieg doesn’t believe that he should have to stop attending closed-door fundraisers with billionaires just because he says we should get money out of politics. That is what he told an audience member when he was asked that question. One of the main reasons that people don’t trust politicians is because they don’t practice what they preach, and Buttigieg is a great example of that. Ring of Fire’s Farron Cousins discusses this.

*This transcript was generated by a third-party transcription software company, so please excuse any typos.
Democratic presidential candidate, Pete Buttigieg has a very real money problem. It’s not that his campaign is running out of money. Oh God, no, it’s that he doesn’t want people to know where his money’s coming from. And the just a couple of days ago, Buttigieg was asked by a student reporter the following question, uh, he said, I wanted to ask if you think that taking big money out of politics includes not taking money off of billionaires and closed door fundraisers. Pretty straight up question, right? Like, Hey, you said you want to get money out of politics, so does that mean you’re not going to do fundraisers with millionaires and billionaires? Buttigieg had a one word reply, that reply to that question of will you stop going to these high dollar fundraisers was no, no, that’s it. That’s all he said. This student with a very legitimate concern asking Buttigieg, Hey, aren’t you talking out of both sides of your mouth right here by taking money, even though you said we need to get the money out. So will you stop taking it? And Buttigieg just says, no. A day or two before that, Buttigieg was asked at another event, you know, Hey, you said you were going to open up your a fundraisers to the press and you haven’t done it when you’re going to do it. And he said, Oh, why don’t, I mean I don’t have a timeline for that? And then he was asked, yeah, but aren’t you the guy in charge? Can’t you just do it like that? And he said, yeah, so when are you going to do it? I don’t have a timeline. And then of course after this second story broke, the one I just mentioned about the reporter saying, Hey, aren’t you gonna not take billionaire money? Cause you say money’s bad. They’ve now decided, you know what, we’re going to open up a press or a fundraiser, excuse me, to the press. Y’all can come in. Go ahead. You know, show up. We’ll, we’ll do this. I’ll even release the names of my donors and all that stuff too because I’m totally a transparent guy now I’ve seen the light and I’m going to change. No. See Buttigieg was not visited by three ghosts the night before who told him to change his ways. What happened was that he got called out, rightfully so for being a hypocrite. We actually do have a candidate right now who is walking the walk and that person is Bernie Sanders and I don’t care if you support him or if you hate him. I think the hate is a little weird, but whatever. That’s your choice. He is the only candidate who straight up said, I’m not taking corporate money and guess what? He’s not taking corporate money. He says we should get big money out of politics and therefore he is not taking any big dollar donations. He’s not attending these fundraisers, he’s not doing all this stuff that he wants to get rid of. He is doing what he says he will do and he’s pulled in more money because it Buttigieg on the other hand says, Oh yeah, these things I’m doing, we got a ban this now if you’ll excuse me, I’ve got to go to this fundraiser over here. By the way, press, you can’t come and I can not. Can tell you who was there cause I need their money. Who are you going to trust? Honest to God, straight up answer, I don’t care who your support right now. Who do you trust? The person who says these things are bad and I won’t participate in them, or the person who says these things are bad, but I’m still going to do them. Ask yourself that question and give an honest answer because if you pick the guy who says these things should be abolished, but I’m going to keep doing them, then you yourself might actually be part of the problem.