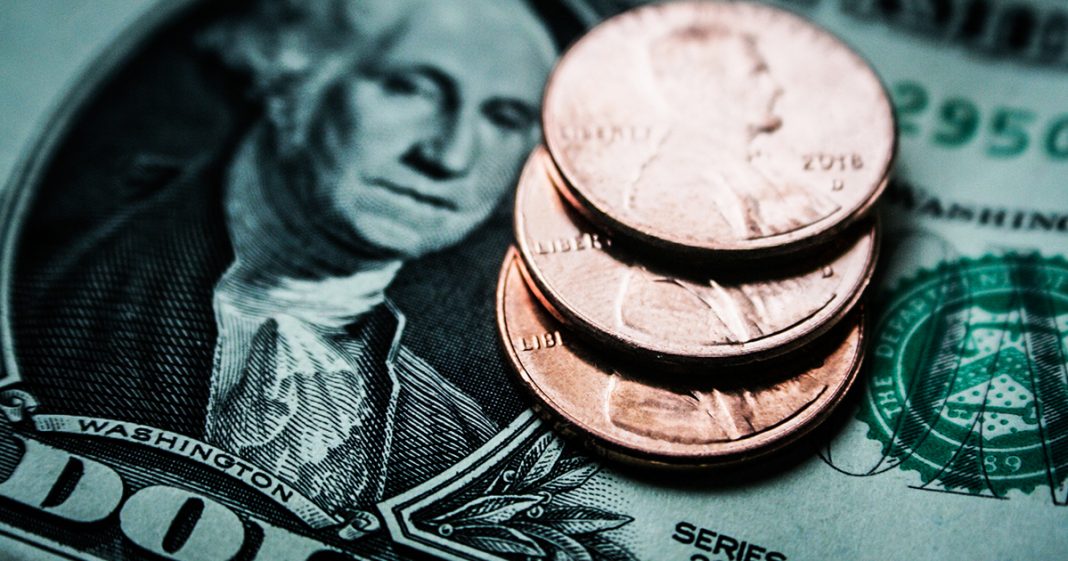 Donald Trump loves to brag about the low unemployment rate and how many jobs he has created, but a new study shows that nearly half of all working Americans are working at jobs that pay poverty wages. This is not sustainable, and even with low unemployment the lack of living wages could send our economy spiraling further downward. Ring of Fire’s Farron Cousins discusses the new data.

*This transcript was generated by a third-party transcription software company, so please excuse any typos.
Donald Trump loves tweeting out and telling us how great our economy is. He typically does it several times a day. We have the best economy. Everybody’s envious of the U S economy, jobs, jobs, jobs. He tells us at the end of random tweets all the time, jobs, jobs, jobs, and sure it’s true. Unemployment in the United States is at about a 50 year low. More people are working now than at any point in the last 50 years. So, so that is a good thing, right? No, actually it’s not because here’s the problem. People only want to ever look at that unemployment number. Is it high? Is it low? If it’s low, the president’s great. If it’s high, the president’s bad. But nobody ever stops to look, as I’ve repeatedly said, we have to do at what’s actually in those jobs reports, right? What kinds of jobs are we creating? Are we creating $100,000 a year, white collar office jobs? Or are we just creating, you know, 50 jobs per city by opening up a new McDonald’s and it turns out it’s the ladder. According to a new report, nearly half, almost half, 44% of American citizens are working in low wage jobs that do not pay them enough money to be able to support themselves or a family. 44% of people in this country don’t work at a job that pays them enough money to survive. That’s 53 million working Americans. And the Republican argument typically is, well these are probably mostly the teenagers or you know, the severely elderly who also get Medicare and Medicaid and you know, social security and all that stuff. So yeah, it’s their little part time job. Nope. Majority of these workers are what they deemed to be prime working age, which is between the ages of 25 and 54 these aren’t teenagers. These aren’t people just starting out in life, just moving out on their own, trying to make it in the big city. These are people who went to college, people who went to trade school, people who maybe didn’t need to go to either and they entered the job force only to find that there is nothing for any of them. We don’t have a jobs problem in the United States. We have a good jobs problem here in the United States. So whenever we get those rosy reports showing that, Oh my God, the us economy added a quarter million jobs last month. Wow, we are the envy of the world. take a few minutes and actually look through those jobs reports folks, they’re not as rosy as the president or this administration wants you to believe just like they weren’t during the Obama years because the truth is the middle-class never recovered from the economic collapse. The George Bush and the Republicans brought us in the early 2000’s it didn’t. Obama brought a lot of jobs back by virtue of just being the president. When the jobs came back, he didn’t physically go and get us jobs, but they weren’t good paying jobs. And that trend continues today and Trump is sitting there taking credit for it. And God bless it, let him take credit for it because these aren’t good jobs. They don’t support people, they don’t have any benefits. They still force people to work a second job just to be able to get by. Our economy has only recovered for the people at the top. For everyone else, things are just getting worse and worse, but we get forgotten and we get overlooked every time. The political leader of the day comes out and says, look how awesome my economy is. It’s only awesome if you overlook a majority of people working in this country today.