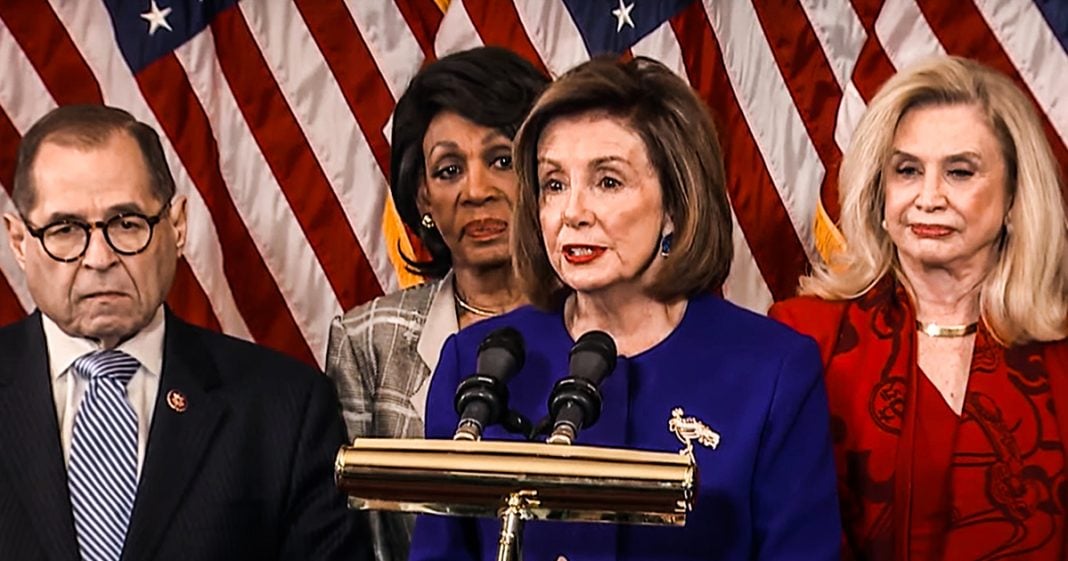 This morning, Democrats unveiled articles of impeachment against Donald Trump, with two charges being levied against the President. These are the charges that Democrats felt most comfortable with, and they believe that this will be the best sell to the American public. They only have one shot to get this right, and they’ve now taken that shot. Ring of Fire’s Farron Cousins discusses what happens next.

*This transcript was generated by a third-party transcription software company, so please excuse any typos.
Well folks, earlier this morning, Democrats from the house of representatives unveiled the official articles of impeachment against Donald Trump. Now there were two articles, two charges basically that they’re uh, asserting the president committed. First one obviously abuse of power. The abuse of power is the extortion against the Ukraine, which of course is we’re not going to give you your aid unless you give us dirt on Joe Biden. The second is obstruct obstruction of Congress. That I think is probably a really smart decision to go ahead and charge him with that as well. Considering the fact that they had issued subpoenas for people in the white house, the white house then said, Nope, we’re not going to let these people come and testify. That’s obstruction. So two very clear, very real, very easy to understand charges. The problem I have with this is that this isn’t enough, but it is enough for the public. So there’s two different takes on this right now and it depends on what the Democrats are actually trying to do. If they were actually trying to convict Donald Trump of any kind of crime you, we would have seen a lot more than just two articles of impeachment here. We would have seen the emoluments clause violations. We would have seen all the obstruction of justice from the Mueller report. We would have seen all the other abuses of power that this man is carried out. We would have had all of it if they were actually trying to get some kind of criminal conviction, but because they know they’re not going to get a conviction in the Senate, what they’re trying to do is just sell it to the American public. Most people in the public don’t quite understand what exactly was in that Mueller report. They didn’t read it. The media didn’t do a very good job of actually explaining it, so they don’t understand. They don’t care, and if the Democrats brought that up, it would likely be seen as, Oh my God, this again. We don’t care. Now you guys are just making stuff up, so I can see why it would be a smarter decision to not bring that up. As for the emoluments clause. Majority of people in this country don’t even know what that is, so you’re going to make people go do research, which they won’t do and so then you’ve already lost them again. So that’s why the Democrats solely focused on these two specific articles. Extortion of Ukraine, which is the abuse of power and obstruction of Congress, which is refusing to let people testify even though they’ve been legally subpoenaed. The public can understand that the public can digest that. They can wrap their heads around it, they can have conversations with their coworkers about it. These are pretty cut and dry and I think this may, even though I do tend to disagree with this strategy, it may actually be the best strategy at this point because you know you’re not going to get the conviction in the Senate. So that’s why you can’t go after the emoluments clause, the bank fraud, the wire fraud, the potential tax fraud that Michael Cohen had told us about. You can’t do all that unless of course you were trying to get the conviction. They know that’s a pipe dream. They know it’s not going to happen, but at the same time, wouldn’t you stand a better odds of having that happen if you hit him with all these charges? Maybe, maybe not considering the Republicans in the Senate. So all the Democrats are doing is trying to make their case to the public ahead of the 2020 election. They’re trying to say, this man broke the law. Here’s what the law says. Here is what he did. This is very easy for you to understand. Please don’t vote for him in 2020 that is the message with these articles of impeachment and in terms of swaying public opinion, the Democrats might have finally gotten this one right.