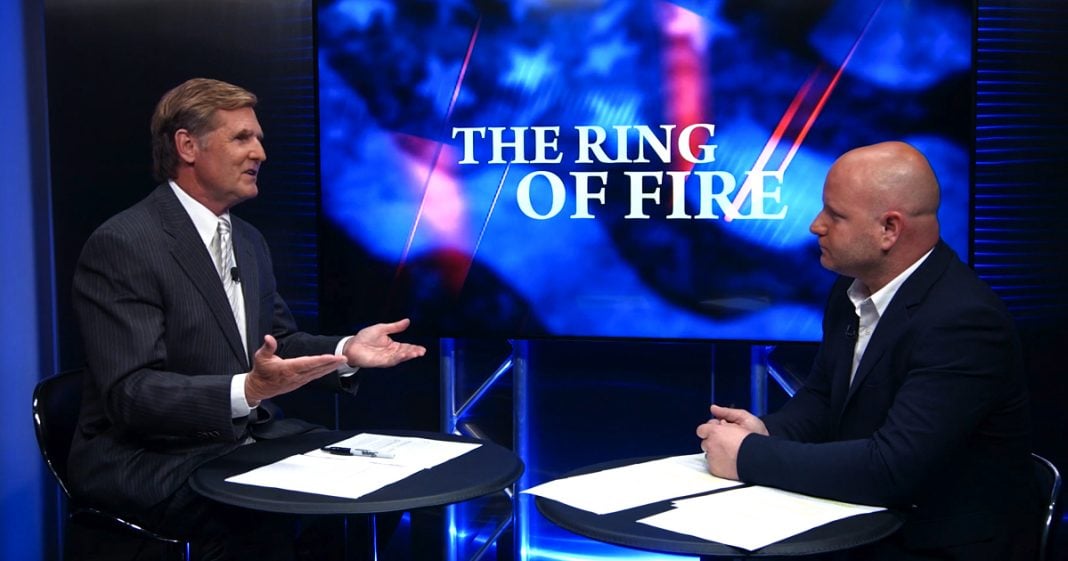 A popular brand of surgical mesh used to repair hernias has been found to cause dangerous problems in patients that have it implanted in their bodies. Plus, an environmental lawsuit has popped up in an attempt to stop the administration from selling off more of Gulf of Mexico for oil drilling. Ring of Fire’s Mike Papantonio and Farron Cousins discuss more.

Mike Papantonio: A popular brand of surgical mesh used to repair hernias has been found to cause dangerous problems in patients that have it implanted in their bodies. You know what’s so crazy about this story? This has been going on for so long. Johnson and Johnson, for example, knew that the material that was being used in mesh hernia material would cause a whole host of problems. First of all, it would migrate through the body, it would break away, and these pieces of mesh would migrate through the body.

Second of all, it would not allow the site to even heal. The infections are overwhelming. The long-term problems and pain are overwhelming. The reason they know this is because four other companies had been making the same thing, and four other companies had been sued for the same thing, and that took place years ago. But Johnson and Johnson, just like Johnson and Johnson always does, says well, you know, we’re going to do it anyways.

It’s just like, you know, the baby powder case. A friend of mine just hit them for $4 billion in 22 cases of cancer. Johnson and Johnson always focuses on the bottom line, always to the detriment of consumers. Take it from here. I’ve actually, full dis colure, I’ve handled these cases. I know a lot about them. I know why the material is causing such danger, but go ahead and talk about that.

Farron Cousins: Johnson and Johnson, through their little subsidiary, Ethicon, developed these polypropylene meshes, which as you said, other people had already had on the market. Johnson and Johnson wanted in on it because they saw that, hey, everybody else is making a ton of money, we need to develop a polypropylene mesh. Even though we know they’re getting sued, don’t worry, we’re going to make more money than they’ll take from us in the courts.

So, they make it, and sure enough it causes migration. It causes adhesion, where it either … basically becomes a part of the organ, or it makes organs fuse together if they’re touching with this mesh. It causes massive infections and horrid inflammation, because of the chemicals in this polypropylene actually hinder the healing process. It makes it harder for the hernia to heal.

And of course, doctors, anytime something like this comes out, unfortunately, these drug reps go out, they say, “Hey, we know you’ve been using these old meshes, that have been perfectly fine, but here’s something new. It’s lighter, it’s more flexible, it’s going to make your patients feel so much better, so use our mesh instead of the old things that have worked for so long.”

Mike Papantonio: Let me put this in perspective for you. Okay. You’re in a business, and five, six years before, there are hundreds and hundreds of cases saying that this thing that you’re about to put on the market will cause bad human injury. Now, for example, if you can imagine, these were actually used for vaginal … there’s a vaginal mesh program. Now, we’re talking about hernia mesh, which is the same material. It caused such injury inside a woman’s vagina and the whole area around anywhere it touched, it caused these Adhesions, it caused pain that was so bad that woman had to basically have hysterectomies, I mean radical hysterectomies because the pain was so bad.

Why do they use it? They use it because doctors who aren’t really trained in some of these procedures can then say, “Well, I don’t really need to have special training, I’ll just use this mesh package that little Susie distributor shows up at the doctor’s office with cupcakes. Doc, we got a new product. It’s this mesh product. You can use it in surgery. You don’t have to be a specialist. You can put this in anybody’s body.” It is a disaster, and Doc, who’s simply looking at the business aspect of it says, “Oh, that’s great. I can do more procedures. I don’t have to have special training, because I have this package. It’s the hernia package. It’s the Johnson and Johnson hernia package that I can use every single day without special training.”

And in the mean time, they botch the process, and hundreds of thousands of people all over the world are using these kinds of products, and it’s killing them. And Johnson and Johnson says, “Oh, that’s okay, we can still turn a profit.”

Farron Cousins: Here’s a really good analogy for what you just said. It’s basically the difference between going and hiring a master craftsman to make you a desk, or going and buying a pre-boxed packaged desk with pieces one, two, three, four, five, that comes with the instructions on how to put it together. You’re going to get a lesser quality product, but it’s cheaper and faster. And that’s what these mesh kits are. It is a step by step, paint by the numbers, every hernia is the same, so don’t worry about it if you’ve never done one before. The instructions are basically on the back of the box.

Farron Cousins: Whereas in the past, you would have a skilled surgeon go in, they wouldn’t have to use these. They would get in there, repair the tissue. It would take a little bit longer, they couldn’t do as many surgeries in the day. But when hospitals became all about profits, it was turn them and burn them. Get them in, get them out.

Mike Papantonio: Hospitals became a corporation. No longer doctor hospitals, it’s no different than Exxon. It’s just, it’s a hospital. But it’s a corporate hospital. Look, if you’re told, listen to this. You’re told, yeah, you can use this product, but you might want to know it can cause death, it can cause, where it’s put in, it’ll cause that area to deform. It’ll cause contact and migration with other organ systems that will cause failure of the organ systems. It’ll induce adhesion’s that cause chronic and severe pain that we can’t correct. But you know, you’re welcome to use it.

These are the types of things the patient doesn’t know, because the patient trusts the doctor. The doctor says, “Oh, yeah, this is good stuff.” And if they only understood how little the doctor really knows about it, especially the doctors who are using this stuff, because these aren’t doctors, as you say, most of the time, it’s not like special craftsman surgeons who can solve this problem without any kind of mesh. They can solve it without mesh, they can solve it with real tissue. But you know what, every doctor can’t do that, therefore you reduce the business that a doctor can do.

Mike Papantonio: A new environmental lawsuit has popped up in an attempt to stop the administration from selling off more of Gulf of Mexico for oil drilling. Okay. Alright, so here we are. We live on the Gulf of Mexico in Pensacola, Florida. We’ve seen what happens with BP. We have an entire ecosystem absolutely devastated, that really hasn’t recovered. You know, the best, we want to put a spin on it. It’s recovered. Our tourism is an all time high. We’re doing great. We’re back. But if you go offshore far enough, you still see the remnants of this disaster. What’s your take?

Farron Cousins: Exactly, you know, it never ceases to amaze me when we see the federal government and we saw during the Obama years, this is not something new.

Mike Papantonio: Well we saw it with Bush.

Mike Papantonio: We saw it with Clinton, we see it with Obama.

Farron Cousins: That we come through this massive disaster and we learned nothing from it. We’re talking about 78 million additional acres that are up for lease right now, and…

Mike Papantonio: Who put them up for lease, the Trump administration?

Farron Cousins: Yeah, and this is Ryan Zinke, Department of the Interior, but…

Mike Papantonio: In the media known as “Stinky.”

Farron Cousins: Yeah. What’s even dumber about this.

Mike Papantonio: Not My words, that’s…

Farron Cousins: Yes, but they, they’re trying to make it to where it’s not necessarily the deep water. Which was what Deepwater Horizon was. No, no, no. These are closer inland because they think for some reason thats safer. Now, could you imagine if we had the BP oil spill, but it was 10 miles out from shore. This whole area would still be covered in oil, but they think it’s smarter because it’s not as deep.

Mike Papantonio: Yeah. Their argument is we have less risk the shallower we go, but if you’ve ever been to Pensacola or ever been to resort beach area and you
understand that you can drive a couple miles and see these oil derricks out there.

Mike Papantonio: You understand what the risk really is. It puts this community under huge risk. Tourism is the only way that we have to survive in this community and there’s a lot of communities around the country. Typically what you’ll see is you’ll see these beach communities, also that you’ll see military involved in, you know, there’ll be a military base. They typically like to operate out of an area like this and resorts, you take the resort part of it away and it’s Katy bar the door.

Mike Papantonio: Yeah, I agree. It’s a very tough road. Thank you for bringing it though.

Mike Papantonio: I mean, you know, we gotta try.