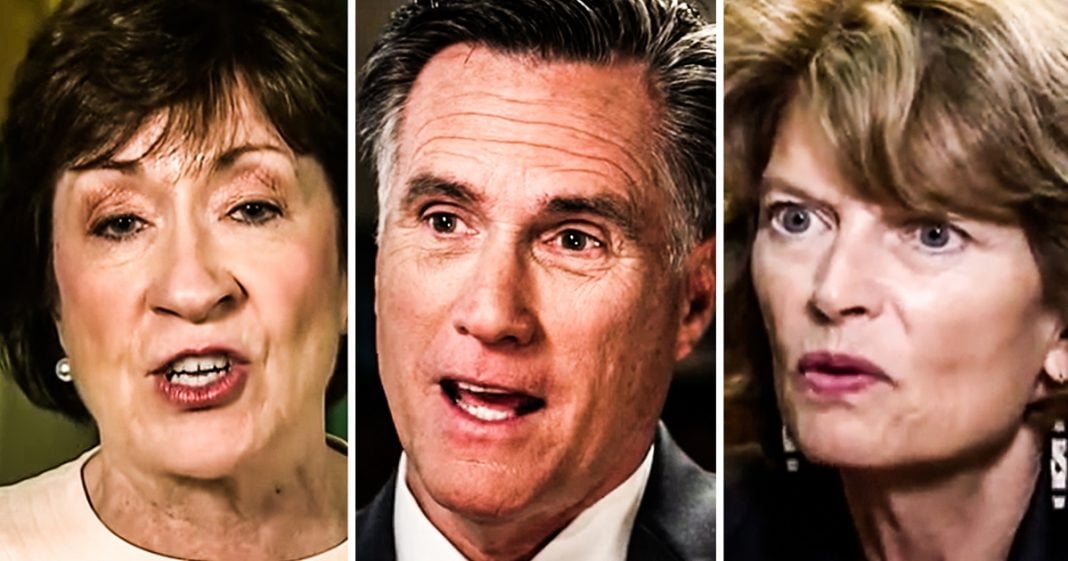 The Hill recently published an article detailing three different Republican Senators who could possibly vote to convict and remove Donald Trump from office during the Senate impeachment trial. It isn’t going to happen. The media is being negligent at best and dishonest at worst with their coverage of things that may or may not happen, but the truth is that there will not be enough votes to get Trump out of office. Ring of Fire’s Farron Cousins discusses this and why we should still pursue impeachment, even if we know how it will end.

*This transcript was generated by a third-party transcription software company, so please excuse any typos.
You know, every now and then I’ll stumble across a headline that just immediately puts me in a bad mood and it puts me in a bad mood because it’s either demonstrably false or completely irresponsible and here over the weekend the Hill published an article with a headline that manages to be both of those things, both false and irresponsible. Here is the headline they ran with, here are the Senate Republicans who could vote to convict Trump. Their article then goes into name Susan Collins, Mitt Romney and Lisa Murkowski, right? Three of the more moderate Republicans in the Senate. You know, Mitt Romney’s even gone out there and said, I think what Donald Trump did was wrong and I’m very concerned about it, very concerned. Much like Susan Collins was very concerned about Brett Kavanaugh’s past, which she told us right before she voted for him. This article, the headline and the Hill for publishing it are stupid and no offense to Alexander Bolton is the person whose name is on this article. I’m sure you were assigned this article by somebody. Hopefully this is not something you chose to do because if it is, this is grossly irresponsible. None of these Republicans, not Collins, not Romney, not Murkowski, are going to vote to convict and remove Donald Trump during the Senate impeachment trial. In fact, I’m willing to bet that a whopping zero Republicans in the Senate are going to vote to convict and remove. It’s simply not going to happen. Now, don’t get me wrong, I 100% believe based on the evidence that Donald Trump broke the law, he should be convicted and removed from office. There is no question about that. but to give people false hope like this, which is what this headline attempts to do, and we’ve seen the media run stuff like this for weeks now acting like, Oh, maybe some Republicans are going to flip. They’re not folks. They’re simply not. We all do unfortunately need to curtail our expectations a little bit about what this impeachment inquiry is going to yield because you will not yield Donald Trump getting removed from office. Now, I have said in the past that there are very specific little routes that if those routes are met for at least 20 different Republicans, then sure you could get conviction and removal, but what those paths would have to be is that for every single individual Republican who flips, if they flip, they would one have to see that poll showed that they would lose their reelection to the poll would have to prove beyond a doubt that the only reason they would lose that election is because they didn’t vote to convict Trump. If you do not meet both of those criteria, they won’t flip, they won’t flip, and you’re not going to meet those criteria because those are things that are nearly impossible to poll, impossible to sample. So it’s not going to happen. Certainly not going to happen with 20 Republicans. I mean hell, Democrats are going to be lucky if you can even get all your Democrats to vote for conviction and removal. Joe mansion definitely won’t. And you’ve probably got a couple other kicking around in there who won’t and then we’re all going to look like idiots. And then you’re going to have people who read trash like this from the Hill who say, but I thought the Hill shed people were gonna flip. I thought they said Republicans had a conscience. And that’s my biggest problem with this article and other articles like it, not just at the Hill, but the Hills, especially trash most times. Um, it’s that it, it paints Republicans in a positive, undeserved light. There is nothing positive about Susan Collins or Mitt Romney or Lisa Murkowski. And they actually say in the article that Murkowski’s probably the best chance to flip on Donald Trump cause she bucks him and Senate with her votes so many times. Yeah, she votes with Trump 74% of the time. Okay. Do your research. I did took about five seconds. Not hard, but these Republicans aren’t gonna flip. They aren’t suddenly going to grow spines or consciouses. So stop trying to convince the American people that they might.