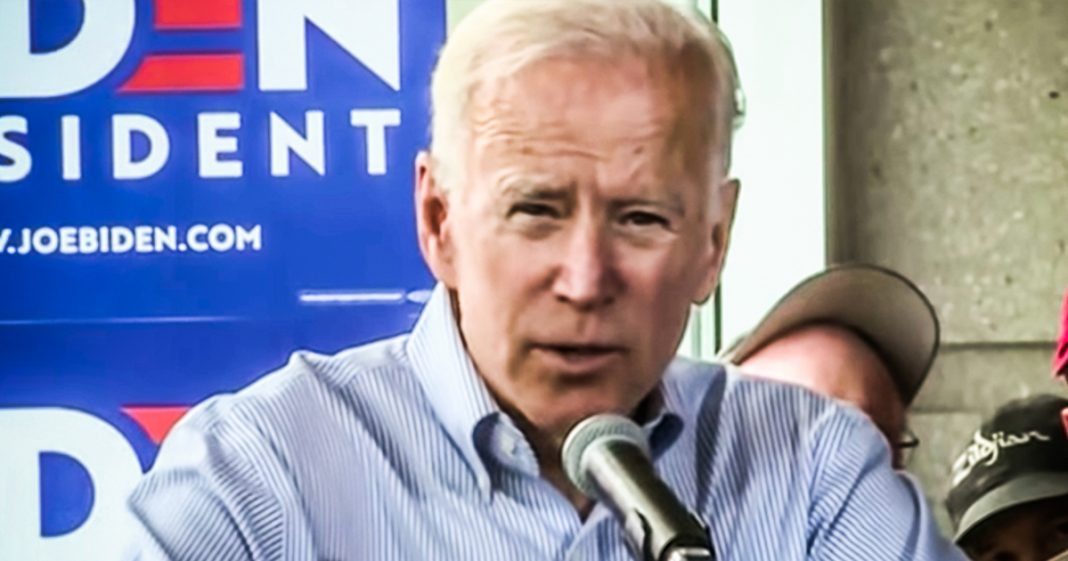 In a bizarre turn of events, Joe Biden admitted that he’s hoping a decent number of Republicans win reelection next year because he believes that we need the Republicans to balance us out. There was a time in this country where that statement could have been true, but that is in the distant past compared to where we are now. The pendulum is swinging back to the left, and that is where it needs to go in order to right the wrongs of the past few decades. Ring of Fire’s Farron Cousins discusses this.

*This transcript was generated by a third-party transcription software company, so please excuse any typos.
Joe Biden really hopes the Republicans can pull out some great victories in 2020 and no, I didn’t misspeak. Joe Biden is rooting for Republicans in 2020 he said as much on Friday in Iowa as part as a part of his bus tour of Iowa. He said the following, I’m really worried that no party should have too much power. You need a countervailing force. There’s an awful lot of really good Republicans out there. I get in trouble for saying that with Democrats, but the truth of the matter is, every time we ever got in trouble with our administration, remember who got sent up to Capitol Hill to fix it. Me, because they know I respect the other team. No, it’s cause they know you’re a pushover and they know that you’re going to cave and give into the demands of the Republicans like you did every single time there was any kind of big thing happening in the Obama administration that could have made people’s lives better. You and the Republicans worked with Obama to water it down to where it was virtually indistinguishable from doing nothing. Joe, There was a time when I also believed that you did kind of every now and then need to balance things out with an equal mix of Republicans and Democrats. I don’t think that anymore because I’ve been paying attention for the past few years. I’m shocked that you haven’t been, Republicans don’t care about bipartisanship. Republicans don’t care about following the rules. Republican certainly don’t care about helping the average American citizen. So why in the hell would we think that any of these people would work with the Democrats? They won’t. They proved that during the Obama years. They’re proving it once again in Congress right now. They’re not going to do it. They’re a different breed than when you first entered politics, Joe. So don’t sit there in Iowa saying, well you know they’re going to be pissed at me for saying this, but I hope a lot of Republicans win. Cause there’s a lot of good. No, there’s not honest to God. There is not Joe, I can’t think of any. I cannot think of any. Not a single one serving in Washington DC on the Republican side is a decent person. Not one, not one, but you think they are and you’re going to go across the country peddling this message of centrism because it worked out so well for you in the Obama administration, didn’t it? I mean people seem to forget that when Obamacare first became an idea that was then drafted into legislation, it originally had a public option. We would have had the option of universal healthcare, but Joe Biden is, he says he was sent to Capitol Hill to work it out and he did work it out. He worked it out with Republicans. He worked it out with members of the health insurance lobby and they took it out. That was Joe Joe’s partly responsible that, and that’s not what we need as president of the United States. There’s the pendulum, right? We all know this, we’ve talked about it. The pendulum right now has swung so far to the right that this country is virtually unrecognizable. The only way to get it back into a path, even a path of being on the center when you’re so far to the right is to swing it equally as far to the left. But over here on the left, these ideas, people call extreme, have an overwhelming approval rating from majority of people in this country regardless of their political affiliation, debt-free college, Medicare for all, green new deal, $15 minimum wage, getting money out of politics. And unfortunately those ideas are seen as extreme. On the other side of the pendulum where we are now, we have locking babies in cages after ripping them out of their parents’ arms. A trade war that’s costing American citizens $40 billion a year, a healthcare system so dysfunctional that one in four people on insulin are having to ration it. We people are hopping the border to get out of our country to go buy cheaper prescription drugs. That’s the right side of the pendulum where we are now, and it has to swing back to the other side as far as it can go. But Joe Biden doesn’t want that. Joe Biden wants that pendulum to just stop in the middle because that is exactly where he lives and there is nothing that will change Joe Biden’s views on anything happening in this country. Joe Biden may not be worse than Donald Trump, but I don’t see any way possible that Joe Biden is going to be better. I mean look at the Obama administration, look at the Obama years, all the things that could have been but weren’t. They still kept the drone war going in the middle East, ramped it up, killing civilians left and right. 90% of the time they missed their actual targets and ended up killing civilians. Biden was part of that administration. Maybe, I mean, look, we had kids being locked in cages during Obama years too. Biden was part of that. So is he going to end that policy now? Likely not. The only thing that may be different is that Biden might might in the trade war. Other than that, I’m not seeing a whole heck of a lot of difference between Joe Biden and Donald Trump. Yeah, Joe Biden’s a little nicer on the outside. We’ll friendlier, sometimes a little too friendly, but in terms of getting things done and making the country better for American citizens, probably never going to happen.