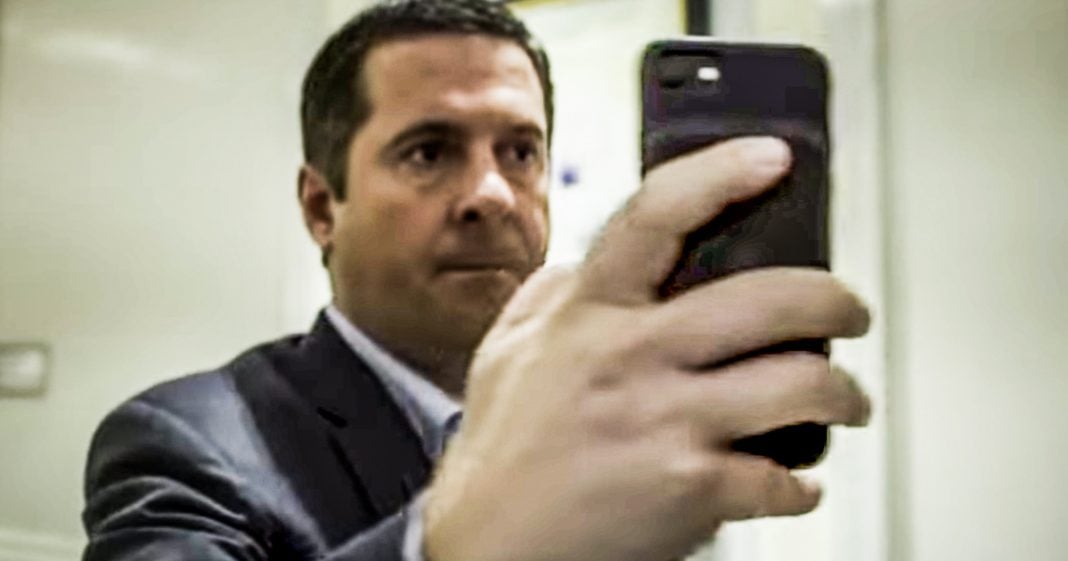 Republican Representative Devin Nunes claims that he was “stalked” by a reporter trying to get information about his contacts with Lev Parnas. That reporter was Lee Fang from The Intercept, and the video that The Intercept has released showed that Fang was doing his job in a very cordial and polite way. Nunes is a liar who can’t handle confrontation, and his attacks on the press are just further proof of that. Ring of Fire’s Farron Cousins explains what happened.

*This transcript was generated by a third-party transcription software company, so please excuse any typos.
Over the weekend. Devin Nunez was in a panic after a reporter from the intercept, had the audacity to approach him at a $15,000 a plate Republican fundraiser and ask him about his contacts with Lev Parness. Now here’s what Nunez tweeted out after this terrifying encounter. This guy stalked me in hotel lobby after my appearance on Fox and friends. Saturday AM maybe he was in Vienna with CNN hashtag goodnight Vienna. Now when I saw this tweet and I saw that picture on Twitter on Sunday, I immediately knew who that was. That’s Lee Fong from the intercept. Like he’s an amazing journalist. We have had him on ring of fire over the last 15 years, dozens of times. He is wonderful at, he’s very good at his job. So I immediately after just seeing the picture, I was like, well, that’s not how Lee is. He was not stalking you. We know him. Lee’s a good guy. And so of course not long after a Devin Nunez posted this tweet saying I was stocked at this fundraiser. The intercept released the actual video of what happened and not just a, a very flattering actually picture of Lee Fong. And here is the video of how this actually went down.
[Hey, Congressman Nunez, I just want to ask you about your, I’m a cop, I’m a reporter from the intercept. Want to ask you about, uh, your calls to Lev Parness uh, what was the content of those calls? Were you part of this effort to pressure the, you do Ukrainian government to investigate Hunter Biden? Thank you Congressman.]
So there you see, Lee Fong was not stalking Devin Nunez. He wasn’t being rude, he wasn’t being mean, he wasn’t being confrontational. He was being about as polite as any human being could possibly be to a guy like Devin Nunez and Nunez. Instead of answering the question or even addressing the question holds up his little phone and he takes a picture, Lee and he takes a picture of the camera man. He takes another picture of Lee and then he storms off. But Devin, here’s the thing, man. Most of the country is like Lee Fong right now. We want answers. We want to know why you tried to cover up these communications you had with Lev Parness. We want to know why you were even having conversations with Lev Parness. We want to know who you met with when you traveled out of the country with several members of your staff, because that’s when Lev Parness says he was introducing you to Ukrainian politicians who could get you the information that you needed. Your story doesn’t add up, Devin. Everybody else’s stories do, and eventually you’re going to have to come clean. I mean, at this point, it’s not out of the realm to go ahead and just call you a co-conspirator because you are clearly in on this entire endeavor here, or at least according to the people who’ve already admitted that they were a part of it and now they’re roping you into, they have nothing to lose at this point by selling you out. But if they cooperate and they play ball and they provide the correct evidence to back up their claims, they could avoid a lengthy prison sentence. And that is what left Parness is trying to do right now. But Devin, you’ve got a lot of questions to answer, and if you panic anytime someone is nice as Lee Fong gets up in your face than man, you got a rough 12 months coming up for you.