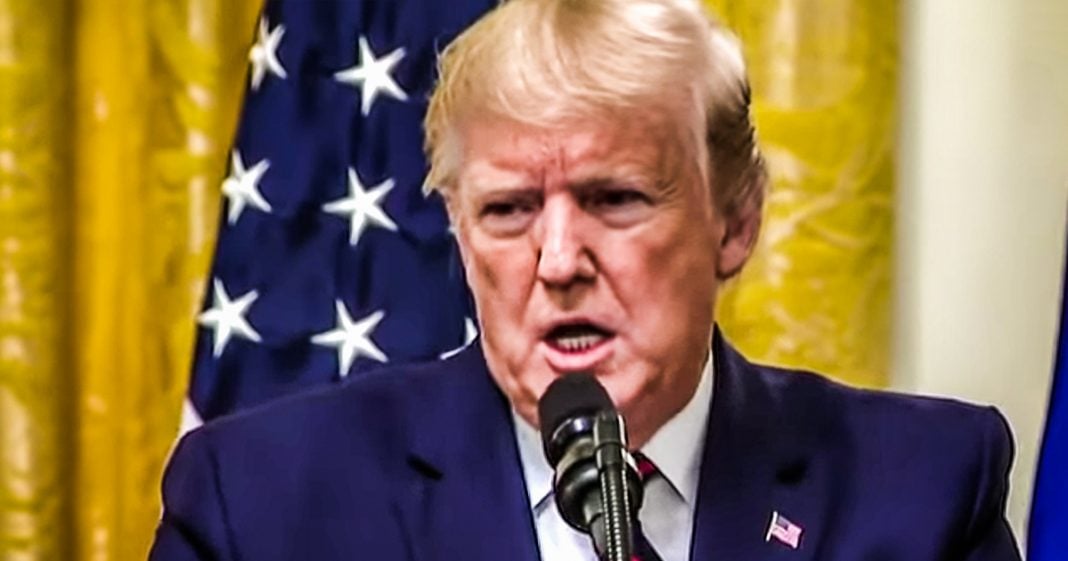 Two separate courts will be hearing appeals from the Trump administration this week as they attempt to explain how he’s not violating the Emoluments Clause of the Constitution by still receiving money from his businesses. Trump has not divested and still can withdraw money at any time he pleases, and foreign officials and even domestic groups have been booking rooms at his hotels in an effort to gain his favor. Ring of Fire’s Farron Cousins explains what’s at stake with these cases.

*This transcript was generated by a third-party transcription software company, so please excuse any typos.
This week, two separate courts, one in Washington DC and one in Virginia are going to be taking up cases brought by Donald Trump’s lawyers, appealed from lower courts about Donald Trump’s violations of the Constitution’s emoluments clause. Now, both of these lawsuits are saying that the president has been violating the emoluments clause of the constitution by still taking in the profits from his businesses, both here in the United States and the ones abroad, and they say that because you have foreign nationals who come and stay at his hotels over here and because you have US officials who stay in his properties overseas, specifically the one over in Scotland, then yeah, that constitutes a very real violation of the emoluments clause. Now, Donald Trump’s attorneys have appealed these cases after the lower courts said they could in fact go through or proceed because according to Trump’s attorneys, there can’t be a violation of the emoluments clause if Donald Trump’s job as the president isn’t why these people are booking the hotel rooms, and that is about as flimsy of a legal argument as you could possibly come up with because that is the entire case. Us officials here from the United States traveling overseas wouldn’t be staying at Donald Trump’s properties if Donald Trump wasn’t the president of the United States. Their argument from the justice department, by the way, handling this personal affair for Donald Trump. They’re saying that no, these US officials would be staying at Turnberry regardless. They’d be staying at other Trump properties in other countries regardless of who was president of the United States. And that’s a flat out lie and that’s going to be very easy for these groups who filed the suits to prove because it didn’t ever happen in the past until Donald Trump became the president of the United States. It’s that simple and the judges are going to see it as that simple as well. You know, for a guy who claims he always hires the best and brightest. Donald Trump really is the worst person in the country at hiring lawyers, and the scary part is these aren’t just lawyers he picked up off the street. These are lawyers from the justice department itself, so here’s what’s at stake. Obviously Donald Trump’s flimsy legal argument is not going to stand up in court. We know there is evidence to support the fact that there are foreign nationals who book huge blocks of rooms in Donald Trump’s hotels and then they don’t show up. They pay for the rooms to Curry favor with the president and then they don’t actually use them. It’s their way of funneling money back into Donald Trump’s pockets. The RNC is doing this by booking their events at Donald Trump’s clubs. Other conservative groups are doing the same thing. They’re not booking rooms and not showing up, but they’re hosting events at these clubs to put a lot of money in Donald Trump’s pockets so that they can gain favor with the president. That’s the scam. That’s how it works. They know exactly what they’re doing and why they’re doing it. If he wasn’t president, they wouldn’t be doing it cause they didn’t do it in the past. That’s fairly obvious. So assuming these cases go the way that they should, legally speaking, what’s going to happen? Well, what could happen is that the courts could force Donald Trump to divest from his businesses completely, which would basically mean Donald Trump would no longer have any financial stake, any financial interest in anything that bears his name. He loses every single bit of it. So if that were the case, does he stay president? Does he stay in office or does he say to hell with this? I quit. I’m not going to give up a multibillion dollar industry allegedly, just to be president for another few months or maybe even four more years. What do I do after that? I don’t think Donald Trump would stay in office if the option was be president and lose your businesses or keep your businesses, but don’t be president. He’s going to go with money every time. That’s why he wanted to become president because he thought he could profit off of it, and if suddenly he finds out he can’t make a dime off being president of the United States, I think the chances of him saying, well then I’m not going to be president of the United States anymore. I think those chances rise up much higher than they are today.