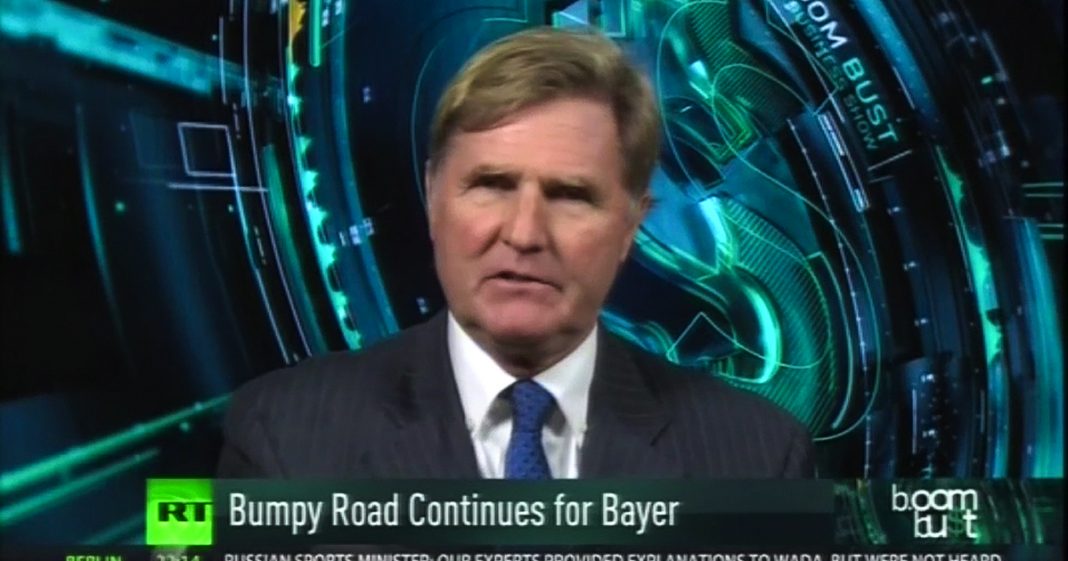 Via RT America: It seems to have gone from bad to worse for Bayer pharmaceutical ever since acquiring US seeds company Monsanto for $63 billion last year. And now Bayer says that the number of cases alleging that the company’s herbicide weed killers, including Roundup, have caused cancer, have more than doubled over the past three years. America’s Lawyer host and veteran trial attorney Mike Papantonio joins the show to discuss.

Brent Jabbour:                    It seems to have gone from bad to worse for Bayer pharmaceutical ever since acquiring US seeds company Monsanto for $63 billion last year. And now Bayer says that the number of cases alleging that the company’s herbicide weed killers, including Roundup, have caused cancer, have more than doubled over the past three years. In July, the company reported that 18,400 cases and that number ballooned to 42,700 cases by October 11th.

Ben Swann:                           Yeah, well already three US juries have ruled against Bayer in cases brought by Americans claiming that Roundup caused their cancer. Shares in Bayer have plummeted by 30% since the acquisition was completed in the summer of 2018 last year. So joining us now to go in depth, is host of America’s lawyer, America’s lawyer himself, Mike Papantonio, Mike, thanks for being here.

Ben Swann:                           So let’s, yeah, let’s start with this claim that Bayer is making that there is extensive scientific research, they say, showing that the glyphosate based herbicides are safe and they say do not cause cancer. But again, three juries have already ruled that they do. So how does Bayer overcome that?

Mike Papantonio:             Well, they can’t. I mean, the truth is, it’s being clear now that what the science they’re relying on is science that they paid for. They went out and found biostitutes that would sign off on what it, whatever it is. They would actually write the article. It’s called ghost writing. They would write the article, they would take it to a scientist or a doctor that wanted a little, make a little extra money on the side, little extra money, half a million or $1 million simply to put their name on the bottom of the document. It was all a lie. The clinical data was phonied up. The clinical conclusion was phonied up. But that didn’t stop, it didn’t stop scientists that wanted to make this little extra money signing off on it, saying it. Because of that, there’s 42,000 lawsuits right now and many, many people have been injured by Roundup and that number, I got to tell you, it just keeps increasing.

It’s going to continue increasing. Look, can you imagine being the people at Bayer corporation who made the decision to buy Monsanto knowing that this liability case was way, way beyond anything that was being publicized. It’s laziness. It’s corporate laziness. It’s a CEO and the advisor to the CEO at Bayer who didn’t have enough sense to look behind the science and what they had coming at them was, was these silk stocking wall street lawyers that were telling them, oh yeah, this is a good merger. This is a good buy for you. So they purchased this for $62 million. They, obviously ignored the fact that the claim, just right now, if this case were to settle today before these numbers increase, they’re already looking at 15 to $16 billion just to make this go away. In another two months, another three months, that number of 42,000 cases will be up to 70,000 and so the CEO for that person, first of all, not to be fired and have all of the, all of the folks that advise them not to be fired, cleaned out and said, you idiots bought a problem that’s going to cost us 15 to $17 billion.

Knowing, knowing clearly that the science showed a clear relationship between this product and cancer. So I mean you go tell me you’re more familiar with the business world than I am. That what I’m familiar with is that we, the way this was sold to them is they had these silk stocking lawyers that were charging two thousand, three thousand dollars an hour telling them, oh yeah, this is fine. We’re okay. And then they get hit the first time, then they get hit the second time, then they get hit the third time and I’m going to hit them again at the first of the year. And the science is clear. They can try to dress it up any way they want. This is a losing proposition for Bayer and Monsanto. They better get out of this case now. From a business standpoint, they better move on right now.

Brent Jabbour:                    And it’s interesting that you mentioned the thoughts of Bayer’s CEO because they’ve been making the point right now, that this huge jump in lawsuits is because the surge in anti Roundup advertising on the plant, plaintiff’s side now estimating that over $50 million on TV advertising alone has been spent in the third quarter of this year. You know, how much of this actually has to do with advertising and it’s actually people who have problems here?

Mike Papantonio:             Think of how ridiculous that argument is. Okay. They’re complaining because people are advertising and now all of a sudden people that say, yeah, I saw the advertisement and oh by the way, I have non Hodgkin’s lymphoma and oh, by the way, I’ve been around Roundup for three years at a really steady pace. I’ve been exposed to it. I’ve had it on my skin. I’ve breathed it in. Look for, for somebody to make the argument, the only reason we have this problem is because advertising, that same idiot who makes that statement should say, shouldn’t we have looked at this Bayer before we spent $62 billion buying this useless company that’s been lying to the world for two decades.

Ben Swann:                           I wanna stop you for a second because I have one more question. We’re almost out of time. I want to get to this real quick. Bayer, they’re, they’re trying to engage in mediation at this point, right? Trying to work something out. But it sounds like what they’re trying to do, and I want to get your, your take on this as a lawyer is, is essentially get a settlement which would cover potential future claims and then cap liability. About 30 seconds here, what do you think are the chances of them actually getting that?

Mike Papantonio:             Yeah, well, okay, look. Yeah. Okay. Here it is. The negotiator working on this case for the plaintiffs is a dear friend of mine. He’s one of the best negotiators in the country. His name is Perry Weitz. If they don’t take a lead from Perry Weitz, they’re going to be in trial for the rest of the life of that company. I can promise you. They have their one shot. The only person negotiating right now is Perry Weitz. People like me who do this seriously for a living, we have faith in Perry Weitz. If they don’t get it now, they’re going to be 70,000 cases into this and it’s going to cost them far more than $17 billion.