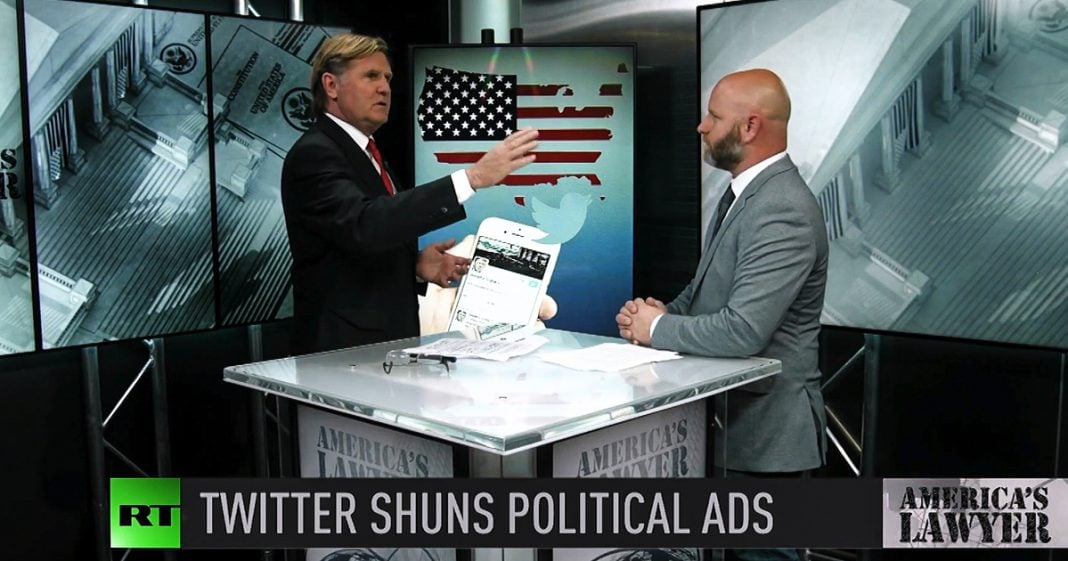 Mike Papantonio:             Twitter announced recently that their ban on political advertising is going to extend to legislation and social causes, a move that could hurt candidates in groups who aren’t funded by big money donors. Farron, you said, you’ve said this a couple of times. Anytime you see social media saying we’re gonna, we’re, we’re really gonna make it difficult for you to use social media to advertise your idea, your legislators, legislative concept, your candidacy. Who suffers?

Farron Cousins:                  The, well the people who are grassroots mostly. And one of the things that’s really so awful about this new decision is that you can’t even run an ad on Twitter anymore because they ended it November 22nd. You couldn’t run an ad saying, you know, vote yes or vote no on proposition one. You couldn’t explain the benefits, you know, proposition one just to generic. But you can’t advocate or any outcome in any kind of race or legislative battle. And that is absolutely devastating to the people who use this as the tool to talk to their constituents.

Mike Papantonio:             Well, here’s what it says, it says that it’ll define political content. Now follow this. It’s going to define political content as anything that references a candidate, a political party, a pointed government official or referendum or ballot measure or legislation or regulation. What in the hell, I mean, that’s what journalism does. We talk about these things. The problem is that we, that this is being run, these decisions are being run in an in an environment where politically correctness is killing us. I mean, we’ve got, we’re like, we’re, it’s almost like are we too stupid to be able to read something or see something and make a decision ourselves?

They want to think for us and it’s not just Twitter. We’re seeing it across the board right now. It’s like, it’s like this millennial snowflake concept that is killing us. It’s all based on political correctness and we’ve got to get away from it. The first amendment matters. We ought to be able to talk about a ballot issue. We ought to be able to talk about legislative issues that concern us on things like the environment, dangerous products, corruption in government. This is saying we can’t do that.

Farron Cousins:                  Well, the problem is they saw Facebook. Facebook took a lot of heat and rightfully so, but then Facebook said, listen, our decision is we’re not going to fact check anything. You want to run an ad, you run an ad. If somebody reports it as being bad, we’ll look into it. But we say whatever, run, whatever, and Twitter says, wow, that’s, that’s one extreme. We’ll go to the other extreme and say nothing at all. You can’t do anything. But Twitter is a far greater tool to reach a huge amount of people in the shortest amount of time. And that is what these grassroots candidates, these, you know, consumer organizations, they rely on Twitter far more than they do on Facebook.

Mike Papantonio:             Okay. Let’s, let’s put it in a real, healthcare, okay. Universal healthcare. What do we have with universal healthcare? You have a concept, a cause. Correct? And you have a bill legislative bill, and according to the rules, you can’t talk about that on Twitter. Now, that’s how ridiculous it’s become. Now the other part of it is we’re going to have, who is it that’s going to make these decisions? I mean, you’re going to have people that understand that all of these issues so well that they can define, well, this is actually, this is actual political discussion. We can’t permit this. Or is this discussion that ties into a bill that’s pending that we ought to be able to talk about?

You see, the problem is anytime you go down this avenue, you’re saying to the American public, you are so frigging stupid that we can’t trust you to be able to read something and figure it out yourself. That’s what this is. This is, this is, this is let’s take care of stupid people because we’re smarter than they are.

Mike Papantonio:             And finally tonight, some good news. California has issued a moratorium on hydraulic fracking processes and new fracking leases in the state. This is just a temporary halt to these procedures, but it could potentially lead to a permanent ban on the state, throughout the state. This move by the state came after activists and researchers put tremendous pressure on lawmakers to finally consider the risks involved, specifically the increased risk of earthquakes that’s been associated with fracking. This risk is so great that several European countries have already banned fracking all together. You can’t do it, period.

They also highlighted the dangers of chemicals used during the fracking process, which include countless carcinogens and toxic heavy metals capable of poisoning drinking waters and entire aquifers. Unfortunately, the public is still in the dark about all the chemicals used thanks to a law that, oh by the way, Dick Cheney helped pass years ago. That’s a real comfort. This story shows how effective activism can be to influence major positive change in this country and when the voices of the public are loud enough, even the fossil fuel industry better pay attention.

That’s all for tonight. Find us on Twitter and at Facebook on facebook.com/rtamericaslawyer. You can watch all RT America programs and Direct TV, Channel 321 and also stream them on YouTube. I’m Mike Papantonio and this is America’s Lawyer, where every week we’re going to tell you the stories that corporate media is ordered not to tell because their advertisers won’t allow them to do that. Have a great night.