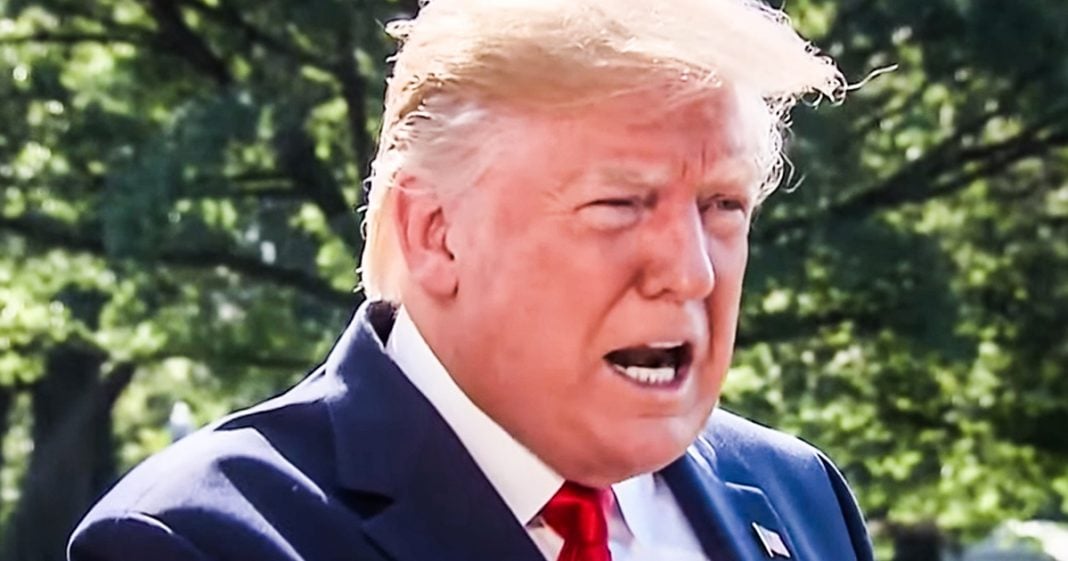 Donald Trump loves to brag about how awesome the stock market is, but he’s also responsible for some of the worst days that the market has had since he took office. Just this week, the President made the claim that his trade war with China will likely drag on past the 2020 election, which immediately sent the markets tumbling by 400 points. Ring of Fire’s Farron Cousins explains why Trump is so bad for the economy.

Donald Trump loves to brag about how great the stock market has been since he became president of the United States. And guess what, folks, for the most part, yeah, the stock market has continued to go up because that’s kind of what the stock market does. New companies come in and as long as we’re not in a full blown recession or depression, stocks do continue to gradually over time go higher. Happened during the Obama administration, didn’t happen during Bush because, you know, he was awful. But they’re happening right now under Trump, but not always. Not always. You see, there’s a problem with the stock market today that really only affects, you know, the top 1% but it does also affect the few people who do have these pensions that are invested in the stock market. And that’s why this is important. If it was only rich people losing money, I wouldn’t waste a second of breath on it, but we do have average working Americans who’ve got their pensions tied up in the stock market too. So it is important.

But anyway, earlier this week, Donald Trump mentioned that, hey, guess what? You know this trade deal with China that I’m trying to work out, I may just do that after the 2020 presidential election. Right? There’s no rush on this. Why, why, why push things ahead when they don’t need to be pushed ahead? And this is coming from the guy who only recently told us that, you know, China, the talks with China on the trade war are going swimmingly. They’re perfect. Oh, we’re going to have a deal super soon. And so this week he says, yeah, I don’t, maybe after the election. Who knows? And that immediately sent the stock market tumbling by roughly 400 points, marking the third day in a row of massive losses for the stock market. To make matters worse, you then had Donald Trump’s commerce secretary Wilbur Ross, woke himself up out of his nap, went on CNBC and said that the president isn’t under any time pressure to get a deal done. Well, the market didn’t like hearing that either. It’s bad enough when he says maybe it’ll happen after the election. Then you get sleepy Wilbur Ross coming in saying, who’s in a hurry y’all? Sit back and enjoy the trade war because as Wilbur Ross also said, this is going to take leverage away from China.

No, no, it’s not. It’s not going to take leverage away from China. It’s going to cost American taxpayers more than we’re already paying, which is $40 billion a year, by the way. China is doing okay. Their economy has not shrank to the same degree that ours has because of the trade war, it hasn’t. They’ve lost a couple points, sure. But nowhere near what the United States has lost. They have 100% of the leverage right now, folks. And what gives them even more leverage is that their government doesn’t care about their people. Now we know that our government also does not care about their people, but they have to at least pretend that they do. Right?

But we’re, we’re having to spend billions of dollars to bail out these farmers who are being decimated by the trade war. Farm bankruptcy’s at a now 12 year high in this country, and we’re just throwing tax dollars at them trying to buy their votes for 2020. It’s what Trump is doing and now he’s telling them, guess what, you probably have at least another year of this. So unfortunately, in spite of all of the other problems this country has, the next president of the United States who hopefully will not be Donald Trump, is going to have to come in on day one and put an end to this damn trade war that Donald Trump has put in place. It’s not going to be pleasant. It’s not going to be pretty, and it’s not going to be fair to the next person who’s taking over in the midst of all of these problems that desperately need to be solved, adding this one on top of it, but it’s what they’re going to have to do.

And I’m willing to bet it’s not going to end the way that Donald Trump wants, but it’s going to end the way that the majority of people in this country want it to end. Even if you have to just put things back to the way they were and then try to work out a deal later, fine, but you got to end the trade war, you got to reduce the tariffs and you’ve got to pray that Trump doesn’t follow through on his other promises of this week to start throwing tariffs on other countries, including many in Europe as well.