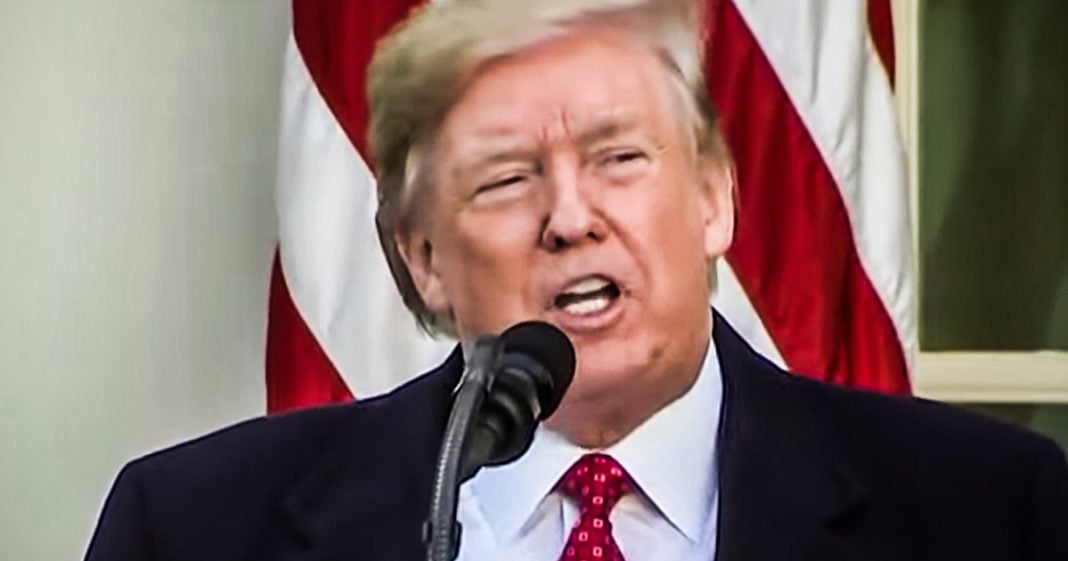 A group of several hundred psychiatrists and mental health professionals have sent a letter to Congress urging them take Donald Trump’s declining mental state seriously, and also warning of the consequences of his cognitive decline. The President is completely detached from reality, the professionals warn, and if we don’t do something about this matter now it could cost all of us in the long run. Ring of Fire’s Farron Cousins discusses this.

A group of several hundred psychiatrists and other mental health professionals have sent a letter to Congress urging them to include Donald Trump’s cognitive decline in their impeachment inquiry. The group is led by three people, one of them, Dr. Bandy Lee, who we have spoken about at length here at Ring of Fire. The other, George Washington University professor, Dr. John Zinner and former CIA profiler, Dr. Jerrold Post. Now, these three psychiatrists and mental health professionals are warning Congress in their letter that Donald Trump’s mental state is declining and it is declining rapidly. But that’s obvious to anyone with even the slightest little bit of psychology, but what they’re warning about is not just that it’s that there are going to be dire consequences if this is not addressed. Now, all three of those people have volunteered to testify in the impeachment inquiry, which is brilliant. Let’s bring them in.

Let’s hear it from these mental health professionals under oath, the people who, as they say in the letter, are trained to recognize these types of things. Let’s hear from them. Let’s put them on national TV. Let’s put them out there in these articles, telling the public what’s actually happening. That’s what needs to happen. Everyone needs to hear from these people because the vast majority of people in this country, probably 99% or more, aren’t going to read the letter to Congress. They’re not going to watch this video. They’re not gonna watch these other interviews or read these other articles where these professionals have been interviewed. What they will do, a good portion of them, is watch those impeachment hearings. And so that’s why this needs to happen. I’m going to read a couple of excerpts here from this letter because this is absolutely remarkable, and this is Dr. Bandy Lee.

Failing to monitor or to understand the psychological aspects of impeachment on Mr. Trump or discounting them could lead to catastrophic outcomes. We implore Congress to take these dangerous signs seriously and to constrain his destructive impulses. We and many others are available to give important relevant recommendations as well as to educate the public so that we can maximize our collective safety. And they’re right, this is a public safety issue. This man has the nuclear codes. This man is in charge of the military. This man is in charge of the FBI and the CIA. He has all of these tools at his disposal to do whatever the hell he wants anywhere the planet. That’s a danger. His tariffs that he put in place because he got mad at China are costing American citizens $40 billion a year. His policies of bending over backwards for corporations are making us breathe dirtier air and drink dirtier water and sending about 1300 people per year to an early grave. Those are dire consequences that we’re already living with.

Imagine what happens as this man continues, as these psychiatrists point out, to lose his grip on reality. He is detached from reality is what they say. They continue. The one thing we are trained to do is to distinguish between what is healthy and what is abnormal, and when the pattern of abnormality fits, then we recognize that it is pathology and not part of the wide variation of which healthy human beings are capable. What we recognize is a pattern of disease, and that may look like another political ideology or another political style to the everyday person who is unfamiliar with pathology, but to us it is a very recognizable pattern. His detachment from reality, his pathology is actually gaining ground more quickly than the ability of rational actors to bring up the facts. Meaning he’s getting too crazy that even we can’t fact check him or continue to diagnose him because it’s getting so bad. For years now, we have been saying, how about we listen to these people, but I’m going to narrow that focus down real quick. Congress, listen to these professionals. They want to come and talk to you. They want to add his mental health to the impeachment inquiry. Let them do it because this is a story the public needs to hear and they won’t hear it if you don’t invite these people to come testify.