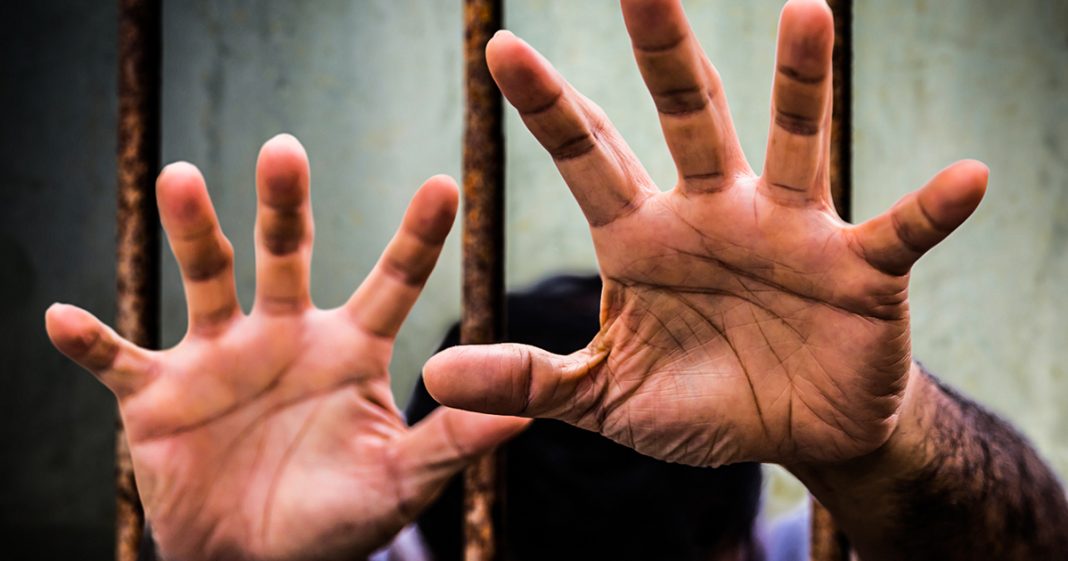 A judge recently ruled that a lawsuit brought by detained migrants against private prison company GEO Group can move forward. The detainees are alleging that the company is using them as slave labor, a claim that has been made by detained individuals in these prisons for the past 5 years. This lawsuit could have huge ramifications for the US, as Ring of Fire’s Farron Cousins explains.

Last week, a federal judge in California ruled that a lawsuit could move forward by former and current migrant detainees at private prisons across the country. Now these inmates, again, some current, some former, were housed in private detention facilities owned by two different groups, CoreCivic and GEO Group. Now this specific class action lawsuit as it has now been certified is only for GEO Group, but what these detainees are alleging is that GEO Group and CoreCivic and the other lawsuits are using them as slave labor. Forcing them to complete tasks and do items that other people should be paid to do, but they’re either not paying them or they’re simply paying them $1 per day. And this has been going on, these lawsuits have been going on, since 2012, 2012. Now, these allegations first arose in 2007, so we’re talking about a span of three different presidential administrations where this has been going on.

This is not a left or right issue. This is a humanitarian issue and these abuses have been overseen by both Republicans and Democrats. Now, I know neither Republican nor democratic politician was in charge of these companies, right? Yeah, but you’re in charge of handing out the contracts to these companies. You’re in charge of looking at the complaints from these companies, so you knew this was all happening, Bush, Obama, and Trump, and you did nothing. You did absolutely nothing as these detainees. People who probably shouldn’t have even been there because they’re just migrants coming to this country, they were being used as slave labor. Now, according to the contracts of these prisons, the only thing they are required or allowed, excuse me, to require these inmates to do is simple things like making their beds, keeping their living area clean, and stacking loose papers. Now that’s according to the contracts of these private prison companies.

That’s all you can make these people do without paying them, but they’re also having them go and scrub toilets, scrub windows, mop floors, basically act as janitors for the entire detention facility, which is a job that these groups are supposed to hire people to do and pay them to do. But paying those people to do it is going to cost these private prisons a little bit more money. You know, why pay somebody $7 an hour to mop our floors when we’ve got all these guys just sitting around with nothing to do. We got a few mops in the closet. Let them do it. We don’t have to pay them. We save a couple bucks per hour and these people get something to do with their time, even though technically it’s illegal under the United States law and under the contracts of these private prison companies to make them do it.

But we’re going to do it anyway because what’s going to happen? What the politicians going to tell us to stop? We’ve got them in our back pocket. We fund their campaigns. They’re not going to do a dang thing about it and they didn’t. They absolutely did not. But luckily there is still one group in this country that cannot be paid off, to an extent, and that is the federal judiciary. And that is why, again, last week the judge said, you know what, these lawsuits can move forward. You have presented enough evidence, you have made your case, your class is valid for the class action lawsuit of a couple thousand detainees. You’re going to get your day in court. You’re going to get to make your case. And here’s the thing, if this is successful, these private prisons could absolutely be destroyed, which is what needs to happen. We need a bigger spotlight on these private prisons who have higher rates of turnover, higher rates of abuse, higher rates of sexual assault, higher rates of escape.

Every measure of private prisons is worse than the federal or state run prison system. Every single measure, these groups are worse. They also cost us a lot more per inmate than the other prisons. But again, private prison CEOs fund a lot of political campaigns on both the left and the right. So don’t expect the politicians to do anything about it until we get a politician in the White House who isn’t taking any money from corporations. That may happen sooner than some people think.