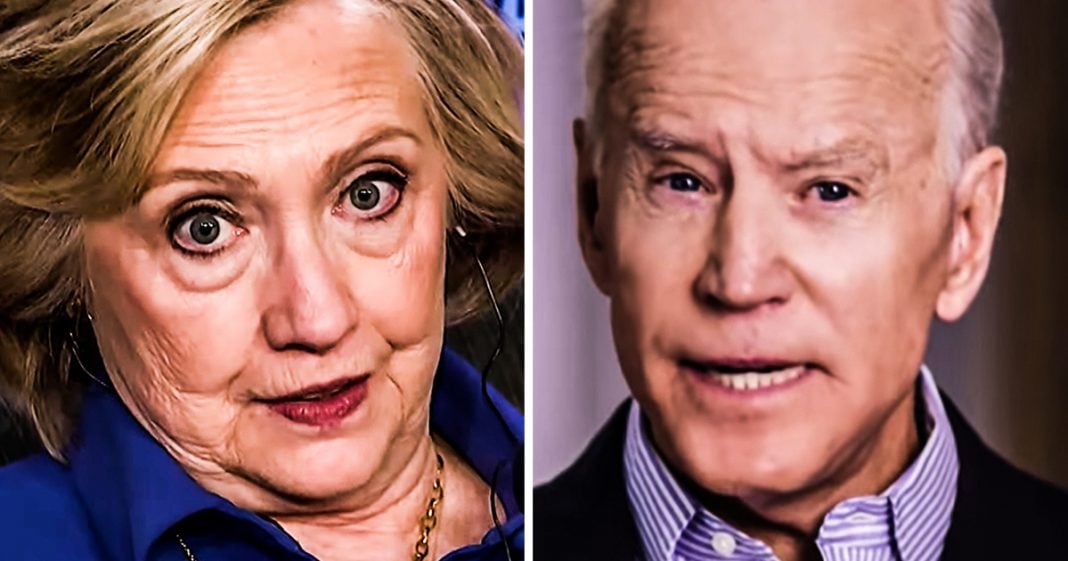 Joe Biden might still be the frontrunner in most polls, but he isn’t the candidate who can beat Donald Trump. In fact, all of the problems that Hillary Clinton had in 2016 are resurfacing with Biden, both the real and the imagined. And, like Clinton, some of the attacks on Biden are unfair, but that doesn’t mean that they won’t resonate with independent voters and swing the election back towards Trump. Ring of Fire’s Farron Cousins explains the parallels between Biden 2020 and Clinton 2016.

You know, as I watched Joe Biden’s unhinged rant at that Republican troll who asked him about his son earlier this week, it just made me realize several things, and also obviously the video that went viral this past weekend of Joe Biden talking about kids rubbing his hairy legs and sitting on his lap, and the Republicans always talking about Hunter Biden and Joe Biden and corruption and Ukraine and how they’ve done all these things wrong, even though they actually haven’t. It made me realize that Joe Biden is the Hillary Clinton of 2016 and another reason I say that, and I’m going to get into all the details in just a second, but we also earlier this week had Joe Biden’s campaign release an awesome ad attacking Donald Trump. Right? They played the clip of the world leaders from the NATO summit snickering behind Trump’s back, making fun of him. The whole ad was about how Trump’s a laughing stock around the world. It was a great ad. So were the ones that Hillary Clinton ran in 2016 that didn’t sway voters because she spent all her time talking about how bad Trump is, but not why she would actually be a good president and Joe Biden has already fallen into that same trap.

So yeah, great ad, horrible campaign message because it doesn’t say anything about why you would be better and based on your conduct from this past week, I don’t think you would be better. So here’s the thing, Joe Biden 2020 is the same as Hillary Clinton 2016. So let’s break it down a little bit more here. Right. In 2016 Hillary Clinton was viewed as the most electable person on the democratic side, which was a very weird thing, but Biden, same way, viewed as the most electable. But in both cases, 2016 and in 2020 Bernie Sanders wins in a head to head match up by a higher percentage than either Hillary Clinton did in 2016 or than Joe Biden does in 2020. So both candidates in spite of being viewed as the most electable are actually less electable than their rival Bernie Sanders. So they also have that in common. You have the issue that they’re both people that everyone is sick of. And I know that may not seem like a big deal, but folks, it actually is. You’re watching this video right now because you are involved in politics, right? You care about what’s going on, you’re educated, you’re informed.

Well, guess what? Most people in this country aren’t. They see the same names and same faces over and over and over and over and over and over and over for 30 or 40 years, whatever it is. And they’re tired of them. They were tired of Hillary Clinton. They were tired of her running for office over and over and over. They were done with her. They were sick of her. And they’re sick of Joe Biden. They are. We’ve seen him for far too long. Thanks for everything you’ve done, Joe. But there’s the door go away. So they also have that in common. They also have in common something that is very unfair to both of them. And that is the perception of scandal. These scandals, Hillary Clinton’s email scandal, Joe Biden’s Ukraine scandal, both of them were totally fake, fabricated by the right wing to smear these candidates. There was no their, there. These people did not commit any crimes, but Republicans think they did. And people who aren’t paying very close attention likely think they did. So that’s why it’s unfair. They didn’t do anything wrong and I will defend Biden and Hillary on those points as long as I have to. And I don’t like either of them, but I’ll defend them on that because it’s the truth. Truth is nonpartisan. But the perception, the perception of corruption is all it takes. It’s all it takes. And they both have that. Add onto that the fact that both of them have very weak centrist corporate policies, and it’s a recipe for disaster.

If Joe Biden is the nominee in 2020 Donald Trump will win a second term. That is irrefutable. We all see it happening. This guy doesn’t stand for anything. He’s arrogant. He’s crazy. He’s senile likely, we’re done. We’re done if Joe Biden becomes the nominee for 2020. So don’t be surprised in the coming weeks and months when I go a little bit harder on Joe Biden, because I know that out of anybody on the left right now running for president Joe Biden, maybe Marianne Williamson would be worse, but she is the only one who would be worse than Joe Biden as the candidate. I would rather see, you know, Buttigieg as the candidate than Joe Biden and Buttigieg has just as many problems as Biden, but he’s not as crazy. Biden will lose, and that is the message that everybody needs to remember. He is Hillary Clinton reborn, but unfortunately headed down that same path.